Israeli parliament approved the deportation of 40,000 Bedouin from their land

In order to Judify the Naqab, the south of Israel, Israel initiates a unilateral plan to confiscate Bedouin land. Most of the Israeli public remains indifferent

In order to Judify the Naqab, the south of Israel, Israel initiates a unilateral plan to confiscate Bedouin land. Most of the Israeli public remains indifferent 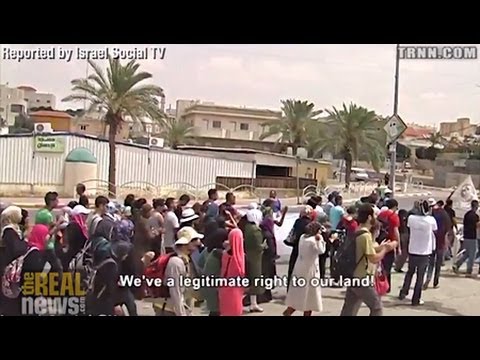 SHIR HEVER, TRNN PRODUCER: About 200,000 Bedouin live in the southern part of Israel, the Naqab, which is a mostly arid land, covering 60 percent of the territory of Israel. About half of them live in “unrecognized villages.” Most of these villages have existed before the state of Israel was even founded, but the Israeli authorities consider the residents of these villages to be “intruders.”

The Bedouin in the villages are Israeli citizens. Some of them even volunteer to serve in the Israeli military. But the state refuses to connect the “unrecognized villages” to the power grid, to running water, to roads, or to build health clinics and schools in the villages.

Instead, on June 24, the Israeli parliament, the Knesset, has passed the Prawer-Begin law to destroy these forty villages, to confiscate their land. Bedouin will not be allowed to live west of Road no. 40, in order to prevent them from accessing the best lands of the Naqab, and in order to establish a wedge of Jewish communities to separate between Arab communities on the west and the east. Between 30,000 and 40,000 people will lose their homes.

Partial compensations will be offered to the Bedouin who have been using the land and claim ownership of it.

DR. THABET ABU RAS, DIRECTOR, ADALAH IN THE NAQAB: First of all, this report is discriminate between Arabs and Jews in the Naqab. Jews have different alternatives of living here. Jews can reside in a city, in a town, in a rural community, in kibbutz, in moshav, ven they can reside in individual farms, while Bedouins have to push to townships, to be urbanized.

[incompr.] is discriminating between Bedouins and Bedouins while offering some compensation in land for those Bedouins who are living on their land, okay, and deprive that from Bedouins who kicked out [incompr.] of their lands in the ’50s of the last century, immediately in the first decade after the establishment of state of Israel. Most of the Bedouins actually lived in northwest of the Negev, of the Naqab, and they were pushed from that area.

HEVER: The extreme-right Jewish Home Party added another addendum to the law in the last minute. The Bedouin will have a limited time to collect their compensations. If they fail to do so in the time specified, they will lose their eligibility for any compensations. The Bedouin were not consulted regarding this plan, but the new addendum puts an extra pressure on them to take the compensations quickly, an act that will be interpreted as acceptance of the plan.

DR. AWAD ABU FREIH, COMMITTEE SPOKESPERSON FOR AL-ARAQEEB: We’ve a legitimate right to our land. We’re saying no to Prawer, no to the government’s plans, no to destroying homes, no to uprooting trees, immediate recognition of these villages, and no to this racist legislation. You cannot force just the Bedouins to live in towns, with no other options. Jews can choose between agricultural communities,, rural communities, towns. It’s incomprehensible to have a specila program to gather up the Bedouins in small impoverished settlements such as Rahat. We’re not talking about settlement regularization here. We’re talking about uprooting entire settlements, 40,000 people uprooted from their homes and forced to move to an unfamiliar place.

HEVER: This plan is the latest in a series of efforts to complete the ethnic cleansing project of the Naqab, a project known in Israel as the “Judification of the Negev.” In 1948, and again in 1951, the Israeli army has deported thousands of the Naqab’s residents. Twelve Bedouin tribes were forcibly expelled from Israel.

In 1991, the Israeli government approved the “Wine Road” plan, allowing Jewish farmers to establish about 100 very large farms with government subsidies, in exchange for keeping Bedouin out of their land. Because Bedouins can almost never receive building permits, they have no choice but to build their homes illegally.

The Israeli authorities, especially the Israel Land Administration and the Jewish National Fund (JNF), lead a house demolition campaign against the homes which Bedouins build without permit. In 2005, over 30,000 homes had a demolition order. During 2011, over a thousand homes were demolished.

PROTESTERS: Al-Araqeeb shall not die! We shahll not give in! We’ve a legitimate right to our land!

HEVER: Israeli blogger Yossi Gurvitz reports that according to a recent poll, Israeli society has been fed misinformation about the claims of the Bedouins. Ninety-three-point-eight percent of Israelis had no idea that the Bedouins claim ownership to only 5.4 percent of the Naqab’s land, and thought that they wanted more. Although Bedouins are today 30 percent of the Naqab’s population, and although they used to own nearly the entire Naqab, they are now being driven off the tiny piece of land which they use to sustain themselves with.

A third of the Knesset members never bothered to show up for the vote. No member of the Likud Party agreed to explain what the vote was about. The law, based on a government decision from September 2011, won the first reading by a margin of three votes.

The government and the media continue a campaign of incitement against the Bedouin, painting them as criminals. One Knesset member, Danny Danon, claimed that in 2011, 1,000 women and girls were seduced, kidnapped, or enslaved by Bedouin, even though the Israeli police did not record even one such case.

The Jewish National Fund, the JNF, plays a key role in the Judification of the Naqab. The fund secured a donation from the God-TV evangelical Christian television channel to plant a forest on the land of the Al-Araqeeb village in the Naqab. The bulldozers rushed to demolish the village’s structures, and the residents rebuilt. The bulldozers came again and again, so that the village was demolished over twenty times.

The JNF owns a great deal of lands in Israel, and also in the Naqab. The charter of the organization specifies that the JNF can only use the land for the benefit of Jews. The Israeli state decreed that the land has to be managed by the Israel Land Administration, which is a state institution and is therefore officially not allowed to discriminate. But on June 30, the Israeli Ministry of Housing decreed that the JNF will manage its lands on its own. The 600,000 acres owned by the JNF in Israel will therefore become apartheid land, where only Jews are allowed to live.