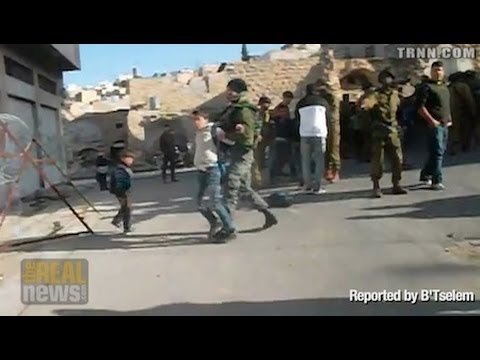 SHIR HEVER, ECONOMIST, ALTERNATIVE INFORMATION CENTER: In the second part of the story on Palestinian Prisoner Day, which took place on April 17, we’ll talk about the policies implemented by Israel regarding the imprisonment of Palestinians.

There are currently 4,900 Palestinian political prisoners in Israeli jails. Most prisoners are from the West Bank, but 190 are Palestinians from Israel, and 433 are from the Gaza Strip. Out of the 4,900 prisoners, 168 are held in administrative detention. No charges were pressed against them.

I’ve spoken to Gavan Kelly, advocacy coordinator for Addameer. Addameer is a Palestinian organization in support of Palestinian political prisoners held in Israeli and Palestinian prisons.

GAVAN KELLY, ADVOCACY COORDINATOR, ADDAMEER: Administrative detention is a procedure whereby Israel–it enables Israel to arrest and detain any Palestinian for periods of one to six months based on completely secret evidence. And these periods of detention can be renewed indefinitely.

So this obviously is a very, very–makes it very, very difficult to defend against, because the evidence against you is completely secret and is only made available to the judge and the prosecution. So at Addameer we regularly defend administrative detainees. But the simple fact is we don’t know what we’re defending against, because the evidence against the detainee is secret and not made available.

KELLY: Every year, about 700 children go through the Israeli military court system. This is not the number that I’ve chosen that are arrested–obviously, that’s a lot higher–but the number that go through the Israeli military court system. And what we’re seeing over the last number of years is children being targeted more and more and more. And they’re being targeted for a number of different reasons, particularly in the communities and the villages where there’s ongoing protests against the apartheid wall.

And the children are being targeted, as I said, for a number of reasons. Number one is to deter them from taking part in the demonstrations and the protests.

But just as important, they’re being, you know, arrested by the Israelis. When the Israelis will come in the middle of the night, they will ransack the child’s family home or apartments. They will, you know, blindfold them. And it’s from this moment of–from this very moment that the humiliation and physical abuse starts. A child will normally be taken into the back of an army jeep or an army Land Rover, where they’ll be beaten and abused. In many cases, their heads will be put down on the floor of the–for–the speakers and the music will be turned up very, very loud–again, Israeli policy is to disorientate whoever they’re there to arrest. And then they will be brought to an interrogation center, where they will face interrogation, you know, interrogation which involves ill treatment and, in many cases, torture.

So basically we have a situation here where children under the age of 18, anywhere between–usually between the ages of 12–but sometimes younger–12 and upwards to 18 that are either coerced, ill-treated, or tortured into signing a confession in a language they don’t understand, which is–they usually don’t understand, which is Hebrew, with no family member present, with no lawyer present. And then these confessions that are signed by the children are then used against the adult leadership of the protests and the demonstrations and are used to imprison the adult leadership.

So again what we see over the last number of years is an Israeli policy emerging will target children to imprison the adult leadership. And what is the overall idea is to suppress any form of resistance to Israel’s continued occupation and colonization.

And, I mean, a child is a child. I mean, they’re obviously a vulnerable group and they need extra protection. I mean, we had not too long ago here in Hebron where in one day, 27 children were arrested on their way to school, some as young as six years of age. I mean, what’s the idea here, you know, when Israel’s arresting six-year-olds, seven-year-olds, eight-year-olds? I mean, what does this mean?

But for the child it’s a lot different. I mean, one hour, two hours in the Russian Compound in Jerusalem or any other interrogation center has a huge psychological impact on the child and is immeasurable in terms of the damage it can do. I mean, the issue of child detention and arrest, imprisonment, ill treatment, and torture is huge here, and it’s something that we need to get more attention and something that at Addameer we focus on like other organizations do.

HEVER: Palestinian Prisoner Day was held on April 17, but the struggle against their incarceration continues throughout the year by organizations such as Addameer.

Israeli troops, in an attempt to silence the criticism, have raided Addameer’s office in November 2012.

I mean, Addameer, like many other organizations here in Palestine, works under extremely tense and extremely violent situation or environments. I mean, in Addameer I can count maybe three or four different things that have just happened over the last few months.

In December 2012, the Israelis paid us a visit during the middle of the night where they kicked down our door. They came in and ransacked our offices. They stole our computers. We presume they copied everything from our server, which again, you know, obviously causes Addameer a disruption. But for Addameer, I mean, we can recover. I mean, everything’s on our website. I mean, we’re completely transparent. I mean, they wanted to send us a message. And they wanted to send us a message because we have been so vocal and prominent, particularly over the last couple of years in relation to the hunger strikes.

On 15 October 2012, Ayman Nasser, our researcher, who had been working for Addameer–still works for Addameer–for six years, again, the usual: got a visit from the Israelis in the middle of the night, kicked down his door, ransacked his house, stole his computer and mobile phones, etc. And Ayman proceeded to be in interrogation for 45 days. And during these 45 days, the interrogation sessions lasted up to 20 hours, with Ayman continually handcuffed behind the chair. When Ayman wasn’t in interrogation, he was in isolation. They held him in an isolation cell, which was two meters by two meters with no natural sunlight, only one fluorescent light, a blanket, one blanket, and an air conditioner. But the air conditioner was on cold constantly. Again, this is a form of torture. Ayman’s currently standing “trial”. I say the “trial” in inverted brackets, ’cause there’s no such thing as an impartial trial in an Israel military court, by definition.

I mean, Israel can only respond in one way, and only one way it knows, which is violence, whether that’s the violence on Addameer, the violence on the prisoners, the economic violence it puts on the Palestinian Authority, or whatever. There’s only one reaction. And this is a typical reaction of any colonial power. We shouldn’t be surprised.

HEVER: The struggle to free political prisoners has drawn attention from international activists and organizations. Israeli authorities are concerned how this affects Israel’s image.

KELLY: Let me just first of all thank, I mean, everybody around the world for their continued support in terms of not just the prisoners issue, but also the issues related to Palestine. I mean, we’re very–you know, we’ll be eternally grateful for the work that people do around the world. And without your support, we’d be in a far worse situation than we are now, even [incompr.] things as bad as they are.

I mean, for prisoners we have to look at things–we can’t look at things and just focus on one issue. I mean, we need to look at things collectively. Prisoners are an important issue, obviously, and they play a central role in Palestinian society, and they will continue to do so. But there are obviously the other issues that are, you know, just as important that people are focusing on, you know, the BDS campaign and, you know, Stop the Wall, and the situation in Gaza, of course, and many other different issues.

For prisoners in particular, I mean, when we ask for support or when people ask, you know, what should we do or how can we help, there’s a number of different options. I mean, obviously, you know, being organized is the most important thing. I mean, someone once said that the future belongs to those who are organized. And that’s completely true. I mean, as individuals we can work better collectively as we can individually. And first of all I think we need to inform ourselves, inform ourselves of the situation here. And then once we do that, I think we need to inform those around us, family or friends, and ideally to organize into solidarity groups or whatever.

But, you know, apart from the political pressure and the lobbying and the advocacy and etc., etc., we always get back to BDS–boycott, divestment, and sanctions. And why do we do this? You know, what’s the connection between prisoners and BDS? Well, BDS is the primary tool internationally to bring an end to Israel’s continued occupation and colonization. And one only has to compare Palestine to South Africa to realize this. I mean, the boycott of South Africa started in the 1950s by South Africa and Lebanon, Sweden. I mean, in Palestine the call for BDS was only made in 2006, and there’s already been huge progress been made, which is very encouraging.

So when we ask people what can we do about prisoners, the political action is important, I mean, the direct action, that is, the activism, etc. If you’d like to get involved with Addameer’s campaign, as I said, our administrative detention campaign is available on www.stopadcampaign.com, or you could visit our main web page, which is www.addameer.org.

HEVER: An example of such an action was a call to boycott the company G4S, an international corporation which provides security services to the Israeli government in the occupied territory.