Gavan Kelly: This year's Prisoner Day marked by hunger strikes of Palestinian prisoners who pay a heavy price in order to raise awareness of their plight

Gavan Kelly: This year's Prisoner Day marked by hunger strikes of Palestinian prisoners who pay a heavy price in order to raise awareness of their plight 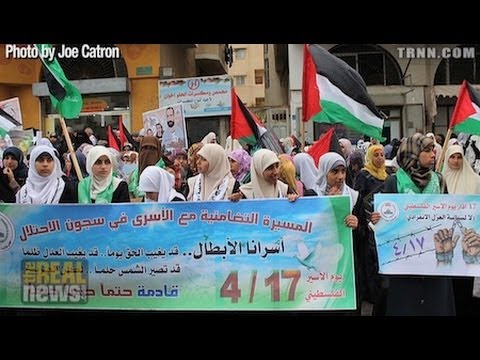 SHIR HEVER, ECONOMIST, ALTERNATIVE INFORMATION CENTER: In any military occupation, imprisonment is a tool used heavily by militaries in order to control the occupied population. Israel is no exception, and the arrest and long-term imprisonment of Palestinians in the occupied Palestinian territory has become one of the symbols of the Israeli occupation.

This is the first of a two-part story on Palestinian Prisoner’s Day, which took place on April 17.

I’ve spoken to Gavan Kelly, advocacy coordinator of Addameer. Addameer is a Palestinian organization in support of Palestinian political prisoners held in Israeli and Palestinian prisons.

HEVER: Nearly 2,000 prisoners went on hunger strike in 2012. Some of them have kept it up for months.

HEVER: Concerned that the actions supporting Palestinian prisoners will grow into a full-fledged rebellion, the Israeli government tried to reach an agreement that will diffuse the protests.

KELLY: There was an agreement. So let’s talk about the agreement. The agreement at the end of the mass hunger strike consisted of five different elements. The first was an improvement in prison conditions. The second was the end to isolation as a policy. The third was the use of administrative detention in exceptional circumstances, as it is correct under international law. The fourth was the reintroduction of education, which had been taken away after the resistance in Gaza arrested the Israeli soldier. And then we have the fifth element, which is the resumption of family visits for Gaza prisoners, which again was taken away after the resistance arrested the Israeli soldier.

Fast forward to–this was in–the agreement was in May 2012. Fast forward now to April 2013. Out of five different elements of the agreement, Israel has honored one, and this is the Gaza–the family visits for Gaza prisoners. So four other elements–prison conditions still haven’t been improved; policy of isolation is still in place, although the numbers have decreased; administrative detention definitely hasn’t changed; and education to the prisoners still has not been reintroduced. And this creates alarm bells, I mean, for Addameer as an organization, and it creates serious alarm bells.

If we have to look at the situation in Palestine in 2013, exactly the same situation has happened here. I mean, the Israelis are pushing the prisoners into a corner.

And we’re–I mean, Addameer is–and I’m sure, you know, all Palestinians are very worried that we’re going to get to a stage where people, the hunger strikers are going to begin to be carried out of the prisons in body bags, and this is obviously something that we don’t want. So, I mean, [incompr.] Samer and the other hunger strikers, everybody–I mean, not one day goes by where at least one or two hunger strikers isn’t literally on the verge of death.

HEVER: By putting themselves in risk of death, Palestinian prisoners are hoping to raise awareness to the fact that their incarceration, and their resistance, is political. Prisoners, which Israeli authorities refer to as rioters, terrorists, or security threats, would not have been in Israeli jails had there been no occupation. But extended hunger strikes put the prisoners in mortal danger and cause irreparable damage to their health.

KELLY: Nobody knows the reaction. I mean, obviously there’s going to be a huge reaction on the Palestinian street if one of the hunger strikers dies, and nobody can, you know, foresee what’s going to happen.

But we also need to–you know, when we talk about April 17 and the Palestinian Prisoners Day, we’re talking about the hunger strikes, but we actually–we need to kind of look at it from a bigger picture. I mean, even though the prisoners are confined to their cells, they have the ability to inspire and mobilize the masses like very few others. If we look at the ongoing protests around Palestine, a lot of that inspiration came from the prisoners and the sacrifices that they have made. I mean, so it’s very–I mean, I think the prisoners have a huge amount of influence out there, not only confined to their cells, but outside, as has been shown. And hopefully that will continue to be the case.

HEVER: Every year, Palestinian Prisoner’s Day is commemorated in Palestine and around the world to protest the arbitrary imprisonment of Palestinians by the Israeli authorities.

KELLY: Palestinian Prisoners Day, which is held on 15 April every year, and to commemorate all those prisoners, the hundreds of thousands of prisoners that have been–gone through Israeli arrests, detention, interrogation, torture, and imprisonment. And it’s a very special day, as I mentioned, because it’s so close to people’s heart.

HEVER: In one case, at least, the hunger strike and the protest bore fruit. Samer Issawi agreed to end his 250 days old hunger strike after the Israeli authorities agreed to reduce his remaining sentence to eight months. Initially he was sentenced for 30 years.