Palestinian Authority Budget 28% for Security Forces – Funded by US

Shir Hever: US funds to the PA are earmarked for security forces that control militant opposition to Israel's occupation

Shir Hever: US funds to the PA are earmarked for security forces that control militant opposition to Israel's occupation 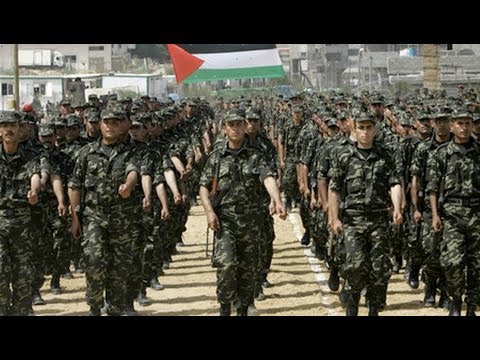 With President Obama having recently visited Israel and John Kerry now going back and forth between President Abbas and Prime Minister Netanyahu and trying to (what they claim) restart the peace talks, there’s a piece of this story that does not get discussed very much, and that is just how close the Palestinian Authority is to the United States.

Now joining us to talk about all this is Shir Hever. He’s an economist studying the Israeli occupation of Palestine. He works for the Alternative Information Center. He’s also now working with The Real News Network.

Thanks very much for joining us, Shir.

JAY: I should mention you’re coming from Germany, where you’re working on your PhD right now.

So talk a bit about the relationship of the—now calling itself the state of Palestine and the United States.

HEVER: The state of Palestine is a new state, because in November 2012 the Palestinians were able to get the vote in the UN to be recognized as a state.

But one of the ways that we can see that there’s still a long way to go before Palestinians are really free of Israeli occupation and can claim any kind of sovereignty whatsoever is through the budget. And last week the Palestinian state managed to pass their budget for 2013, and they only passed it one day before the final deadline, the last day they could do that, according to the Constitution.

And the reason for that very last-minute passing of the budget is no coincidence. It has a lot to do with the visit of Obama and, later, Kerry, because the state of Palestine is not yet sovereign when it comes to money and their income. In fact, income tax only accounts for 7 percent of the total income of the state of Palestine, formerly known as the Palestinian Authority.

What we see is a budget that is heavily dependent on international aid, and also dependent on money that is transferred through Israel, because Israel is levying some of the taxes on behalf of the state of Palestine.

And this budget is also very much constricted, because we’re only talking about the West Bank, while the Gaza Strip, where the Hamas Party is in power, officially is supposed to be part of the state of Palestine, but in practice the Palestinian leadership in Ramallah don’t have much influence or much authority over what’s happening in Gaza and very little ability to actually deploy their resources there, mainly because of the siege employed on Gaza by Israel.

But I think that there is a very big difference here which perhaps many U.S. congresspeople and senators didn’t quite understand, that the money that Israel is transferring to the Palestinians it is obligated to transfer by law. And therefore also the Palestinians can do with that money what they want, more or less, or they can use the budget how they see fit.

But the money that’s coming from the U.S. is earmarked. And, in fact, it is earmarked to projects that the U.S. has originally planned in such a way that they believe would support Israel more than the interests of the Palestinians. And the result of that is we see this newly approved budget of the Palestinians. Between 28 and 32 percent of the budget goes to security. And that’s quite significant.

HEVER: Exactly. And this is something that has to be stressed again and again. The Palestinians security forces have been trained by people like General Dayton, the U.S. general who trained these forces in Jordan, and trained them with very clear and strict instructions that they’re not allowed to act against Israeli colonists or Israeli soldiers. So they’re actually not defending the state of Palestine. They’re not struggling for freedom or to protect Palestinians from Israeli aggression. The Palestinian security forces are not even allowed to operate in the vast majority of the West Bank. In the so-called Area C and Area B their deployment is not allowed. They can only operate in Area A, which is 22 percent of the West Bank.

JAY: And one thing I found when I was in Ramallah a couple of years ago which I hadn’t understood: the numbers of Palestinian activists that get arrested because the Israelis want them arrested. But they actually get arrested by the Palestinian security forces and then [incompr.] I guess, handed over to the Israelis. Is that correct?

HEVER: Well, it is partially correct. Some of them are not handed over to the Israeli authorities but are kept in jail within Palestinian prisons. And, in fact, as soon as the Palestinian Authority was established, it started a mass arrest campaign against Hamas activists. I’m talking about thousands of people who were arrested and imprisoned for prolonged periods of time. And you could see at the same time there was a drop in the number of Palestinian prisoners in Israeli jails.

But from the Israeli perspective, that’s a completely different thing. The Israeli government saw the Palestinian Authority as a sort of contractor, contractor for Israeli interests. And, in fact, a lot of jobs that were done by Israeli soldiers and Israeli police in the West Bank and the Gaza Strip—internal checkpoints, arrests, house searches, interrogations, and so on—are now carried out by the Palestinian police instead.

And when the Palestinian Authority was established in 1994, then prime minister Yitzhak Rabin of Israel actually justified to his own cabinet why the Palestinian Authority is so needed, because he was concerned that Israeli soldiers are not training for the next war and are instead doing this police work that is very bad for their combat readiness for the next war. And what he said is we need somebody to take care of that area or to control that area, but without the intervention of the Israeli high court and the human rights organizations. And he saw the Palestinian Authority as that kind of contractor, a long arm of the Israeli government in the West Bank and the Gaza Strip.

Now, again, it’s important to stress that doesn’t mean that Abbas, president of Palestine, or those police officers themselves see themselves as if they are working actually for Israel. But what Israel is trying to do is to manipulate them into this position where they’re actually enforcing Israel’s own interests in the occupied Palestinian territories. And the United States is doing a lot of that pressure on Israel’s behalf, mainly in the form of outfitting, training, and supplying those security forces.

JAY: And putting money directly into the Palestinian state budget to do all of this.

HEVER: Yeah. But when that budget is earmarked for security, you get this sort of very strange budget of a state that isn’t even sovereign, that isn’t even free, but already has one of the biggest military budgets in the world. But it doesn’t actually have any military, military budget, of course, in proportion to the total budget, not as a total number. The total budget of the state of Palestine is $3.8 billion, which is about 4 percent compared to the budget of Israel. So we’re talking about a very small amount of money anyway for quite a large population compared to—because Palestinian—there are half as many Palestinians as there are Israelis. So rather than seeing that their budget—.

JAY: So what are these security forces doing? Are they there primarily to try to stop various forms of armed resistance against Israel? Or are they just doing—a certain amount must be, I suppose, normal police action, isn’t it?

HEVER: That is of course part of it. And part of these efforts are also in certain cities in Palestine where resistant groups have armed themselves and created a certain amount of authority in their local town, which also has some negative implications, because that sort of authority that those armed groups may have is not just about resisting Israeli occupation, but can also do—could also lead to internal violence between various factions.

So one of the things the security forces do is try to keep the peace in the streets. But they also man checkpoints inside the West Bank. And they also protect the Palestinian government, which one should remember—Salam Fayyad, the current prime minister, has not been elected. He was appointed as prime minister. And he doesn’t have a lot of popular support, but he does have those security forces protecting him from popular protest. We’ve seen how these security forces were operating during Bush’s visit to Palestine, George Bush’s visit, and later Obama’s visit, keeping people from protesting against that visit.

And these security forces, one, I think, very good example of how they operate is a rather tragic story that happened in 2009, where a car full of Israeli soldiers have infiltrated a Palestinian city, the city of Bethlehem, while they were dressed as Arabs. They were trying to pretend to be Hamas activists, actually, for some kind of espionage activity in Bethlehem. A Palestinian police officer stopped the car and searched it and found weapons in the car, and believing that they are actually Hamas activists, he was trying to apprehend them. They shot and killed that police officer. So these Israeli soldiers killed the Palestinian police because what he was actually trying to do was prevent Hamas activists from operating in the West Bank.

And I think that story kind of tells this sort of impossible situation that’s enforced on the Palestinian security forces and raises the question why do Palestinians actually need so many security officers. At the moment, 41 percent of all public-sector workers who work for the state of Palestine are actually in the security sector.

JAY: Alright. Thanks for joining us, Shir.