Calls for One Democratic State in all of Palestine Increase

Twenty years after the Oslo Accords which promised to end the Israeli occupation with a two-state solution, the alternative democratic solution is gaining traction

Twenty years after the Oslo Accords which promised to end the Israeli occupation with a two-state solution, the alternative democratic solution is gaining traction 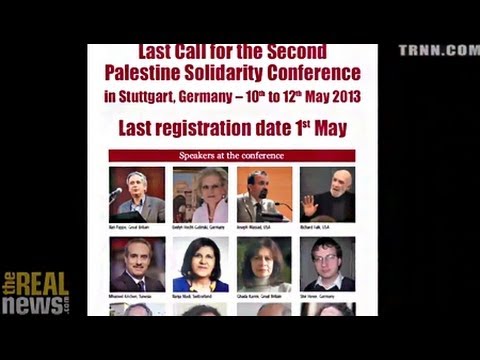 SHIR HEVER, TRNN PRODUCER: Between May 10 and May 12, a conference took place in Stuttgart, Germany, dedicated to the establishment of the one democratic secular state on the entire area of Palestine. I’ve also taken part in that conference.

While the mainstream media and all European governments, as well as the U.S., speak frequently about the two-state solution, the establishment of a Palestinian state in the West Bank and the Gaza Strip based on the ’67 borders, there is little mention of the fact that negotiations have been going on for 20 years, and that during that time, the number of illegal Israeli colonies and their population has increased dramatically, placing obstacles to the two-state idea.

ILLAN PAPPE, UNIVERSITY OF EXETER: I was asked yesterday by a journalist, who do you represent, the people who are here? How can you take any decisions when you are only representing yourself? And I said, well, it’s not true. We represent first and foremost all of those groups and peoples and ideas that were excluded by the two-state paradigm and idea. This is a conversation about the future of Palestine between refugees, between Palestinians inside Israel, between Palestinians from the occupied territories who live there and who are not allowed to go back there. We are talking between us about a one-state solution.

And it’s not only the solution which is important, but the fact that we include all of us in the conversation about the future, whereas the Oslo process was very strict in saying who is allowed and who is not allowed to be part of that conversation.

HEVER: This was the second such conference in Stuttgart. The first conference took place in November 2010. It was so controversial to hold such a conference in Germany that the organizers were forbidden from holding the conference in a venue of their choice and had to make do with a smaller room.

ALI ABUNIMAH, JOURNALIST: –three years later, in November 1989, that the wall cracked and later collapsed. And so one thing we learned from the history of Germany is to expect the unexpected.

And I think that we have to also expect the unexpected in Palestine, that a system of oppression that is so real and so harmful and so devastating to the lives of millions of people seems permanent but is not, and it can be ended, and I think it will be ended. And we have to start with what our vision is for the end, I think.

And this goes back to the theme of the conference, separated in the past. Actually, I would like to make one correction: separated in the present, not in the past, and together in the future. And that should be our vision, that Israelis and Palestinians can live together under conditions of full equality. This is the most important thing.

HEVER: The conference in 2010 stressed the fact that the two-state solution focuses only on a third of the Palestinian population in the world. It doesn’t offer guarantees for the equality of the 1.5 million Palestinian citizens in Israel. Sovereignty for a Palestinian state in the West Bank and Gaza also doesn’t exempt Israel from its obligation to recognize and implement the right of return of about half a million Palestinian refugees.

LUBNA MASARWA, FREE GAZA MOVEMENT: The last two years, I had the chance to go to Gaza with boats to break the siege with the Free Gaza movement. I had been in Gaza twice, and the other two times I was arrested, one in the last year in the Spirit of Humanity, and the second time was this one after the Mavi Marmara.

I should say that Gaza is far away from my home only one hour, but we are not allowed to get in there. I was flying to Cyprus and sailing 20 hours to Gaza, and when I arrived, I saw Ashdod city in Israel, and I was shocked, because only then I recognized how unrealistic is our lives and how separated we are.

But the visit in Gaza helped me to understand the siege as a policy. It’s not only about Gaza. The siege is a policy that was used before in Beirut. It was used in Iraq. And it’s used in Palestine in different areas. Gaza is under siege. The West Bank is under siege. East Jerusalem is under siege. And the Palestinian [incompr.] under siege. The different with Gaza, that in Gaza it’s hermetic siege. And this is how is the situation. When the wall will be accomplished in the West Bank, this is the situation going to be. [kaIb3`] actually didn’t see his sister in Bethlehem for more than six years, Bethlehem away from Gaza maybe one hour driving. [mazImkAn’[email protected]] can see Jerusalem from his house, but he can’t go to Jerusalem. A German or a tourist can come from the U.S. or Germany and can visit the holy land. Palestinian kids in the West Bank can see the sea and the beach from the roof, but they never visited or see or have the chance to go to the sea.

HEVER: This year, the conference drew several hundred audience members and was covered live by Al Jazeera. It came at a time in which discussions about the possibility of establishing a single democracy in the area of Palestine becomes more common. A group of Palestinian activists, including senior members of the Fatah Party, have published a call to abolish internal borders and treat all who live in Palestine, Arabs and Jews, as equal citizens. Secretary of State of the U.S. John Kerry said that there are only two years left before the two-state solution will no longer be relevant. This May, speakers in Stuttgart, Palestinians, Israelis, and internationals from around the world, have argued that a democracy in which everyone are equal citizens is not the second-best solution if the two-state negotiations fail but is actually a preferable arrangement.

HEVER: Yoav Bar from the Haifa Group represented Jewish-Israeli voices that are rarely heard in the mainstream media.

YOAV BAR, HAIFA GROUP: Again, the question of the liberation of all of Palestine as one democratic state is a way to reunite the–politically reunite, in the vision reunite, and then on the ground to reunite the struggle of the Palestinian for one cause, for one solution for all the Palestinians.

And it also implies about the solution, the unity of Arabs and Jews in the struggle against Israeli apartheid, because if you support the partition of Palestine, if you say, I am, like some people say, I am for two state for two people, then what you actually tell to the Jews in Palestine? You tell them that you should do peace with the Palestinians through your government. Like, you are one side, the Palestinians are the other side, and then there is negotiations. And negotiations, of course, there is–everybody want to get more for himself. So you actually, by supporting the two-state solution, you actually perpetuate the struggle, perpetuate the conflict, and you push Jews in Palestine back to the hands of the Israeli government in negotiations that don’t serve anything.

So through the common struggle against Israeli apartheid, for living together in one democratic state, you [inaud.] today, not at the end after you make the one democratic state, you create today the conditions for real partnerships between Arabs and Jews in Palestine in the struggle against this regime which is not in the interest of anybody, because it only creates more wars, more hatred, and more problems for everybody.

HEVER: Ranja Mahdi from Badil stressed the importance of addressing the historic rights of Palestinians, not only those living under direct Israeli occupation, but those who have been forcefully deported from their homes and live in the diaspora as well.

RANJA MAHDI, BADIL: Palestinian refugees, if we look internationally, constitute one of the largest and longest-standing unresolved situation of displacement in the world. This is mean half of all refugees in the world are Palestinians, which means 66 percent of the entire population of the Palestinians are refugees. This is a unique case.

Of course, one democratic state means that the Jewish state, in the sense of a state in which Jews enjoy extra privileges and non-Jews are treated as second-class citizens at best and as enemies and terrorists at worst, would end. Yet the speakers in the conference, just like the new Palestinian one-state initiative, emphasized that a democratic state would protect the rights, liberties, and safety of all its citizens.

The entire proceedings of the Stuttgart conference can be watched in the link which now appears on the screen.