Kerry’s Attempt to Restart Negotiations in Israel/Palestine Has Failed 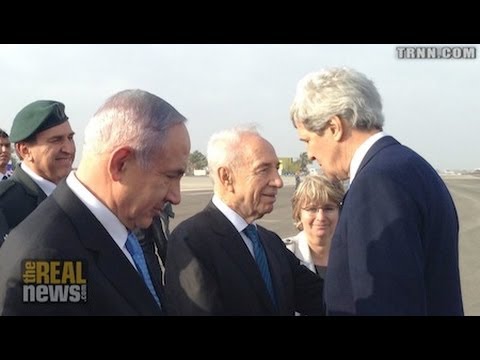 SHIR HEVER, ECONOMIST, ALTERNATIVE INFORMATION CENTER: Shortly after President Obama’s visit to Israel and the occupied Palestinian territory, Secretary of State John Kerry began a series of visits and talks with Israeli and Palestinian leaders. Kerry returned in an effort to speak with both sides and restart the negotiations.

The negotiations have been stuck since September 2010. While the Israeli government claims to be eager to continue the negotiations and blames the Palestinian side of refusing to talk, it continues to expand the illegal colonies in the West Bank and to place severe restrictions on Palestinians in the occupied territory. Netanyahu has also added an additional demand: that the Palestinians recognize Israel as a Jewish state. As Israel didn’t need the recognition of other countries in order to define itself according to its own laws, Netanyahu’s demand is perceived as a tactic to further delay negotiations.

The state of Palestine, formerly known as the Palestinian Authority, has placed a single condition to resume talks:– that Israel will freeze the construction in the illegal colonies. President Mahmoud Abbas has also demanded the release of Palestinian political prisoners held in Israeli jails. But the Palestinian public is wary of broken promises. Even if Israel meets these conditions, what is to guarantee that it will not be yet another delaying tactic? Negotiations have begun in 1992, and the end of the Israeli occupation is still nowhere in sight.

Obama gave a rousing speech in Jerusalem, calling on Israelis to respect Palestinian rights. He did not give a similar speech directed at Palestinians.

BARACK OBAMA, U.S. PRESIDENT: I believe that peace is the only path to true security. You can be—you have the opportunity to be the generation that permanently secures the Zionist dream, or you can face a growing challenge to its future. Given the demographics west of the Jordan River, the only way for Israel to endure and thrive as a Jewish and democratic state is through the realization of an independent and viable Palestine. That is true.

HEVER: But despite the powerful speech, why would another initiative to resume negotiations now succeed when countless such initiatives failed in the past?

Secretary of State John Kerry seemed certain that this time it would work. The U.S approved the resumption of aid to the Palestinians, enabling the State of Palestine to pass its budget for 2013 at the very last moment. Kerry’s multiple visits and meetings also sent the message that efforts to reach a compromise are at full force.

Perhaps the U.S is concerned that the legitimacy of the Palestinian leadership in Ramallah is declining the longer they are unable to make any achievements in ending the occupation. Perhaps the growing involvement of Qatar in the region and the cordial relations forming between the Qatari government and the Hamas party, which currently controls Gaza, is a threat to U.S. monopoly in its influence over the region.

The current strategy of President Abbas and the Fatah Party is to appeal to international organizations—the UN, the International Court of Justice, etc.—in order to accumulate international legitimacy and expose the illegality of Israel’s policies. The Israeli government is very concerned about these moves, because in addition to condemnations by the UN, it could lead to the arrest of Israeli soldiers and former soldiers on suspicions of war crimes when they travel outside of Israel.

But President Abbas agreed to postpone the next move in appealing to the International Court of Justice, to give the U.S-brokered peace initiative a chance. Perhaps he was also concerned that making such a move while Kerry is visiting will reflect badly on the Palestinian’s willingness to negotiate in good faith. Kerry therefore achieved a small victory for Israel: a further delay in making Israel accountable for its actions in the Occupied Territory.

Kerry has reportedly offered economic benefits to the State of Palestine in exchange for restarting the negotiations. For example, he suggested that a few economic projects for Palestinians could be permitted in Area C of the West Bank (which comprises about 66 percent of the West Bank), something which Israel currently forbids.

Kerry then proceeded to mention the Arab Peace Initiative of 2002. The initiative, nicknamed the “Saudi Initiative”, was accepted unanimously by the Arab League in 2002 and has been ratified every year ever since. The initiative offers Israel a package deal: Israel will return to the internationally recognized ’67’ borders, will reach an agreement with the Palestinians for the resolution of the Right of Return of Palestinian refugees from 1948, and in exchange all Arab countries will sign peace treaties with Israel.

The initiative is in many ways the embodiment of the most sought-after goal of the Zionist movement. Israel will become secure, recognized, and peaceful. But as Israel’s borders have expanded in military occupation, so have its ambitions. The Israeli government refuses to discuss the Arab Peace Initiative.

Kerry suggested that the Palestinians change the initiative so it will suit Israel, perhaps by allowing Israel to retain some of the territory it occupied in 1967, or by denying the rights of Palestinian Refugees.

The fact that Kerry also made efforts to bridge the gaps between Israel and Turkey further demonstrate the point that Kerry’s visit to the region has coincided with Israeli interests, not with Palestinian interests.

Rebuffed by the Israeli side, Kerry said that he has “homework to do,” and left. An Israeli official hinted that Kerry’s hubris has let him to believe that he could succeed where so many have failed.

But Kerry’s failure stems from a deeper reason. As long as the power relations between Israel and the Palestinians remain drastically unequal, there is no incentive for the Israeli government to abide by international law and to respect agreements which it had signed.

The massive military aid which the U.S. gives to Israel, to the tune of $3 billion annually, and over six times the aid to Palestinians, contributes to the unequal power relations. Kerry did not hint that Israel’s insistence to continue the occupation could lead to a reduction in U.S. support.

This is Shir Hever for the Real News.