Shir Hever: Israeli forces proven to be using Palestinian children as human shields despite attempts to cover it up to protect image

Shir Hever: Israeli forces proven to be using Palestinian children as human shields despite attempts to cover it up to protect image 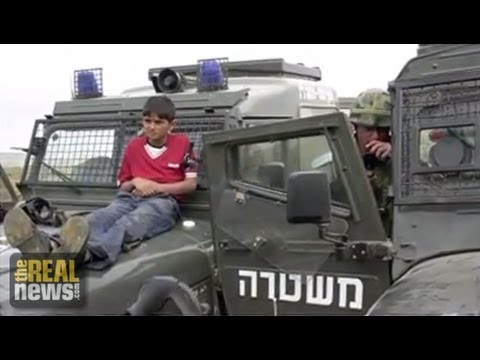 A United Nations human rights body recently accused Israeli forces of abusing Palestinian children. There is a whole list of abuses, ranging from torturing those in custody and using others as human shields.

Here to discuss all this is Shir Hever. Shir is an economist studying the Israeli occupation of the Palestinian territories for the Alternative Information Center, a joint Palestinian-Israeli organization dedicated to publishing alternative information and analysis.

Thank you for joining us, Shir.

SHIR HEVER, ECONOMIST, ALTERNATIVE INFORMATION CENTER: Thank you for having me.

DESVARIEUX: So, Shir, what is actually new about this report?

HEVER: In many ways this is not new at all. The Israeli forces have been abusing Palestinian children ever since the occupation began, and especially starting from 1987 with the first intifada. Israel has arrested thousands of minors, and as young as seven years old, and have kept them in solitary confinement at times. Some of them were kept in administrative detention, which means that no charges were pressed against them and they were nevertheless kept in prison. And that sort of treatment certainly is not something new, but periodically the international organizations look a little bit more into that.

Now, what’s starting to be a bit new now is the fact that an Israeli organization, actually, called B’Tselem published a report called No Minor Matter. And this report was published in 2011. It takes the UN a little bit of time to process this data, and they found that based on this information, there is a real concern that the human rights of Palestinian children are regularly violated by the Israeli army and by the Israeli police. And now they published their report two years later, by the United Nations Human Rights Council.

DESVARIEUX: And why would the Israeli government continue to do such things, continue with these practices, essentially, if it’s just such terrible PR for them?

HEVER: The Israeli government is very concerned about its international image, and you’re right that the sort of activities that the Israeli government is doing, when they get publication, when there are videos that come out that show Israeli soldiers beating Palestinian children or torturing them, that is something that of course harms Israel’s image around the world.

I think the Israeli government is much more concerned about the image than about the moral concerns, than about the actual lives and safety of Palestinian children. And indeed the Israeli government is trying to limit those bad-looking incidences, those bad PR instances. In a law from September 2011, Israel has recognized for the first time after about 45 years of occupation that Palestinian children would be considered children until the age of 18 rather than until of age of 16. So they would have the same age categories as Israeli children.

But despite that decision, Palestinian children are still being tried by martial court, by military court, and in the Hebrew language, which is not their language, so often they don’t understand what they’re being accused of, what they’re signing, what they’re admitting. They are not allowed the rights to see a lawyer, to have an adult or their parent in the room while they’re being interrogated is not observed. So these violations continue.

And one of the reasons for this is that there is a sort of disconnect inside the Israeli political and military system between the part that looks outward, that tries to improve Israel’s foreign relations, and the part that looks inward that is more concerned with gaining popularity and mobilizing the public for more solidarity with the national cause against Palestinians and for the occupation.

DESVARIEUX: And the issue of human shields, have you looked at the data? Have you seen that there’s an increase of abuses in the recent government, the Netanyahu government, compared to the governments of the past?

Actually, the Netanyahu government is a bit concerned about launching a massive invasion into Gaza like the previous government did in 2008 until the beginning of 2009. And in that attack, a group of soldiers actually forced Palestinian children at gunpoint to open doors for them or to check suspicious objects for them for fear that they might be bombed, so if it is a bomb, the child would explode rather than the soldiers.

And in one case there were two Israeli soldiers that were actually accused in an Israeli court of using that procedure, because according to the Israeli law this is illegal. These two soldiers have forced at gunpoint Palestinian children to open bags for them, so that if there’s a bomb in the bag, the child will be harmed rather than the soldier. And even though they were convicted, they only received suspended sentences. So they didn’t serve one day in jail for something that is a very serious offense. And, of course, that sends a message to the other soldiers: they can continue to do so. So that’s the real story about human shields.

I think since that attack on Gaza in 2008, 2009, there were fewer cases in which Israeli soldiers needed to resort to using Palestinian children as human shields, although, according to the UN report, there were cases nevertheless. But I think next time the Israeli army invades a Palestinian city and starts going door to door, the Israeli soldiers have already gotten the message that if they use Palestinian children as human shields, they’re probably not going to be punished by an Israeli court.

DESVARIEUX: Well, thank you for joining us, Shir.