Israel and the Palestinian Government Agree to Return to Negotiations

A unique combination of pressures pushed the two leaderships to agree to a resumption of negotiations, but the prospects of the talks remains grim

A unique combination of pressures pushed the two leaderships to agree to a resumption of negotiations, but the prospects of the talks remains grim 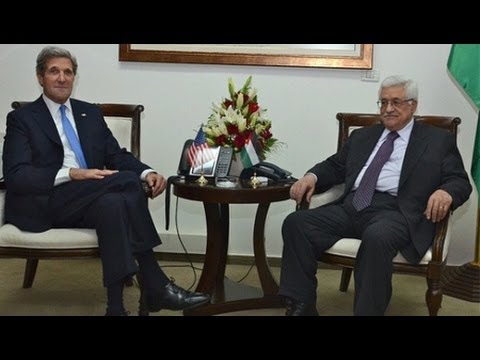 SHIR HEVER, TRNN PRODUCER: Secretary of State of the U.S. John Kerry has been working for several months on resuming the direct peace talks between Israel and the Palestinian government. His intensive efforts were testament to the importance which U.S. policy sees in influencing Middle East politics.

Despite Kerry’s intensive efforts, Palestinians and Israelis alike were skeptical that he could bring the two sides to the table, because the negotiations between the uneven sides have been going on since 1991 and have placed the Palestinian side at a considerable disadvantage. Twenty-two years later, Palestinians have become disillusioned with the prospect of direct negotiations and have come to see the negotiations as merely a ploy by Israel to buy time, while Israel proceeds with more land confiscation and the construction of colonies in the Occupied Territory.

JOHN KERRY, U.S. SECRETARY OF STATE: We have reached an agreement that establishes a basis for resuming direct final status negotiations between the Palestinians and the Israelis. This is a significant and welcome step forward.

HEVER: The Israeli occupation of the Palestinian territory in 1967 has made Israel one of the last countries in the world which rules a population of subjects in an occupied territory with a system of military law.

Negotiations have been going on for decades in order to end the Israeli occupation and to establish an independent Palestinian state. The negotiations have been promoted and sponsored by various countries and international bodies. But the control on the ground remained always in Israeli hands. Israel retained control over the borders, customs system, airspace, territorial water, and even the population registry.

This points to the main problem with these so-called negotiations–and I call them negations, not negotiations, ’cause they negate Palestinian rights, they negate human rights in general, and they negate the reference to international law. And therefore these talks have no chance of success. The Israeli side is a belligerent occupier and an apartheid system that’s denying a majority of the Palestinians, the refugees, the right to return to their homes. The Palestinian side is too weak and lacks democratic mandate, not to mention vision and other things. So there is no chance for these talks to succeed.

HEVER: In April 2012, President Mahmoud Abbas sent a letter to Israeli Prime Minister Netanyahu restating his demand that prior to negotiations, Israel must freeze the construction of the illegal colonies in the West Bank.

On the Israeli side, Netanyahu and the Israeli Ministry of Foreign Affairs made repeated claims that they are willing to enter into negotiations immediately, but not to freeze the illegal construction, not to accept the 1967 borders as a base for the negotiations, and not to release Palestinian political prisoners.

This of course led to an impasse. Without advancement in negotiations, indirect and low-level coordination continued between the Palestinian ministries and Israel, and life under the occupation did not become easier. The Palestinian government, in order to demonstrate its commitment to resisting the occupation, appealed to the UN to request recognition of its statehood, and was indeed recognized by the UN’s General Assembly. But so far the Palestinian government didn’t sign the Rome Convention to become part of the International Criminal Court in the Hague.

But the Palestinian government in Ramallah is in a difficult situation. The last elections have taken place in 2006. It has lost control over the Gaza Strip to the Hamas party, and it is caught between social protests in the streets of the West Bank cities and a lack of mandate on the one hand, and between immense pressure by the U.S to submit to Israeli demands on the other hand.

The Israeli government pursued a policy of ignoring the Palestinians, secure in its international support and intent on expanding the colonies in the West Bank. This has changed when the European Union dropped a bomb and published guidelines according to which E.U. funds should not be given to Israeli institutions operating in the Occupied Territory. Starting from January 2014, these guidelines could deal a serious blow to Israel’s banking system, to its universities, to its cultural institutions, and to its diplomatic standing.

Although several senior members of the Israeli government referred to the E.U. guidelines as “harmful for the peace process,” the reality shows that it is the exact opposite. Faced for the first time with serious international sanctions, the Israeli government changed its position and agreed to resume negotiations based on the outline set by John Kerry.

Kerry succeeded where his predecessors in the U.S Department of State have failed, because he had an unexpected help from the European Union, Israel’s largest trading partner.

A senior Palestinian official told The Wall Street Journal that Israel agreed to the three Palestinian demands prior beginning the negotiations–a freeze of construction in the colonies during the talks, using the 1967 borders as the basis for the negotiations, and a time limit on the negotiations. Amin Maqbul, a Fatah Party leader, said that the Palestinians are waiting for a public acknowledgement of these conditions from Kerry.

Negotiations are resuming because the gap in power between the sides has narrowed by a very small amount, but the gap remains wide. The Palestinian government still lacks a mandate to represent the Palestinian people, and especially the Palestinian refugees who are prevented from returning to their homes by Israel.

The Israeli government is in a state of panic, but so far remains trapped in its commitment to occupation, to national pride, and to obsession over security. It has not yet absorbed the significance of international sanctions and how they will affect everyday life in Israel, and therefore the chances that Israel will make any real concessions in the negotiations are slim at best. It is more likely that the Israeli government hopes to buy some more time, to discourage further sanctions, and maybe even to convince the European Union to repeal its decision.