Corruption in Palestinian Government is Connected to Occupation

Aman: the main reason for malpractices in the Palestinian government is the Israeli occupation, but reforms should be pursued nevertheless, as public demand for transparency and fair government is strong

Aman: the main reason for malpractices in the Palestinian government is the Israeli occupation, but reforms should be pursued nevertheless, as public demand for transparency and fair government is strong 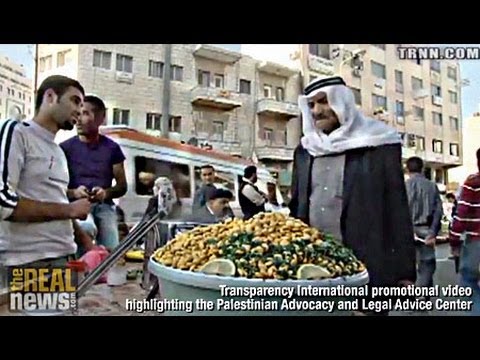 SHIR HEVER, TRNN PRODUCER: Since the founding of the Palestinian Authority in 1994, the issue of corruption in the Palestinian government became one of the hotly controversial issues debated among Palestinians.

A new report by AMAN, a transparency and good governance NGO in Palestine, shows that great progress has been achieved on the issue of corruption, but many aspects of Palestinian government are not handled with due procedure.

Yasser Arafat, upon signing the Oslo Agreements and the economic attachment to those agreements, the Paris Protocols, agreed to an economic system that restricted the ability of the Palestinian government to generate revenue.

Israel’s reason for doing so was to give Arafat the flexibility to use the Palestinian Authority’s hiring mechanism to buy support, to create a network of cronies answerable only to him, and therefore to keep a tight control over the Palestinian population, even in the face of great compromise in the negotiations with Israel, even as the illegal colonies continue to expand on Palestinian land.

Israel’s gamble was that Arafat would agree to further Israeli interests in order to fortify his own position of power over the occupied Palestinians. In the first years of the Oslo process, with a strong clampdown by the Palestinian Authority on the Hamas Party, that scenario seemed reasonable.

In 1997, the Palestinian Authority’s comptroller published a very critical report on lack of transparency in the Authority’s finances.

But Israel’s gamble didn’t pay off. The Palestinians refused to remain docile under military occupation and launched the Second Intifada in October 2000.

Israeli Foreign Affairs officials directed severe accusations at the Palestinian Authority, claiming that hundreds of millions of dollars are unaccounted for (and could have been used to fund terrorism), and not mentioning Israel’s own policy of delivering the money in non-accountable ways. The International Monetary Fund repeated Israel’s accusations uncritically.

The World Bank conducted a study which was published in 2001. The World Bank found that corruption levels in the Palestinian Authority’s public sector were comparable to levels in developed democracies.

Corruption, according to public opinion in the West Bank and Gaza Strip, was that senior members of the Palestinian Authority live a life of comfort and luxury, enjoying special access cards from Israel that allow them easy access through the checkpoints, while they do nothing to end the occupation and suffering of the general Palestinian population.

Salam Fayyad became the Palestinian minister of finance in 2002. He promised to reform the public sector and purge corruption. This message was popular with international actors. In 2007, Fayyad was appointed as prime minister, despite the fact that his party received less than 2 percent of the seats in the Palestinian Legislative Council.

NARRATOR: [[email protected]] was fired, along with others in the same position, when his political bosses were replaced. He then seemed blacklisted, unable to find work and unable to support his young family. This is a form of corruption that has to be confronted.

[[email protected]]’s case highlights the importance of ordinary people speaking out. And having received proper legal advice from [h{m3`] and her team, he was paid all the money that was due to him, and he’s now found work in a car showroom.

[[email protected]] is now determined that others should benefit as he has done. He wants more people to stand up for their rights.

(VOICEOVER TRANSL.): After we dealt with your complaint and we were successful, we’ve had a lot of similar complaints from people in the same situation.

HEVER: Fayyad’s resignation brings to the fore again the issue of corruption in the Palestinian government. AMAN’s report therefore comes at a crucial moment.

The report paints a complex picture of the state of corruption and transparency in the Palestinian public sector. Many achievements have been registered, such as the adoption of a code of conduct for public offices, improving procurement and tender procedures. The Ministry of Finance is more transparent regarding the budget, revenues, and tenders.

On the other hand, the report is critical of continuing problems, such as hiring procedures which exclude the general public, use of work-provided vehicles for personal purposes, and a crackdown against electronic news sites and Facebook pages of political opponents.

Without the ability to convene the Legislative Council, and without having held an election since 2006, an election whose results were rejected by Israel, the U.S., and the European Union, new problems arise regarding regulations of proper periodical financial disclosures by officials regarding term limits and general policymaking.

Despite the fact that the Israeli occupation is the main obstacle for a functional government in the Occupied Palestinian Territory, AMAN published eight pages of recommendations for reforms which the Palestinian government can attempt despite the occupation.

This demonstrates that AMAN, like the majority of the general Palestinian public, are committed not only to achieving sovereignty and self-determination, but also to ensuring a democracy and fair system of government when this sovereignty will be finally achieved.

March 6, 2020
Sign Up for Our Newsletter
Help Us Make Real News!