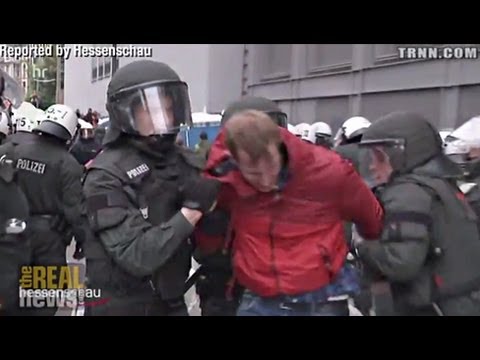 SHIR HEVER, TRNN PRODUCER: On June 1, about 20,000 people from all over Germany and nearby countries came to Frankfurt to participate in the Blockupy protest. The protest grew out of a camp in which activists from Austria, Belgium, Denmark, Greece, Italy, the Netherlands, and Spain joined with German activists.

The Blockupy Frankfurt protest was organized to protest the policy of the government and the banks regarding the European debt crisis.

The protesters planned to march on the European Central Bank (the ECB) and on the headquarters of Deutsche Bank and block those banks in order to protest their involvement in the European crisis, their influence over politicians, and their contribution to inequality and debt.

ANI DIESSELMANN, BLOCKUPY FRANKFURT: Our main goal is to show that the regime that is governing Europe through this crisis is neither democratically legitimate nor acting in any way responsible for the people. It’s really working for profit. One of its symbolic places is the ECB, a place that has economic and financial reign over Europe.

HEVER: Even though Germany and Germany’s chancellor, Angela Merkel, are associated with pushing for hard austerity measures in Europe and for threatening Greece and other indebted European countries with sanctions, the Blockupy Frankfurt protests show that the German people do not all share their government’s pro-capitalist position.

The protestors published a statement with the title “They want capitalism without democracy, we want democracy without capitalism.”

IBTIMES REPORTER (VOICEOVER): In the afternoon, the demonstrators would divide up, with some blocking the entrance to Deutsche Bank’s twin towers, to protest about food speculation and land grabbing. A second group would head to the city center to protest against rising rents, while around 200 will highlight racism and deportation at Frankfurt airport, Europe’s third-busiest hub.

HEVER: Although the protest was authorized by the authorities, and although German law protects the right of the people to demonstrate, the German police disregarded the law and brutally attacked the demonstration.

The police encircled about a thousand of the protestors in a “kettle”, preventing them from leaving and keeping them trapped for hours, hoping that the other protestors will tire and leave. The remaining protestors did not relent in their commitment to see the kettle removed and all the protestors released.

The police arrested about 45 people and injured between 200 and 300 of the demonstrators.

UNIDENTIFIED: We are standing here for nine hours. Look how the people are mistreated. We are extremely mad.

MARKUS FRANK, CDU, HEAD OF PUBLIC ORDER DEPARTMENT: The problem is, unfortunately, that the organizers didn’t succeed in distancing themselves from the violent offenders. They could just continue to demonstrate. The independents, those “black block”, could also keep going if they would drop the masquerade, if they would surrender their weapons and they were not ready to do this. Therefore one cannot talk about this as if it went according to plan.

HEVER: Chief of Police of Frankfurt Achim Thiel has been severely criticized for the police brutality. The city council of Frankfurt, and especially representatives from the Left Party, called him to answer questions on the actions of the police on June 1.

The Social Democratic Party, SPD, called for the resignation of Minister of the Interior of Hesse (the federal state of Frankfurt) Boris Rhein because of the encirclement of the protestors in a “kettle”. Boris Rhein is a member of the Christian Democratic Party, CDU, which is also the party of Chancellor Angela Merkel.

The Green Party also joined the SPD in condemning Boris Rhein and the actions of the police.

Another demonstration was held the following Saturday, on June 8, specifically against police brutality.