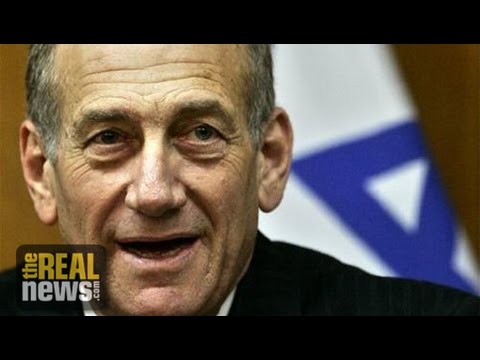 On Tuesday, former Israeli prime minister Ehud Olmert received a reduced sentence for bribery offenses. He’ll now have to spend 18 months in jail instead of six years. Now joining us to give us more context is Shir Hever. Shir is a researcher for the Alternative Information Center, and he joins us now from Germany. Thank you so much for being with us, Shir.

SHIR HEVER: Thanks, Jessica, for having me.

DESVARIEUX: So Shir, I know that the former prime minister, he was convicted a while ago, but folks probably aren’t up to speed on the story. Can you just give us some context as to what exactly he did, and why did he get his sentence reduced?

HEVER: Olmert was prime minister between 2006-2009, and he was–he’s going to be the first Israeli prime minister to go to jail for corruption, or for any other reason, actually. The reason that he was convicted in the end was for receiving a bribe, but actually there were a whole list of corruption cases and accusations against him. And in the end the court has decided to accept his appeal for most of these items, because they believe that the evidence is not strong enough, because they believe that it is possible that Olmert was not aware that his brother received money which was actually intended as bribe for him. And based on that doubt they decided to disqual–to take down most of the charges and leave him with one bribery charge for which he will go to jail.

I should say, when you are asking what actually he did, this whole corruption issue is actually very minor compared to the real crimes that Olmert is responsible for. When he was prime minister he launched two wars, one against Lebanon and one against the Gaza Strip. And in his attack against the Gaza Strip, known as the Cast Lead operation, which lasted between the end of 2008 until January 2009, almost 1,400 Palestinians were killed, most of them innocent civilians, which makes him a war criminal, one of the worst war criminals who are living today in this world. And for that no charges were pressed against him.

DESVARIEUX: Yeah. But what he actually did end up getting convicted for, as you mentioned, was the bribery charge. So can we talk about what the reaction was from the Israeli public after this scandal came out?

HEVER: I think the reaction is the most interesting part of this story, because this is something that did actually happen before in Israel, that a prime minister was accused of corruption. And this was a very minor issue, but when Yitzhak Rabin was prime minister in the ’70s, his wife had a registered bank account in the United States with $500 in it. And that was against the law in Israel. This is not a crime serious enough to merit incarceration. And it was not even Rabin himself, but his wife. Nevertheless, when this came out he immediately resigned from office.

And this just shows how much Israeli society has changed. Olmert, initially when the charges started, when the accusations started accumulating against him, refused to resign. Saw no reason to take responsibility for his actions. A lot of Israelis actually supported him. And I remember conversations with Israelis, who would tell me that Olmert is a wonderful prime minister, and they really support him. And I would ask, apart from his involvement in assault against Palestinians, the political issue is that maybe most Israelis certainly don’t agree with me. But what about his criminal record? What about his corruption? And they answered, well, it’s actually a sign that he can make money. He knows how to make a buck. That’s a good sign.

And I think that’s a new kind of brand of politician that Israel now has many of. And there is now a trend in Israel of corrupt politicians being let off the hook one by one. And this court decision is part of that trend. Olmert is actually going to receive a very, very light sentence compared to what somebody would have received for similar charges if they were not a former prime minister.

DESVARIEUX: Yeah, and Shir, can we talk a little bit about the process here? How is it that–do you find that it’s very easy for politicians in Israel to break the law?

And that is something that I think in itself shows the political culture in Israel, that it’s become much more open about corruption and much–I mean, much more corrupt and much more shameless about corruption. And that’s–and the current attorney general, Yehuda Weinstein, is scheduled to end his term in January, 2016, in the next few days. And his replacement is now being chosen. And the minister of justice, who has the authority to replace him, is probably the most extreme right hawk in the Israeli government, Ayelet Shaked, who has been known to make fascist statements and extremely racist statements in her role as politician.

She’s also, she also has a reputation of being extremely strict. So a lot of people expect her actually to appoint a very strict attorney general who will maybe reverse this trend and make it easier for other politicians, make it harder for politicians to get away with crime. But it now seems more and more likely, according to her own political statements, that she’s going to do her best to make sure her colleagues in government are able to do whatever they want, and basically to appoint somebody who would allow them to accumulate as much power as they can.

DESVARIEUX: All right. Shir Hever, always a pleasure having you on. Thank you so much for joining us.

HEVER: Thanks for having me.