Why is Israel Undermining the Palestinian Authority?

Sher Hever: After shoring up the PA, Netanyahu now trying to push back further right parties in Israeli elections

Sher Hever: After shoring up the PA, Netanyahu now trying to push back further right parties in Israeli elections 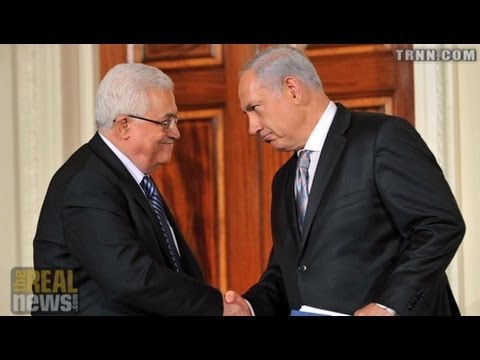 PAUL JAY, SENIOR EDITOR, TRNN: Welcome to The Real News Network, and welcome to this week’s edition of The Hever Report with Shir Hever. Shir now joins us from Germany, where he’s doing his PhD work. Shir is studying the Israeli occupation of the Palestinian territories for the Alternative Information Center, a joint Palestinian-Israeli organization which publishes alternative information and analysis. Thanks for joining us, Shir.

HEVER: Israel announced that it will freeze approximately $100 million that it owes to the Palestinian Authority this week as sort of a punishment for the Palestinian appeal to the United Nations for recognition of statehood. And in order to understand what exactly happened, we have to look a little bit further back at the economic side of the Oslo agreements, known as the Paris accords.

In Paris, Israel and the Palestinian negotiating team signed in 1994 a treaty that Israel will be allowed to collect taxes on behalf of the Palestinians. That means income tax, value added tax (VAT), and most importantly customs. And Israel collects all these taxes at their own border or by their own mechanisms, and then they are supposed to transfer this money to the Palestinian Authority every month.

But Israel has, over the years, broken the Paris accords and disregarded those parts which they didn’t like. For example, the Paris accords say Palestinian workers should be able to enter Israel freely to seek work, and in fact this is not the case. Israel restricts Palestinians from entering Israel and working and gives only a very limited amount of permits.

JAY: Well, Israel claims that the Palestinian Authority owesâ€”I think it’s their power utility or something money, and they’re going to use it to pay down that bill.

HEVER: From 1994 and until today, a lot of different services that the Palestinian Authority is not capable of providing to their own population, mainly because of the occupation, are provided by Israeli companies. But they’re not provided as charity. The Palestinians have to pay for them a very high price. And I’m talking mainly about water services and sanitation services, electricity, and health care, because Palestinian hospitals have been neglected over the past 45 years of occupation. Israel made no investment in new machinery and so on. So Palestinians who need life-saving treatment have to go to Israeli hospitals, and the bill is sent to the Palestinian Authority.

But rather than waiting for the Palestinian Authority to pay the bill, as you would normally expect, the government of Israel simply decides to cut from whatever amount of money they owe to the Palestinians whatever debt is announced by the Israeli companies. So in this case the Israeli electricity company, which is actually owned by the government and therefore would say whatever number the government would tell them to say, have given this number of about $100 million, which is convenient for the Israeli government right now to use, to hold the $100 million right before the elections in Israel. And that’s what they do unilaterally without any kind of mediation process, without any kind of court.

JAY: Yeah. So why aren’t they worried about that now, especially at a time when Hamas seems to be sort of on the rise and back in popularity?

But the decision is not taking place there. The decision is a political decision taking place at the government. And the main thing on the mind of Prime Minister Netanyahuâ€”Foreign Minister Lieberman has just resigned, but he is the one who actually took credit for the decision to stop the funding to the Palestinian Authorityâ€”their main concern is the upcoming election.

JAY: What are they concerned about? They’re so far ahead in the polls. I don’t understand what they’re worried about.

HEVER: There can always be a surprise, of course. And what you see, mainly over the last couple of weeks, is that Netanyahu/Lieberman’s joint party is losing a lot of votes not to the left but to the right. There are some emergent extreme-right ultra-religious parties who argue that Netanyahu is too soft on the Palestinians, and they’re saying that Netanyahu should take a harsher hand with them. And, of course, Netanyahu, even if he’s still going to be the prime ministerâ€”and that’s almost certainâ€”he knows that the more power he loses to these extreme-right parties, the fewer of his own friends in his party will be able to get into the parliament and he will have a weaker hold over his coalition.

JAY: Right. Shir, what is the Israeli attitude to whatâ€”thisâ€”sort of what I’ve been calling a shotgun marriage of sorts between Hamas and Fatah that’s beenâ€”seems to be engineered by Qatar? The Hamas moved its headquarters from Damascus to Doha. The emir of Qatar went to Gaza not very long ago, just a few weeks before the last war or attack on Gaza. They apparently are going to put a lot of money into Gaza and the West Bank. What is the Israeli notion towards all of this?

HEVER: I wouldn’t say it was engineered by Qatar, I would say it was facilitated by Qatar, because the main group that has a strong interest for reconciliation between Fatah and Hamas are the Palestinian people. And many grassroots organization and political parties have been calling for reconciliation between Fatah and Hamas ever since 2006. But Israel has used every means at their disposal (and this also answers your question about their reaction) to try to prevent it.

From the point of view of Israel, the policy of divide and conquer has been the tried and tested policy they’ve been using againstâ€”in any area that Israel has occupied over the years and against any population that they are using their army, always trying to find some internal discord to encourage. And in this case we have to remember Israel actually helped Hamas in the early years to gain power and popularity in the ’80s because they wanted Hamas to be in a position to the Fatah Party.

Now, when the roles are reversed, Hamas are the enemy, Fatah are the so-called friends, to a limited extent, of the Israeli government, they still want to keep both sides fighting each other as much as possible. And, of course, if Hamas and Fatah join forces and make a clear appeal to the international community to uphold international law, an appeal to the Palestinian public to resist occupation in a joint effort, this is something that threatens the Israeli government very much. They don’t know whether they will be able to quell another Palestinian uprising.

JAY: A journalist in Gaza and other people we’ve been talking about have kind of positioned this a little differently, in the sense they see the Qatari influence as kind of bringing Hamas into the foldâ€”and we know Qatar is a very close ally of the United Statesâ€”CENTCOM is in Qatarâ€”and Qatar has not bad relations with Israelâ€”that this kind of developing unity is part of a sort of a plan for Qatar and the Muslim Brotherhood in Egypt to kind of start to manage the situation more directly, but within this kind of sphere, U.S. sphere.

JAY: And that’s a big deal, because if I understand it correctly, the Palestinian employer is the biggest employer in the West Bank.

But also he’s now just made a statement this week which seems to undermine the Paris Protocol, because the Paris Protocol, which I talked about before, the agreement between Israel and the Palestinian Authority, talks about no side doing anything to harm the other side’s economy. Most Palestinians, most Palestinian people strongly support the economic boycott against Israel, the BDS movement. But the Palestinian Authority, headed by Salam Fayyad and Mahmoud Abbas, refrain from making that call, because they felt this would be in violation of the Paris accords. They cannot harm the Israeli economy, so they cannot call for boycott. Instead, they chose to focus on a boycott of the illegal settlements in the West Bank, the illegal colonies.

But because Israel has once again violated the agreements on their side and froze the money that is due to the Palestinian Authority, Salam Fayyad made a statement that he’s now supporting a comprehensive boycott of Israeli products, and that’s no little thing. Of course, the Palestinians are not such a big market compared to the international market for Israeli products, and they don’t have that much purchasing power, but if there will be moves toward a comprehensive boycott, Israel has already threatened in the past that they might simply break the Paris accords completely or disregard them and just separate Gaza from the West Bank entirely. And that has always been a risk. When we see Hamas and Fatah coming a bit closer together with reconciliation efforts, then it increases the risk that Israel will cut off Gaza from the West Bank.

JAY: Alright. Thanks for joining us, Shir.