France Asks Palestinians to Give Up Right of Return 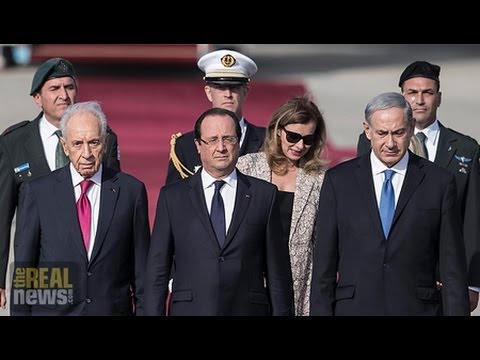 Now joining us to discuss the significance of this visit is Shir Hever. He’s an economic researcher at the Alternative Information Center, and he’s a regular contributor to The Real News.

Thanks for being with us, Shir.

SHIR HEVER, ECONOMIST, ALTERNATIVE INFORMATION CENTER: Thanks, Jessica, for having me.

DESVARIEUX: So, Shir, can you just deconstruct for us what’s the significance of Hollande visiting Israel and Ramallah this week?

HEVER: I think his visit is part of a very interesting change in the French overall foreign policy, and it’s something that we should pay attention at because it’s not just France. France is taking a very dangerous kind of political direction, which I believe began already with the previous president, with Sarkozy, and has been manifested with the French very belligerent approach towards Libya. France was one of the first to call for a military action in Libya. In the French military action in Mali, French actually started a war in Africa. And recently, in the Geneva talks regarding the sanctions against Iran and the attempt to get Iran to give up its nuclear program, France has taken the most extreme position and has sabotaged the talks, prevented a deal from being reached. They’ve actually done this already twice over the course of these talks.

And now Hollande has visited Israel and Palestine. And I believe that this visit is a very symbolic attachment to this continual change of policy, because what we see is France, a very well established country, very old country, which actually has achieved peace and is part of the European Union and has no serious enemies. And it seems that the country’s very eager to create new enemies and to instigate conflict and war. And, of course, these things don’t just happen because of some bad temper or some whim of President Hollande, but it is because of economic interests, of military contracts, and also the prestige that France can gain by appearing to be such a strong state.

The problem is, of course, a problem of legitimacy. This is no longer the 19th century, and empires don’t just start wars whenever they want and send their army to attack other countries. And, of course, the French people themselves, who’ve elected Hollande as a candidate who was supposed to be on the relative left side of the political map and rejected his extreme-right opponents, they are now finding him making these deals with right-wing governments or promoting right-wing policies.

And what Hollande did in his visit to Israel-Palestine is to align himself with the country, with the state that symbolizes those kinds of right-wing policies as if they were part of the legitimate way to do politics in this world. And that is Israel. And Israel is a country that does certainly send its army to constantly attacking its neighbors.

And what Hollande did in his visit, he made a sort of token call on Israel to halt settlement construction, to halt the construction of the illegal colonies in the West Bank. This is something that may seem as if he’s criticizing Israel, but in fact it is exactly the kind of talk that Israel is very happy to hear, because it shifts the discourse from talking about the actual illegal colonies which are already there–600,000 colonists living on Palestinian land in contravention of international law. And instead of talking about evacuating these colonies, he’s saying Israel should stop constructing more. So that is actually something that was very well accepted in Israel. They of course don’t have any plans of stopping the construction, but they’re very happy that this is now the discourse.

And this suggestion to the Palestinian government is something that I think reveals a great deal about the mindset and about the kind of politics that France is now adopting. This is colonial logic par excellence. And it brings us back to 1947, when the United Nations, and especially the European countries, have promoted the Partition Plan of Palestine, awarding half of Palestine to the Zionist movement in order for–to establish a Jewish state. And they did this because they thought there should be some kind of solution for Jewish refugees after the Holocaust. And rather than rehabilitating these refugees in their home countries back in Europe, mostly in Europe, they’ve instead chosen to do that at the expense of somebody else and to have the Palestinians give up half of their land to the Zionist movement.

What Hollande is saying now is that the Palestinian government should just give up on the rights of about four, four and a half million Palestinian refugees who live around the world who have the right of return to their homes granted to them by the international community, by international law, in exchange for some minor gesture by the Israeli government.

Of course, President Mahmoud Abbas doesn’t did not agree to the suggestion. Nor does he have the authority to make any decision on behalf of the Palestinian refugees. He was not elected by them.

And I think French citizens most of all should be asking their president, if he’s willing to negotiate basic rights of people away and to suggest that Palestinian refugees should forfeit their rights under international law as part of the negotiation leading nowhere between the Israeli government and the Palestinian government, who’s next. What other minorities in the world, what other groups who are currently not politically strong could be just swept aside in the name of political expediency?

DESVARIEUX: Alright. Shir Hever, thank you so much for joining us.