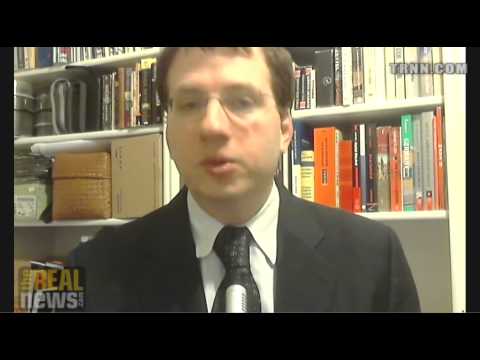 Over the past week, several high-ranking Israeli officials have made public statements about the importance of integrating Palestinian citizens of Israel into the Israeli workforce. These statements were made by the newly appointed chairwoman of the central bank of Israel, the minister of the economy, the minister of finance, and Prime Minister Benjamin Netanyahu. According to our next guest, these statements ring hollow and are not backed by any of Israel’s government policies.

We’re now joined by Shir Hever. He’s an economic researcher in the Alternative Information Center, a Palestinian-Israeli organization active in Jerusalem and Beit Sahour. He’s also the author of The Political Economy of Israel’s Occupation: Repression Beyond Exploitation.

Thank you so much for joining us, Shir.

SHIR HEVER, ECONOMIST, ALTERNATIVE INFORMATION CENTER: Thank you, Jaisal, for having me.

NOOR: So, Shir, can you talk about these statements made by Israel about integrating Palestinian Israelis into the Israeli workforce and whether they’re actually backed by real policies on the ground?

HEVER: These statements were made in the context of the annual Prime Minister’s Conference on Economic Issues. And this year, they’ve decided to dedicate this conference to Palestinian citizens of Israel, only they don’t call them Palestinian citizens of Israel–they call them Israeli Arabs. The name Israeli Arabs is somewhat problematic, because it denies those Arabs who live in Israel and who are not Jewish their right to identify with their nationality and the land in which they live, which is Palestine. And this conference was dedicated to the issue of how these people, these Arab citizens of Israel or Palestinian citizens of Israel, are integrated into the economy. And it was quite surprising to hear those extreme right-wing leaders–we’re talking about Naftali Bennett, the leader of the most extreme [inaud.] party currently in the coalition–speaking about how important it is to integrate those people, those citizens into the Israeli economy.

And the statements are interesting, first of all, that the government actually recognizes the fact that there is very deep inequalities and that Palestinians are segregated within the Israeli economy. They wouldn’t use those terms, of course, but they–and Bennett actually referred to these inequalities as something that once had occurred in the past but is no longer the case.

Well, let’s see whether the government has actually made any kind of efforts in order to incorporate Palestinians into the Israeli economy. What we see is that less than 5 percent of government investment in construction for industry in Israel has been directed to communities in which Palestinian citizens are the majority. And there is discrimination in every sector and every aspect of the Israeli economy. The average income of the Palestinian citizens is only 67 percent of the national average and about half as much as Jewish citizens make, again, on average. Fifty-three-point-five percent of all Palestinian families live under the poverty line. And what we can actually see regarding poverty is that the rate of poverty among Palestinians has increased over the last ten years by 12 percent. So the direction that we’re seeing is a direction in which Palestinian citizens are increasingly segregated from the economy. Palestinians are also segregated from a higher learning in Israel and are only 5 percent of all university students, even though they are more than 20 percent of the population. So that’s something that speaks to a very systematic, institutionalized segregation.

And the statements that we hear from these politicians talk about how important it would be to incorporate the Palestinians, but they’re more directed at an international audience. This is because in the last years, Israel has been increasingly portrayed as an apartheid state. And one of the ways that the government is trying to deny these accusations is by saying, well, there’s a peace process, there might be a Palestinian state. But people all around the world are becoming aware that the apartheid regime that Israel is implementing is not restricted to the occupied territory of the West Bank and the Gaza Strip, but there is actually apartheid inside the internationally recognized borders of Israel, meaning inside Israel proper, and in these areas there is also very deep segregation and very deep discrimination against non-Jewish citizens, which has been going on for the past 65 years.

NOOR: Now, why is Israel so worried about this apartheid label?

HEVER: The apartheid label is something that feeds into the global boycott movement against Israel. And it’s not only something that convinces a lot of internationals, a lot of people around the world to understand that Israel has a very problematic regime based on racial segregation and ethnic separation of people based on, well, mostly their ethnicity, although officially it’s based on their religion. And because people are aware of that, there’s increasing criticism of Israel. And we’ve seen in the last years that even some governments have started to put a little bit more pressure on Israel. Currently the European Union is considering implementing more policies which would sanction Israel for abusing international–for violating international law.

And the strategies that have been implemented by the Israeli Ministry of Foreign Affairs over the years in order to repel this kind of criticism has been to try to push all of the blame for whatever problems there may be not on the story that started 65 years ago with the Palestinian Nakba, with the ethnic cleansing of Palestine, but with the occupation that started 46 years ago, the occupation of the West Bank and Gaza, saying, well, this occupation is temporary, this occupation will probably end soon because there is a peace process and because there is a Palestinian Authority that will sign some kind of document that will say there’ll be an end to the conflict. And this has successfully pushed international governments, the United Nations, to focus on this occupation of 1967 and to forget, unfortunately, what happened in 1948 to a large extent.

What we now experience in the global movement to criticize Israel, to fight for Palestinian freedom, is a growing awareness of the Nakba, of what happened in 1948, and an increasing use of the term apartheid referring to Israel.

In the Israeli media, there are more and more frequent calls or more and more frequent mention of the word apartheid as sort of a warning signal, as a red light, that Israel is approaching the situation of South Africa, which also had an apartheid regime for many years. And when Israelis hear the comparison with South Africa, with Israel and South Africa, their reaction to this is not, oh no, this is terribly immoral and terribly unjust to treat people differently just because of their ethnicity, but their response is, oh no, this means that just like the South African apartheid regime has been subjected to international sanctions and has eventually collapsed and they had no choice but to start a democratic system in South Africa in which everybody has a right to take part and to have their vote, what will happen in Israel-Palestine? And that, of course, would spell the end of the Zionist state, of the Jewish state, and would replace it with a democratic state.