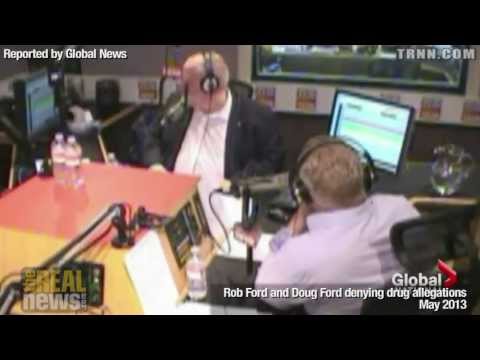 ROB FORD, MAYOR OF TORONTO: Please, can you get off my driveway?

PAPARAZZO: I’m getting off your property.

FORD: Can you get off my property, please?

FORD: Get off my property!

FORD: Take it off my property!

SHAGHAYEGH TAJVIDI, TRNN PRODUCER: This is the mayor of Toronto Rob Ford’s latest altercation with the press. It follows statements by Toronto Police that earlier allegations by the media of a video capturing the mayor smoking crack cocaine are true. On Thursday, October 31, Chief of Police Bill Blair confirmed:

BILL BLAIR, CHIEF, TORONTO POLICE SERVICE: I have been advised that we are now in possession of a recovered digital video file relevant to the investigations that have been conducted. That file contains video images which appear to be those images which were previously reported in the press.

TAJVIDI: The story broke nearly six months ago, following exclusive reports by the American website Gawker and The Toronto Star attesting to the existence of a video in which the mayor is also heard making racist and homophobic comments.

ROBYN DOOLITTLE, TORONTO STAR REPORTER: The man in the video, who we believe is Mayor Rob Ford, appears stumbling. He seems incoherent. He rambles. At one point he appears to call Liberal leader Justin Trudeau a fag.

TAJVIDI: More and more details began to surface relating to the Ford drug saga, such as the emergence of this photo, which shows the mayor with 21-year-old Anthony Smith to the left and a friend of his. Anthony was shot and killed in March of this year, prior to news of the video first making headlines. His death has triggered questions about connections to that video and whether it was filmed on Anthony’s cell phone.

From the beginning, the mayor and his brother Doug Ford consistently denied the existence of the video, and Ford supporters attributed the reports to smear campaigns by the so-called left wing media. And though the stories caused uproar, the credibility of the Toronto Star reporters was called into question.

With the recovery of the digital file, police maintain that it is now up to courts to determine whether criminality can be proven with the video, and that as of yet, many questions remain unanswered.

But despite the pending legal outcome of the case, another development this week further impacted public opinion on the mayor’s suitability to govern.

A man known as Alexander or Sandro Lisi, who Ford has described as a friend and his occasional driver, was charged with extortion in connection with the controversial video. Lisi has since been released on a $5,000 bail but has been closely implicated in the scandal from the beginning. He is also suspected of, though not charged with, supplying marijuana to the mayor. A 500-page police report detailing Lisi’s interactions and relationship with Mayor Ford have been documented and provided to the courts. As of yet, Ford has remained silent on the document release.

After months of related headlines, culminating in these recent “bombshells”, as the dominant media puts it, all major news outlets in Toronto have called for Ford’s resignation.

FORD: No, no, no, no. You know what? No. No. I have no reason to resign. I’m going to go back, return my phone calls. I’m going to be out doing what the people elected me to do, and that’s save taxpayers money and run the great government that we’ve been running for the last three years.

TAJVIDI: And according to lawyers, if he was convicted of a crime, even that would not prompt his removal from office.

JOHN MASCARIN, MUNICIPAL LAWYER: And he said, I don’t have to resign. He’s absolutely technically right. The mayor cannot be removed under these circumstances. Remember, there’s no charges pending against him, at least none that we’ve been told about. So even if there’s a conviction–and I think this is what a lot of people get surprised by–he won’t be removed from office. You have to actually be imprisoned in order to be removed from office.

TAJVIDI: In light of all that has transpired, Ford’s business-as-usual response about returning to what the taxpayers elected him to do now raises more eyebrows and frustration across the political spectrum. But the overarching issues go much deeper than the ins and outs of a complicated and high-profile drug scandal, underneath which are important implications for race, class, political accountability and democracy in the city of Toronto.

At the time of publishing, the story continues to develop rapidly, and Real News will continue to follow it.

Reporting from Toronto, this is Shaghayegh Tajvidi.