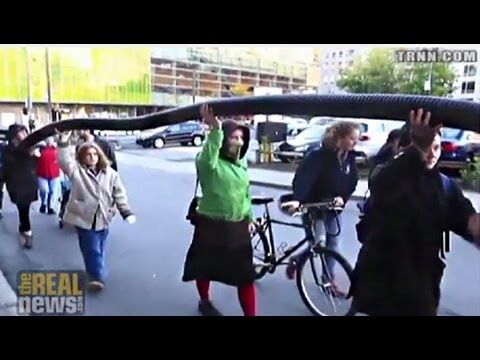 SHAGHAYEGH TAJVIDI, TRNN PRODUCER: Singer-songwriter and activist Sarah Harmer is worried about the tar sands and the pipelines that transport the heavy crude, concerned enough, in fact, to have organized a free concert called “Rock the Line” in the north of Toronto to raise awareness about Enbridge’s controversial pipeline reversal project, Line 9B. The Harmer family farm sits along the proposed tar sands route.

SARAH HARMER, SINGER-SONGWRITER: What Enbridge is asking to do is to reverse the flow of it [Line 9], so to now change it from pumping from Montreal to Sarnia – they want to pump it from Sarnia to Montreal, and also increase the capacity, increase the volume, and increase the pressure of the pipe and pump through diluted bitumen, which is a different substance. People liken it to peanut butter cut with carcinogenic chemicals so that it will actually move through the pipeline.

So that raises, obviously, huge concerns when this covers so much ground through watersheds in Ontario and Quebec. So many people’s drinking water is Lake Ontario. All the inlet–intake areas in the lake are completely vulnerable. I’m really concerned with air quality and hydrocarbons being blasted into the air upon rupture. So it’s not just the watershed and the land with the bitumen; it’s also the chemical release as well.

TAJVIDI: Sarah’s performance came a couple of days prior to the National Energy Board hearings in Montreal, Quebec, which began on October 8 and concluded on the 11th. Over the course of four days, participants, including oil and gas businesses and lobbyists, community groups, and environmental organizations, made cases for and against Enbridge’s plans to reverse the nearly four-decade-old pipeline.

DIMITRI TSINGAKIS, INDUSTRIAL ASSOC. OF EAST-END MONTREAL: Obviously, it’ll help the companies be more efficient and have more economic benefits. Line 9 reversal is just going to help us to maintain whatever companies are left and help them be competitive within the North American and world markets.

TAJVIDI: Other participants, such as Chief Clinton Phillips of the Mohawk Council of Kahnawa’ke and MCK legal counsel, challenged Enbridge’s plans, particularly around safety issues and the lack of consultation with indigenous communities living in close proximity to Line 9. There are approximately 18 indigenous nations along the pipeline’s route.

CLINTON PHILLIPS, MOHAWK COUNCIL CHIEF, KAHNAWA’KE: Well, you know, we took the stance that there was a lot of unanswered questions and questions that are important to us that we don’t want to leave to chance or, in some cases, after the fact, answers. You know, there’s a whole lot of things about the environmental issues. There’s stuff about our rights as First Nations people and that there’s a duty to consult with us. And although Enbridge did meet with us on two separate occasions, I believe, in our eyes that does not constitute consultation.

FRANCIS WALSH, MCK LEGAL COUNSEL: At the NEB hearing yesterday, the counsel took the position that due to the numerous outstanding safety and security concerns with the pipeline and due to the fact that Enbridge did not address the concerns raised by MCK, that we were opposed to the NEB granting the application, and that we stressed that numerous safety and security concerns needed to be addressed prior to the project being authorized, in addition to the Mohawks of Kahnawa’ke needing to be properly consulted and adequately having their concerns addressed before the project can move forward.

TAJVIDI: The National Energy Board is hearing arguments in both Quebec and Ontario, the provinces through which the pipeline runs and would be directly impacted in the event of a rupture. From day one of the Montreal hearings, protesters gathered outside of the building to express opposition to Enbridge’s reversal plan.

MELISSA DUPUIS, MONTREAL ACTIVIST: So we are trying to warn people that this project is one of the worst idea that could happen to Quebec. And once the water is polluted, it’s not going to be able to be undone. We saw what happened with spills with Lac-Mégantic. And the difference between a train and a pipeline is that a train, once it’s burned, it’s burned, but pipelines can burst and burn, and that until they find the leak, they can’t stop it. And we have seen leaks go on for months before they can find it.

TAJVIDI: The following day, protesters entered the building and disrupted a speech by the Association Industrielle de l’Est de Montréal, which was speaking in favor of business interests. Protesters spoke in French and English about Enbridge’s extensive history of spills and called into question the NEB process itself.

PROTESTER (SUBTITLED TRANSL.): More than 20 people were removed by the National Energy Board (NEB) for rightfully protesting the NEB’s anti-democratic nature. NEB hearings no longer permit citizens, especially those who are solidly organized, to participate (in the process). The modifications to the NEB process come with the federal government’s implementation of Bill C-38. The only objective was clearly to accelerate tar sands projects and all other energy projects, because the objective is to double the production of tar sands oil by 2020.

We are talking about a global climate crisis. We must reject all projects that will contribute to worsening this crisis. Canada has plans to increase tar sands production, and this means much more greenhouse gases, and that the oil will pass through pipelines. And I say to [Quebec investors], put your money in renewable energy, not in dangerous energy!

TAJVIDI: On Thursday, police cracked down on demonstrators, declaring their rally illegal, arresting three people, detaining 29 others, and fining them $700 for participation in the “unlawful” action.

Anger around the restrictive processes and the pipeline plan itself has been mounting in recent months and is expected to provoke protests across Ontario.

HARMER: Here we are in beautiful Ontario, with incredible natural places, incredible communities, incredible culture. And we are also standing up and saying the same thing, that we do not want to take part and support this kind of proposal. It’s the wrong direction. And we’re saying it en masse. And we can’t deal with climate change if we lock ourselves into this antiquated mode of shipping raw bitumen out of the tar sands. We can continue to say that, and we’ll continue to get louder and stronger and more collective.

TAJVIDI: The NEB hearings will continue in Toronto beginning on October 16, with a large rally planned on the final day, October 19 at noon at the Metro Convention Centre, where the hearings will be held.

For The Real News Network, Shaghayegh Tajvidi and Lana Goldberg in Toronto.