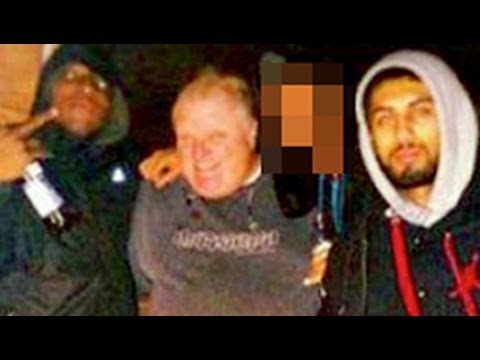 SHAGHAYEGH TAJVIDI, TRNN PRODUCER: It is official. On Friday, November 15, Toronto councilors passed two motions that as of Monday leave Mayor Rob Ford as a mayor in name only. Councilors first passed a motion by a vote of 39 to three that removes his power to appoint committee members and the deputy mayor. Councilors then went on to remove his authority to manage under emergency circumstances, a move that was supported by all councilors in attendance except for the mayor and his brother, Councilor Doug Ford.

ADAM VAUGHAN, TORONTO COUNCILLOR: He has so clearly violated the trust that the city put in him, he and his brother. And it’s time just to move on. They have to be isolated. They can’t be allowed to govern this city. They shouldn’t be allowed to hold office, in my opinion.

TAJVIDI: This was the culmination of yet another week of scandal in the city of Toronto, featuring the most attention-grabbing quote by the mayor since the crack cocaine admission. On Thursday, Ford made sexually explicit comments about a former female staffer, as well as his wife, all in denying new allegations against him, which included accusations of a sex worker inside his City Hall office and sexually harassing the female staffer in question.

ROB FORD, MAYOR OF TORONTO: Olivia Gondek–it says that I wanted to eat her pussy, Olivia Gondek. I’ve never said that in my life to her. I would never do that. I’m happily married. I’ve got more than enough to eat at home. Thank you very much.

TAJVIDI: Just a couple of hours later, he had called a press conference to apologize, this time for his, quote, unforgivable choice of words.

TAJVIDI: So what prompted the outburst to begin with? On Wednesday, more court documents were made available on the order of an Ontario judge relating to the investigation of Ford’s friend and driver, Sandro Lisi, who now faces drug and extortion charges. The newly released information reveals hundreds of pages of interviews with the mayor’s past employees, who made claims about him driving while under the influence of alcohol, making racist remarks, abusing cocaine and the powerful drug OxyContin, smoking marijuana openly in front of staff, and the infamous sex worker rumors that the following day caused Ford to, quote, “see red.”

TAJVIDI: These latest allegations have not yet been proven, though the mayor has since confirmed that he has driven after drinking. When pressed on these serious matters, the mayor has dismissively stated that he is, quote, getting support. But it has been a pattern with both Ford brothers to return the question about drugs or alcohol to whoever asks it to them in the first place. Their defense: the mayor is not perfect.

DOUG FORD, TORONTO COUNCILOR: None of you have ever done anything wrong, have you, ever? Never. Never. The question is: have you ever smoked marijuana?

TAJVIDI: The release of the court documents are only amplified by other developments this past Wednesday, which began with the councilors voting for the mayor to take a leave of absence. That day inside the city chambers went something like this.

GIORGIO MAMMOLITI, TORONTO COUNCILOR: Mr. Mayor, do you think you have an addiction problem with alcohol?

MAMMOLITI: Mr. Mayor, do you think you have an addiction problem with substance abuse in illicit drugs?

TAJVIDI: And while all of this has taken a massive jab at his moral authority to lead, Ford turned the conversation, as always, to the issue of saving taxpayers money.

R. FORD: I have saved more taxpayers’ money than any mayor in Toronto’s history. I was elected to come down here and clean up the mess. And I know I have done that.

TAJVIDI: Given the mayor’s consistent reference to his proud fiscal record, detailed reports from Metro News and The Toronto Star, among other sources, have placed Ford’s claims under scrutiny.

R. FORD: Every year for the past ten years, City Hall has raised your taxes.

TAJVIDI: One of the mayor’s favorite catchphrases states that he saved taxpayers, quote, over $1 billion. The Star argues that that figure is contingent on “creative definitions of ‘savings’ and ‘taxpayers,'” and on “exaggerations and omissions”. And in direct contrast to saving taxpayers money, take for instance the city’s $9.2 billion operating budget the year Rob Ford took office compared with this year’s budget of $9.4 billion. Far from showing a record of restraint, the difference illustrates a $200 million increase in spending.

TAJVIDI: Just outside City Hall, a crowd of well over 1,000 angry Torontonians had joined in the Save Toronto rally to demand the mayor’s resignation.

UNIDENTIFIED, SAVE TORONTO RALLY: The people who go to jail who frequently are people of color using drugs demonstrates his inability to listen to the communities around him and his inability to actually support the people in this city.

UNIDENTIFIED, SAVE TORONTO RALLY: It’s time for him to seek the help that he needs, but he can do it on his own God damn time.

LIISA SCHOFIELD, ONTARIO COALITION AGAINST POVERTY: And people are just done. They are done with this mayor.

I hope that it is a move away from conservative government, absolutely. But I would caution people, in that I don’t see necessarily other governments coming in after Ford and after Harper necessarily taking an anti-austerity agenda.

SUE GOLDSTEIN, PROTESTER: We don’t want to replace Ford with another Ford.

There is a connection between Harper and the Conservatives at the federal level, and what we call the Liberal’s at the provincial level but have been more conservative than liberal, and the conservatives that have been running City Hall for the past few years. Where’s the affordable housing? Where is a city that we can live in?

DEWITT LEE, FORMER MAYORAL CANDIDATE: I think the people need to just–when they get an opportunity to vote the next person as mayor or any level of representation, that they take time to really do their homework. If you go get a job today, they’re going to run your credit check, they’re going to talk to six references, and they’re going to make you do push-ups. So, you know, we need to take the same sort of level of scrutiny when we hire our city officials.

TAJVIDI: Perhaps the emergence of these protesters, who showed up after a field trip to City Hall and are still years from having a say in elections, hints at the Ford scandal fatigue that Toronto is currently experiencing, though with so many lingering questions, continued distractions, and a mayor who stands firm about seeking reelection in 2014, this may well be the first part of a much longer tale.