Millions of people, including children, toil in bonded labor in India, even though the practice has been outlawed for years

Millions of people, including children, toil in bonded labor in India, even though the practice has been outlawed for years 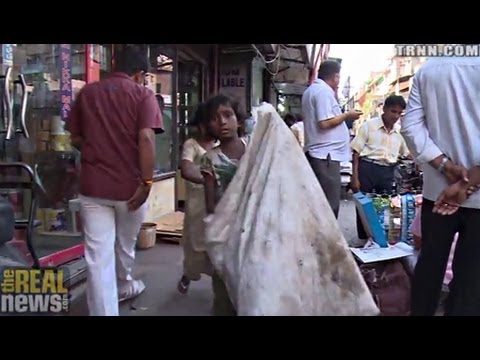 SHAHANA BUTT, NEW DELHI, INDIA: To promote the country for widespread tourist attraction across globe, India advertises itself as “Incredible India”. But how true this jingle is a big question for those who are living here.

While the government claims it has succeeded in eradicating the problem, almost each day, thousands of people, including children, in India are trapped, and very few are rescued from the ages-old trap of forced labor in the country.

India, a secular democracy that promises its citizens equal rights, has failed big time. While slavery has been abolished across the globe, here it exists in different forms, like bonded labor and child labor.

To know more on this, The Real News Network talked to Swami Agnivesh.

Way back in 1980s, for the first time in India, a politician started a campaign against rampant bonded labor system in the country, and till date his struggle continues.

Swami Agnivesh initiated Bandhua Mukti Morcha, or Bonded Labour Liberation Front, so as to insist India to implement its laws for the safeguard of the labor class. Till date, the organization has managed to rescue nearly 200,000 bonded laborers, who have later been rehabilitated by the government.

SWAMI AGNIVESH, BONDED LABOUR LIBERATION FRONT: When I resigned as minister for education in 1979, I went straight to the stone quarries very close to Delhi that is in Faridabad area, and also to some of the brick kilns, where the laborers were bought and sold like chattel slavery. Then it was a great shock for me that right under the nose of our federal parliament and federal judiciary, Supreme Court of India, this practice was rampant.

When I got released, some of these bonded laborers from the stone quarries of this Faridabad area, I wanted to get them back in their villages. So, unsuspecting, I requested for some help INR 10,000 worth of help from the then chief minister, under whom I had already worked as education minister.

But when I made that request, he was so furious. He threatened me with dire consequences. He told me point blank that next time I step into any of the stone quarries or brick kilns and come up with this bogie of bonded labor, I would not come alive–he would make sure that I was killed.

So I couldn’t understand what was the matter and why was he was so furious. Then I realized that the whole industry, the substratum, agriculture industry, is surviving on the exploitation of the cheapest source of slave labor, that is, bonded labor. So we started that movement.

BUTT: He gave us a brief glimpse into the reality of the many millions who continue to toil in bondage in brick kilns, rice mills, rock quarries, agriculture, and various other industries across the country.

The question to be asked is how these men become bonded laborers.

BHUWAN RIBU, LEGAL ACTIVIST: In India, bonded labor today exists. The maximum numbers would be in agricultural bondage. People will be taking a very small loan for little things in the village, for example a medicine or somebody’s marriage or somebody’s birth or death, and the terms of repayment of that loan will be such that a person would be required to pay interest, which is simply not practical. And so the person will probably send a child or the person will be forced to work himself. And this is the beginning of bonded labor in the agricultural context.

The other aspects are places like brick kilns. Now in every brick kiln, nobody is registering the brick kiln as per the mandate. Nobody is actually taking these people and providing them with proper minimum wages. Some advance is paid to a middle man. The middle man brings hundreds of people to work in the brick kilns. And all of them are kept in bonded labor, at least till the season ends. They are not allowed to move. They are not paid minimum wages. Nothing is happening. This is a very, very clear and in-front-of-you kind of a bonded labor, but nobody’s willing to act on it. With the construction boom, with the infrastructural growth that the country’s witnessing, the bricks are required by everyone. And yet nobody is willing to actually go the distance and provide justice to the people who are making those bricks.

The third kind of bonded labor is the bonded labor that arises out of children, trafficking. And these are children who are brought. It is not inter-generational. But children are made to work for six hours–sorry, six years, seven years because of a little bit of advance that has been paid to their families.

So this is the situation. However, nobody’s actually taking proper steps to enforce the law and eliminate the system of bonded labor.

BUTT: The country has recently initiated minimum wages program for these labors, which is $2.30 for the work of one complete day that lasts for minimum ten hours. But for those working as slaves, attaining $0.30 even is impossible.

Government officials in the Ministry of Labour estimate over 300,000 bonded laborers have been rehabilitated in the 37 years since the act against forced labor was passed. These data are based on the numbers of bonded laborers who have been able to avail of government benefits after procuring release certificates. The data does not include the actual numbers of people rescued from bondage, since many are unable to produce the necessary documents. So this may be an underestimate.

The fact is it is really hard to establish the accurate data. That’s why the current government’s claims to having abolished it are decidedly weak on this score. But why has the government failed to abolish bonded labor?

AGNIVESH: The politicians are hand-in-glove with the moneybags. They care two hoots for the condition of the laborers. And the laborers themselves are unorganized. They don’t have unions. Whatever little unions the organized sector had earlier to the globalization which has set in, they have now been weakened, because the state does not want a strong trade-union movement in the country, so that they can have more and more FDI (foreign direct investment) and such other things inside the country. So that is their sort of objective or goal.

International Labour Organization, or ILO, estimates that in 2013, over 21 million people across the world are trapped as forced labor. Of this, 11.7 million, or 56 percent, are in the Asia-Pacific region. Is it possible, as the current government claims, that none of them exists in India, the second-most populous country in the region?

TINE STAERMOSE, ILO DIRECTOR: It really is important when we’re talking about millions of people in India and other countries that are like India around the world–we have this global estimate–is that we need to understand the root causes and we need to address the root causes. So you can have these approaches, or you can remove all the forced labor and prosecute the employers, but you do not remove the root causes.

So our research, both globally but also here in India, helps us, together with our partners, the government, the employers organizations, the trade unions, and other stakeholders to understand what makes this happen. Why is this happening in different sectors, in different states? And why doesn’t it disappear with the modernization of the society in India?

BUTT: By definition, bonded laborers are denied freedom to leave their place of work and are not allowed to work elsewhere by employers for a variety of reasons, past debts being a key one. As a result, they’re cut off from access to state or central government benefits and schemes, such as the National Rural Employment Guarantee Act, or NREGA, to which they are entitled. They simply do not have the freedom to engage in such schemes.

The question remains: how can we help these laborers out of this mess?

AGNIVESH: First and foremost we need to guarantee national minimum wage like in the United States of America. You have a national minimum wage rate by hour. It used to be $7.25 per hour. Recently President Obama and his government has increased it nationally to $9 per hour. In our country it is even not that much–$9 for the whole day.

So this asymmetry in the wages in the First World, the Second World, and the third world, this is a big, big, I think, challenge for all of us to consider. The whole world must stand up for the rights of these most marginalized, the most voiceless people, the most exploited people, and they should demand–American citizens included, I am saying, their trade unions included, I’m saying–that there must be level playing field. The multinational companies should not be allowed to exploit the cheap labor of a Third World country. See, that’s why they are shifting their base or whatever, whatever business, etc. They’re looking for cheap labor. What is this? They are looking for the cheapest source of labor. Cheapest source is child labor. That means child slavery.

BUTT: For millions of those struggling hard to survive as slave laborers in India, independence is yet to arrive. Experts believe the day India starts implementing its laws for the benefit of its weaker section, which is more than 70 percent of country’s population, in that day India will actually achieve independence.

For The Real News Network, Shahana Butt in New Delhi.