Sujatha Fernandes, Professor of Sociology at Queens College, discusses how Cuban advocates for greater internet connectivity are not willing to open the country to U.S. corporations in exchange for internet access

Sujatha Fernandes, Professor of Sociology at Queens College, discusses how Cuban advocates for greater internet connectivity are not willing to open the country to U.S. corporations in exchange for internet access 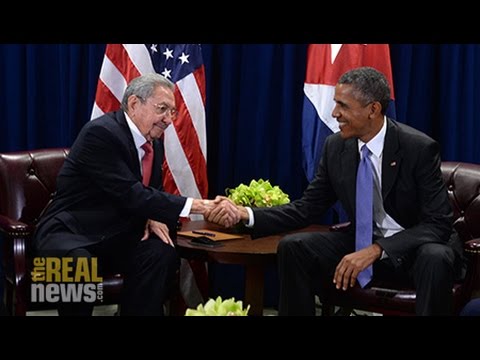 Telecommunications giant Verizon has just announced that it will be providing direct call services to Cuba and the United States. It’s another indicator that Cuban-U.S. relations are normalizing and with Obama’s visit to the Caribbean nation on Sunday, at the top of his agenda is discussing the future of the internet. Currently Cuba is one of the most expensive places to access the internet. It cost $4.50 an hour to access the world wide web. While the average monthly salary in Cuba is just $28 USD.

Here to discuss what the U.S. and Cuba normalized relations could mean for the future of the internet in Cuba is our guest, Sujatha Fernandes. She’s a professor of sociology at Queens College in New York. Thank you so much for joining us Sujatha.

SUJATHA FERNANDES: Thanks for having me on.

DESVARIEUX: So why has Cuba struggled to provide affordable internet access to its citizens? Because some people would see this as just the government wanting to keep a lid on dissent, really.

FERNANDES: So, I think that is part of it. But I don’t think that it’s the whole story. Because I think what’s often ignored by the U.S. media by groups like Freedom House, for instance, is that there are other factors that have prevented Cuba from being able to access the internet like other countries in the region. One of those is the embargo. When cables were being extended from the United States to South America, Cuba was left out of that. The cables bypassed Cuba because of the embargo and because the U.S. under the embargo was not allowed to provide any kind of telecommunications infrastructure, do any kind of business with Cuba. So Cuba just missed out having a cable that would supply internet infrastructure to its country.

So that’s one of the reasons now in 1992 after the Helms-Burton bill wanted to use the internet for democracy, supple democracy promotion in Cuba. There were greater efforts in spring actually at that point; provided a satellite to Cuba and that’s where most of Cuba’s access came from. But it was still very little. At that point as well in 1992, Cuba had just recently suffered the collapse of the Soviet Union and was going undergoing a tremendous economic crisis and just didn’t have the money to be able to invest in its internet infrastructure. So for a variety of reasons, you know, not only to do with the government wanting to clamp down on freedom of expression as its often presented. But due to the [imbibed] self, due to the lack of funds and resources. It has been sometime that Cuba has not had the ability to access the internet easily.

Now in 2011 Venezuela provided a cable, a fiber optic cable, going all the way from Venezuela to Santiago de Cuba, in the east of Cuba. That is where Cuba now gets most of its internet connectivity from. As a result of that they have been able to offer for the first time, public internet service as what we just mentioned $4.50 an hour internet card and internet cafes. As well as $2 an hour internet hotspots and despite the fact that for the average Cuban this is very expensive, the services are still getting used a lot which shows how much Cubans really want to have the internet.

DESVARIEUX: Yeah, they really want it and that’s part of President Obama’s trip, they’re going to be discussing this. What do you think the U.S. is likely to propose in order to fill this need?

FERNANDES: Well they’ve already done quite a few things. They have for instance, the New York times has put out an editorial last November, saying that Obama has sort of reached out and offered to rebuild Cuba’s telecommunications stretch there were really no barriers in place. They said, we think Google should be invited by the Cuban government to completely remake Cuba’s infrastructure. This was also, in January this year there was a visit by [ ] and [ ] who also from the U.S. state department, who went and visited Cuba and was making the same kind of argument that Cuba really needs to open up. They need to let down their barriers. They need to let corporations like Google come in and remake their internet infrastructure and that’s the only way that Cuban people will have access to the internet.

DESVARIEUX: All right Sujatha, I know you’re not buying that. So what are you suggesting would be an alternative?

FERNANDES: Well, you know it’s not just me but its advocates for greater connectivity in Cuba. The kind of people on the ground who really are fighting to get greater internet connectivity and for Cuba to be able to access the internet are saying, this is not the right way to go about it. I follow many of them in saying, well there needs to be first of all not just a focus of going online. I think that the focus on the internet is one. But there also needs to be connected software applications to allow connectivity and computerization to basic services like banking which is only partly computerized. Which makes something like sending a transfer across the country incredibly difficult.

They’re also saying they want robust privacy protections. Because if there’s anything that scares Cubans it’s not that the fact that the Cuban government is going to spy on them, there’s going to be surveillance. As much as it is that they’ve seen how the internet, the global internet, is so corrupted by surveillance. By the National Security Agency and other kinds of ways that the U.S. government uses the internet as a means of spying. So Cubans are very worried about this they’re worried about the vulnerability of the internet to surveillance and spying by the U.S. government. And one of the things that is very strong in the agency is whatever that they do should be very robust privacy protections in place.

DESVARIEUX: But Sujatha, you’ll have some people that would argue how do we really know what the majority of Cubans want when you have a country where dissent is really not tolerated by the government? So how do we have this discussion?

FERNANDES: Well, I mean, I’m saying it from, pulling it from the kinds of people I know who have invested many years, working with the internet in Cuba trying to figure out what are the best parts. When you have a great depth and wealth of knowledge about the history of the internet and have interacted a lot with the state and are also very critical of the state. I don’t believe that its unproblematic that the government does sensor and control things like the national internet and people’s access and restrict people’s access. All of that is there but what they are saying and I think it’s something that has been widely reported in Cuba is this way that the U.S. uses the internet spy on its citizens. People know that in Cuba. That’s pretty much generally a known thing and it does make people nervous. I’ve heard it and so too have the advocates within Cuba heard that this is something that is going to be an issue.

DESVARIEUX: Alright, Sujatha Fernandes. Thank you so much for joining us.

October 22, 2019
Sign Up for Our Newsletter
Help Us Make Real News!