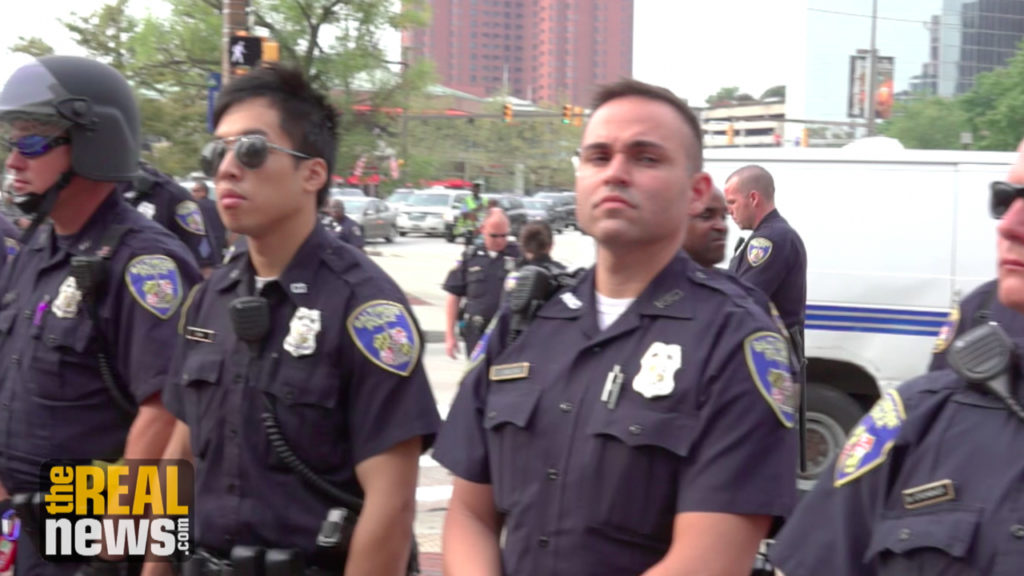 TAYA GRAHAM: This is Taya Graham reporting for The Real News Network in Annapolis, Maryland.

On Jeff Sessions’ exit from the Department of Justice, he left a last minute memorandum limiting federal investigations. How will it affect police departments like Baltimore, who are seeking reform and are under a consent decree?

Sessions made the last second move to dial back federal police oversight just before Trump asked for and received his resignation. The order would limit the ability of the department’s Office of Civil Rights to investigate police departments and enter into consent decrees. Baltimore City entered its own consent decree with the Department of Justice shortly after the DOJ found that the Baltimore City Police Department engaged in unconstitutional and racist tactics.

VANITA GUPTA: The police department made roughly 44 percent of its stops in two small, predominantly African American districts that contain only 11 percent of the city’s population.

TAYA GRAHAM: But Sessions’ last minute move raises a question: how will it affect cities like Baltimore, already under the scrutiny of the DOJ? The city’s top lawyer, Andre Davis, said he was not concerned.

ANDRE DAVIS: If that’s what it took to get him out of the Justice Department, that’s fine. It’s not going to affect Baltimore. It may well affect some cities down the line.

DAVID ROCAH: The order is a travesty. And a repulsive piece of ideological decision-making utterly at odds with the rule of law. That being said, it’s not going to have any effect on the Consent Decree here in Baltimore because that consent decree is already in place and can’t be changed at the whim of political ideologues.

TAYA GRAHAM: But that’s where their agreement ends, particularly given what transpired during the initial public hearing of a police corruption taskforce in the Maryland state capital of Annapolis, the hearing the first of the commission to restore trust in policing that was formed to investigate the Gun Trace Task Force scandal. The GTTF, as it was called, was a group of eight officers who plead guilty or were convicted of dealing drugs, robbing residents and stealing overtime.

TAYA GRAHAM: But during the hearing, little was said of their crimes or how they operated with impunity. Instead, the officials heard an often dry explication of the department’s management structure.

DANIEL BECK: The Gun Trace Task Force was created in 2007 under Commissioner Bealefeld. It originally consisted of detectives from the Baltimore Police Department, the Maryland State Police Bureau of Alcohol Tobacco and Firearms. Baltimore County joined in 2008 and then Anne Arundel County also joined this multi-jurisdictional task force.

TAYA GRAHAM: And even more intriguing was the presence of lawyers who have worked for or with the powerful police union, the Fraternal Order of Police.

STEPHEN JANIS: Has there been a look at the citizen complaints when it was a regional task force as opposed to when it became more centralized within the agency?

DANIEL BECK: I don’t have any information whether or not they’ve compared those two.

TAYA GRAHAM: We asked the group’s chairman if that presented a conflict and he said no.

STEPHEN JANIS: Now, I saw people like Sean Malone, who’ve worked with the police union. Do you think that compromises this effort at all, to have police union representatives asking questions about this subject matter?

ALEXANDER WILLIAMS: No. We all have our individual experiences and all of us have had backgrounds with specific leaning.

TAYA GRAHAM: The only moment to offer any insight into the underlying driving force behind police dysfunction was Davis’ critique of the city’s civilian review board.

TAYA GRAHAM: The civilian review board, or CRB, is the only civilian police oversight body in Baltimore. But as Davis pointed out, the board has little, if any, power.

ANDRE DAVIS: The statue desperately needs to be revised. And that is the source of the conflict between the city Law Department and the existing Civilian Review Board.

TAYA GRAHAM: Davis’ office has been in dispute with the CRB for several months, after he asked them to sign a non-disclosure form. The board sued, claiming police were withholding hundreds of complaints. But Davis says the lawsuit is meritless.

ANDRE DAVIS: Meanwhile, the CRB is very unhappy, the members of the Civilian Review Board because of a number of reasons, most of them going back to the fact that the statute that created them gave them no resources, no funding and very little training. Investigators and witnesses may not be disclosed or released to the public. It’s right there in the statute from 1999. We’re not doing anything new. So we have this confidentiality requirement that the Law Department drafted and have asked the Civilian Review Board members to sign and go about their business.

It won’t change anything they do because all of the constraints that they don’t like are right there in the statute. We are trying to protect them from potential criminal liability. They don’t agree with us.

TAYA GRAHAM: And ignores the real problem created by the special protections afforded police in the Law Enforcement Officers Bill of Rights. But Rocah disagrees and says Davis’ effort to stymie the board points to an administration that is not committed to police reform.

DAVID ROCAH: You have the extraordinary situation where the city’s chief lawyer, who was supposed to by his own declaration, represent the interests of the CRB, is acting in a flagrantly illegal manner and telling the BPD to illegally withhold records that they are statutorily obligated to provide to the CRB.

DAVID ROCAH: The only power that the CRB findings have is that they put the public on notice that there was somebody other than the police department itself who investigated and found wrongdoing. That’s critically important because the police department’s own investigations, by virtue of a fairly recent Court of Appeals decision are a complete black box about which the press and the public can know absolutely nothing.

But if we’re going to have that insane system, to also say that the investigations that will be the basis for this discipline are going to be secret. And never subjected to any scrutiny, how and why could anyone have any reasonable confidence that anything is being done, ethically, competently thoroughly, et cetera? Any department or any public official who was as committed to transparency and accountability, as lots of public officials, including Andre Davis say they are, their very first order of business would be to ensure that the state laws are changed so that there wasn’t this mandatory cloak of secrecy around these investigations.

TAYA GRAHAM: Which points to a dilemma that goes beyond what happens in Washington and suggests that the obstacles to police reform are deeper and more intractable than a simple stroke of a pen.

This is Taya Graham and Stephen Janis reporting for The Real News Network in Baltimore City, Maryland.