In yet another rebuke to Trump, the Senate passed a binding resolution to prevent Trump from going to war with Iran. Even though Trump will veto it, after it passes the House, it shows growing disagreement with his foreign policy

In yet another rebuke to Trump, the Senate passed a binding resolution to prevent Trump from going to war with Iran. Even though Trump will veto it, after it passes the House, it shows growing disagreement with his foreign policy 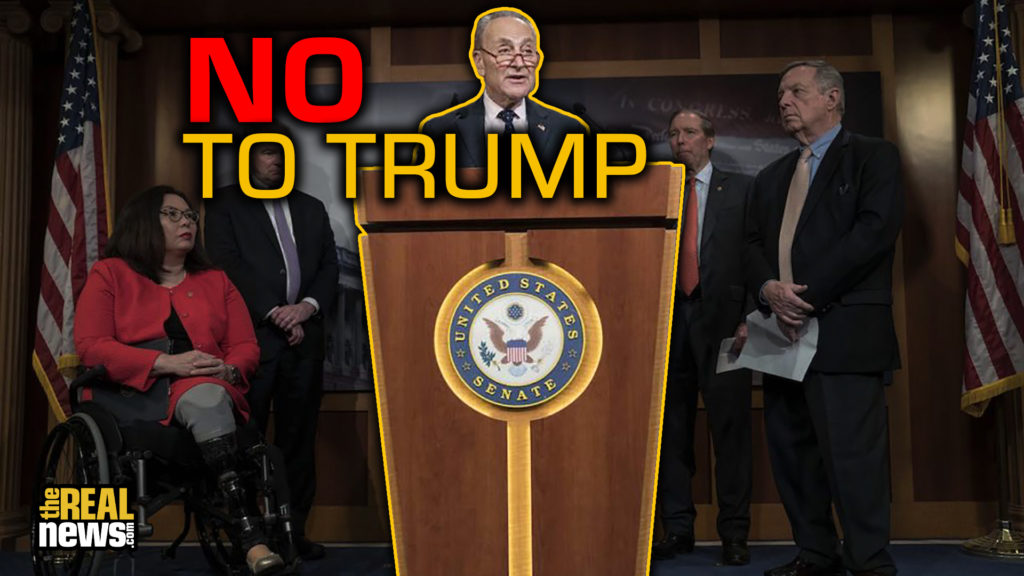 TODD YOUNG: The yeas are 55. The nays are 45. The joint resolution as amended is passed.

What we just saw was the U.S. Senate voting in a 55 to 45 vote to pass a binding resolution on Thursday, which invokes the War Powers Act and Article I of the U.S. Constitution. The resolution tells President Trump that he cannot engage in military action against Iran without congressional authorization. Eight Republicans joined all 45 Democrats and two Independents in voting for the resolution.

The day before the vote, on Wednesday, President Trump sent out a tweet stating, “It is very important for our country’s security that the United States Senate not to vote for the Iran War Powers Resolution. We are doing very well with Iran, and this is not the time to show weakness. Americans overwhelmingly support our attack on terrorist Soleimani. If my hands were tied, Iran would have a field day. It sends a very bad signal. The Democrats are only doing this as an attempt to embarrass the Republican Party. Do not let it happen.”

Tim Kaine, Democratic Senator of Virginia, who sponsored the resolution, responded to Trump as follows:

TIM KAINE: If we decide to go to war, we should do it based on careful deliberation. Some view this as an effort to tie President Trump’s hands. It’s not really about President Trump. It’s really not even about the president. It’s about Congress. It’s about Congress fully inhabiting our Article I role to declare war and taking that deliberation seriously. Some thought, “Well, maybe this will send a bad message to adversaries around the world.” We don’t send a message of weakness when we stand up for the rule of law in a world that hungers for more rule of law.

GREG WILPERT: The resolution now goes to the House of Representatives where it is expected to pass easily since Democrats have a majority of votes there. It would then go to Trump, who in all likelihood will veto the resolution. House Democrats already passed a similar but nonbinding resolution last month, which the Senate never took up.

Joining me to discuss the Senate’s resolution of Senate Joint Resolution 68 is Hassan El-Tayyab. He is the lead lobbyist with the Friends Committee on National Legislation on Middle East policy. Thanks again, Hassan, for joining us.

HASSAN EL-TAYYAB: Thanks so much, Greg. Appreciate it.

GREG WILPERT: How significant is the passage of this resolution that invokes the War Powers Act? I mean after all, once it passes the house, Trump will veto it, and it is very doubtful that Congress can override the veto since two thirds of both the House and the Senate are needed to vote for the override. So why is it so important that this bill passed?

HASSAN EL-TAYYAB: Well, yeah. I think it’s a tremendous victory in the peace movement and we should really applaud Senator Kaine, all the Democrats that voted for it, and eight Republicans that joined as well. Article I, Section 8 of the Constitution is absolutely clear. Only Congress can declare war, not the president. This was specifically designed by our Framers to make it harder to go to war, and to make sure that the people through their elected representatives had a say in these really critical decisions of whether or not we should go to war or not. It’s also designed to prevent endless wars.

Again, this is the largest bipartisan coalition we’ve ever seen in U.S. history for a war powers resolution. And for them to unequivocally say, “No, the president does not have the authority to go war,” is absolutely significant. I think it sends the right message to the Trump administration and will make sure that he knows that Congress and the American people want restraint with regards to Iran.

I think it’s the right message to send to Iran as well; to show that America, we respect the rule of law as Senator Kaine says, and also to prevent any risk of miscalculation. If the Iranians know that there is a growing movement in the U.S. that’s calling for restraint, it’ll prevent I think miscalculations and accidents from happening, which could spark a larger escalation.

GREG WILPERT: Actually, my next question has to do with what you just said. Trump argues in his tweet that the bill makes the U.S. less safe because now the president’s hands are tied. Can you say a little bit more about what’s your response to that argument?

HASSAN EL-TAYYAB: Well, I think that argument is pretty ridiculous. If you’ve read the Constitution and the War Powers Resolution of 1973, and even if you read S.J. Res. 68, the bill that Senator Kaine just passed through the Senate, it basically says this would prevent offensive war against Iran, prevent further assassination attempts, and does nothing to hinder the ability of the commander-in-chief to basically defend the U.S. or its armed forces in case of an attack. So I think that argument by anyone that’s making it, it’s just not really done in good faith, or done out of ignorance because that’s just not how the bill is written.

GREG WILPERT: Now, what this resolution does is basically it invokes both the War Powers Resolution of 1973, which was passed in the wake of the Vietnam War, and Article I of the Constitution, which both state that Congress has the sole power to declare war. Now, if this authority is so clear, why is it even necessary for a resolution to be passed on Iran? Couldn’t Congress simply take the president to court?

HASSAN EL-TAYYAB: Yeah, you ask the million-dollar question. Unfortunately, we’ve had decades of abdication of this critical Article I, Section 8 war authority by Congress. Year after year, the presidents going all the way back to Truman with the Korean War, the Vietnam War, bombing Cambodia, covert action around Latin America, we’ve seen Congress basically just give the presidents a pass. But right now we’re seeing Congress start to claw back that war authority with the passage of the Yemen War Powers Resolution, trying to repeal the 2002 Iraq AUMF that we used to go after Saddam Hussein, and now the Iran War Powers Resolution that just passed.

I think that’s part of a longer-term process of Congress clawing back this war authority, and yes, going to the Supreme Court would be another escalation that Congress could certainly do and probably should do because, again, like you said you should not need a supermajority to prevent the president from launching an unauthorized war.

That’s what we’re seeing now. We’re seeing the early stages of this critical separation of powers battle that’s going on between the White House and the legislature, and I hope it continues. The sheer fact that we had eight Republicans join this chorus of voices calling for no war on Iran, I think is also significant. As much as we can make this a bipartisan issue, one that’s depoliticized … We’re not talking about Trump. This should be the case no matter who the administration is, if it’s a Democrat, or a Republican in the White House, and even an Independent, we just want to make sure that we have that constitutional process that’s adhered to.

GREG WILPERT: Now, many Democrats have been rather lukewarm about condemning Trump’s actions against Iran so far, such as basically the killing of Soleimani. What do you think Democrats ought to be pushing for as a foreign policy towards Iran?

HASSAN EL-TAYYAB: Well, I think we need to return to the JCPOA, or aka the Iran nuclear deal, and we need to find a pathway for diplomacy. Escalation of threats, drone strikes, war planning, hostile rhetoric, that makes the U.S. less safe, and makes the Middle East less stable. That is not good for anybody. A war with Iran would be absolutely catastrophic for human lives, U.S. troops that would be killed in the result of a massive confrontation with Iran. Obviously, it hurts the health of our planet. So we need to find a pathway for diplomacy, hands down.

One, I will say the maximum pressure and sanctions that the Trump Administration has put in place after pulling out of the Iran nuclear deal has been a maximum failure. I mean, we’ve seen a more destabilized the Middle East. We’ve seen the U.S. diplomats being pulled out of Iraq. That is not a safer Middle East, a safer U.S. Again, like I said, diplomacy with the help of the international community is the best way going forward, and maximum pressure sanctions that punish the Iranian people preventing people that may even be sympathetic to not liking the actions of the regime, we’re preventing them from getting cancer meds, I see in no way does that help us.

GREG WILPERT: Now finally, with a vote coming up in the House, first of all, when is the vote going to happen do you think, and what can people do who support this resolution?

HASSAN EL-TAYYAB: Yeah, great question. It’s a little unclear right now when that vote will be. The House is on recess, and they’re not coming back until the week of the 24th. I’ve heard that it could be as early as February 28th that we would have that vote. Folks should just be calling their representatives right now and urging that they vote yes on Senator Kaine’s Iran War Powers Resolution to prevent an unauthorized war against Iran.

This is especially important if you have a Republican representative. We want to make sure we have a large coalition of Republicans that are calling for restraint, calling for the authorization for use of military force. Also, make sure that they come out and do a floor statement. There’s a lot more they can do besides just vote for the resolution. They should be calling for diplomacy, restraint, a reassertion of constitutional war authority, and a return the Iran nuclear deal.

GREG WILPERT: As usual, we’re going to continue to follow this story, but we leave it here for now. I was speaking to Hassan El-Tayyab, lead lobbyist of the Friends Committee on National Legislation on Middle East policy. Thanks again, Hassan, for having joined us today.

HASSAN EL-TAYYAB: Yeah. Thank you so much, Greg.

Hassan El-Tayyab is the Friends Committee on National Legislation’s lead lobbyist on Middle East policy. He is also responsible for representing FCNL with the various coalitions that work on these issues.