New and Old Strategies for Ending the Bolivarian Revolution in Venezuela

Prof. Steve Ellner discusses US intervention in Venezuela, the opposition's amnesty law, and their latest strategies for ousting the president.

Prof. Steve Ellner discusses US intervention in Venezuela, the opposition's amnesty law, and their latest strategies for ousting the president. 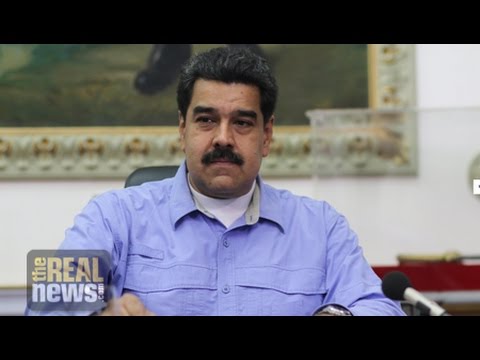 During the Democratic presidential debate in Florida between Bernie Sanders and Hillary Clinton, both candidates were asked about their position towards Cuba. In the course of their answers, Sanders referred to US history of US interventionism in Latin America and to the Monroe Doctrine. Here’s a clip.

Throughout the history of our relationship with Latin America we’ve operated under the so-called Monroe Doctrine, and that said that the United States had the right to do anything that they wanted to do in Latin America. So, I actually went to Nicaragua, and I very strongly opposed the Reagan administration’s effort to overthrow that government, and I strongly opposed, earlier, Henry Kissinger and the overthrow of the government of Salvador Allende in Chile. I think the United States should be working with governments around the world, not getting involved in regime change.

And all of these actions, by the way, in Latin America, brought forth a lot of very strong, anti-American sentiments.

WILPERT: The complaint that Sanders about US interventionism is one that Venezuela’s President Nicolás Maduro raised yesterday, too, when he decided to withdraw Venezuela’s highest diplomat in the US–There is no ambassador at the moment–In reaction to President Obama’s recent renewal of a decree that declares Venezuela to be an extraordinary threat to US national security.

With us today to discuss what is going on in Venezuela and in US-Venezuela relations is Steve Ellner. Steve is professor emeritus of history from the Universidad de Oriente in Venezuela, where he has lived for over 40 years. He is most recently author of “Rethinking Venezuelan Politics.” Thanks for joining us, Steve.

STEVE ELLNER: Sure, well, thanks for having me on, Greg.

WILPERT: So let us start, first, with this idea, or this complaint, that President Maduro recently raised with regard to the renewal of this decree that Obama renewed recently, saying that Venezuela is a, represents a threat to national security. What’s going on in US-Venezuela relations? I mean, what would you say this means, the fact that he’s withdrawing it and that Obama recently renewed this decree?

ELLNER: Well I think firstly, to place that, Greg, in historical context, you know, after the end of the Cold War in 1991 a lot of people felt that US, the history of US intervention during the Cold War, that extended period from World War II to 1991, that the US would maintain a different position, a position in support of democracy and non-intervention. That, obviously, hasn’t happened, in a lot of cases, at least.

And in the case of Venezuela in particular, the United States has played a very direct and indirect role in Venezuelan politics, beginning with the coup in 2002 which the United States supported, although there’s a lot of controversy as to what that support actually consisted of, and since then the United States has supported the Venezuelan opposition. A lot of financial support has gone to the opposition. The National Endowment for Democracy, for instance, which extended limited support to political parties and political groups and social groups in Venezuela prior to Chávez’ advent to power, became the number one recipient of economic support from the National Endowment for Democracy.

So that, the US position has, throughout this 16, 17-year period of Chavista rule, has been quite evident. With regard to the Obama order, which states that Venezuela is an unusual and extraordinary threat to US security, it’s really hard to take it seriously. I mean, there’s really no evidence to that effect, and it would seem that the order is really meant to create an atmosphere, a, you know, public opinion in the United States in favor of the opposition at a time when the opposition did well in the recent elections for the national assembly and is calling for the ouster of the Maduro government.

So at this particular moment it would seem as if the order is really meant to strengthen the position of the opposition, especially when it comes to US public opinion.

WILPERT: So, and the other thing that of course, one of the things that’s coming up in Venezuela is, we’ll get into that later, but the whole plan that the opposition has for ousting Maduro, but one of the things that they’re also, that’s very high on their agenda, is this law of amnesty, where they’re trying to allow, or trying to free everyone who has recently been imprisoned during the Chávez and Maduro governments that in many [ways] was connected to politics. How is that, is that in any way connected? Is that also giving legitimacy to the opposition?

Is the US giving legitimacy to the opposition in its effort to basically give an amnesty like this, a blanket amnesty to anyone, practically, who was involved in any kind of demonstration no matter what kind of damage they did or who they even might have killed, actually?

ELLNER: Yeah. The, I think the point to emphasize is that, from the [unintelligible] [political] prisoners that was a banner of the opposition and was supported by the White House, the state department, the spokespeople for the US government called on the Venezuelan government to liberate political prisoners. At no moment was any differentiation made between prisoners who were in prison because of acts of violence and prisoners who were in prison because of other actions, and specifically, Greg, back in, two years ago in 2014, there was a period of between three and four months of civil disobedience and violence in Venezuela. It’s called the guarimba. That’s the term that’s used in Venezuela.

It took place between February and May of 2014, and during that period you didn’t have any legal protests. Though the protests were illegal, but you had two sets of protests. One was civil disobedience, in which the protesters were blocking traffic, you know, shutting down traffic, building barricades and that kind of thing. And then there was the violent protests, which involved destruction of public property. Nearly all the metro stations in the eastern, wealthy part of Caracas were heavily damaged. Nearly 100 metro buses were heavily damaged. Federal buildings were damaged, Cuban doctors were attacked. There were about 150 cases of, reported cases of Cuban doctors who were attacked.

So this was the violent side of this campaign to oust Maduro from the presidency. Now, it would appear that the call for the liberation of any prisoner who was involved in nonviolent civil disobedience is quite different from the call for the liberation of those prisoners who are being accused of abetting, promoting or being involved directly in acts of violence. No differentiation was made either on the part of the opposition or on the part of the US government, and that’s the case now with this law of amnesty. No differentiation is made between those who are accused of acts of violence and those who are in prison as a result of civil disobedience.

WILPERT: And it seems interesting, though, that, I mean, the opposition is calling them, obviously, political prisoners, and the US is in effect doing the same thing in supporting the opposition. And it seems that they have no criticism whatsoever of letting people go who were involved in violent protest. Or do you see any indication there that the US is, in any way, kind of hesitant to support what the opposition is doing?

ELLNER: No. When it comes to the banner of the liberation of political prisoners, no. No, there, as I said before, there is no differentiation between these two sets of prisoners. In fact, it’s even unclear who is who with regard to the people who are in prison. But obviously, many of the prisoners are being accused of acts of violence and not only acts of violence but shootings. There were 43 people who were killed.

You know, Greg, in the United States when a police person is killed, that is a particularly serious offense. Somebody who kills a police officer doesn’t get off, I mean, you know, probably will be executed if in that state there is capital punishment, you know, and in the US they call them cop killers, and that’s the worst of worst. Now there were six national guardspeople who were killed during these demonstrations. Six. And so it seems to me that by not differentiating or not specifying exactly who should be freed, this, as you call it, this blanket kind of amnesty is really taking in people who were involved in acts of violence.

WILPERT: Well, we’ve run out of time for the first segment, but join us for the second segment where we’ll talk about the opposition’s plans on getting rid of Maduro. We’ll be right back. Thanks for joining us at therealnews.com.

Steve Ellner is a Contributing Editor ofLatin American Perspectives and the editor of “Latin America’s Radical Left: Challenges and Complexities of Political Power in the Twenty-First Century.