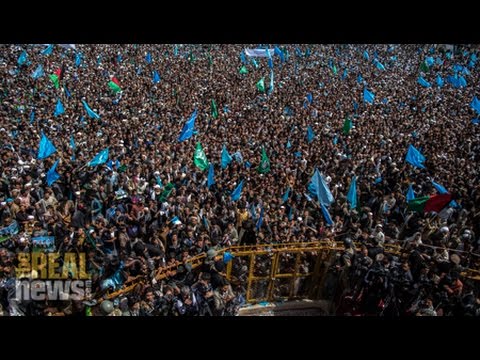 The new unity government in Afghanistan, led by President Ashraf Ghani, was inaugurated on Monday. And on Tuesday, a bilateral security agreement with the United States was signed that would allow some 10,000 U.S. troops to remain in the country after this year.

To discuss Afghanistan’s new leadership and challenges ahead, we are joined by Shukria Dellawar. Shukria is a senior fellow at the Center for International Policy. She’s an expert on Afghanistan security, reconciliation, and human rights issues and has led several fact-finding missions to Kabul.

Thanks so much for joining us today.

SHUKRIA DELLAWAR, SENIOR FELLOW, CENTER FOR INTERNATIONAL POLICY: Thank you. Good to be with you.

PERIES: So tell us more about the unity government. How is it constituted? It was six months of election verification process. So who are the players, and what hand did the U.S. have in all these negotiations?

However, months going into it, he did several times threaten to back out, and some of his supporters threatened violence. And I think U.S. played a very key role in this mediation, and John Kerry remained very active in the negotiations and bought both Ashraf Ghani and Abdullah Abdullah to the negotiating table. And at the end, the unity government was formed. However, this is going to be–it during the process, a lot of the ethnic and factional issues were heightened, and both men now, who–Ashraf Ghani will lead as president, and Abdullah Abdullah is chief executive officer with quasi-prime ministerial roles. They will have to put those tensions of the last several months aside and work together.

And there’s going to be many challenges ahead, actually starting today, because both parties have promised their supporters several posts, so there’s going to be negotiations over that and who gets what post from which camp. So this is all going to be divided. It’s not really a one-leader presidency. It really is two at this point.

PERIES: And tell us more about President Ashraf Ghani.

DELLAWAR: Well, Ashraf Ghani is a former World Bank technocrat. He has a doctorate from Columbia University. He’s Western-educated. He’s a renowned intellectual. Afghans have tremendous respect for him. He did write the book on failed states. So I think this is his turn now, his moment, to put his own theory into practice, as Afghanistan’s one of the major failed states.

PERIES: Right. And I understand that president of Pakistan was the only head of state president during the inauguration, and Pakistan has had tumultuous relations with the Afghan recently. Could you explain to us what they might be and what some of the tensions are?

DELLAWAR: Sure. I think that it was very–an extension of goodwill from Pakistan that the head of state was present. But most heads of state and dignitaries were not present, mainly because of the security challenges inside Afghanistan. Even on election day there was a suicide bombing near the Kabul airport. So such challenges remain.

But, anyhow, the tension, the main tension with Pakistan that Afghanistan faces is the Taliban insurgency and the continuous distrust in the relationship that’s been aided by elements within Pakistan. So, hopefully, with the change in presidency in Afghanistan and leadership in Afghanistan and Ashraf Ghani’s conciliatory tone towards Pakistan and seeking to rebuild neighborly relations, that should start a different [movement (?)]. But many, many challenges remain between both countries, as the trust has been diminished for the last 14 years.

PERIES: Shukria, you mentioned the attacks near the airport during the inauguration. And I imagine this was conducted by the Taliban. Do you expect that there would be this kind of rebellion, continued rebellion against the presidency of Ghani?

DELLAWAR: Yes. The Taliban spokesperson has made a statement that they do not accept Ashraf Ghani as the president or any of the current administration members as legitimate, that it is a foreign-installed government. That has been a consistent rhetoric from the Taliban, even during President Karzai’s term. So that hasn’t changed.

But at the same time, because they know, the Taliban know the U.S. is on its way out and 10,000 troops is very minimal compared to the over 100,000 U.S. troops that were in Afghanistan around 2001 and ’02. So they’re using this moment to mount attacks, because this will–even if there is going to be negotiations, it gives them more leverage to continue to basically wreak havoc in Afghanistan. At the same time, I think there are Afghan Taliban commanders who are working towards peace and reconciliation, but it’s done behind closed doors. And [as] long as Pakistan doesn’t take more initiative and bringing Taliban to the negotiating table and facilitating that, it’s going to be a continuous hurdle.

PERIES: And, finally, what kind of leadership does this new coalition provide in terms of women’s rights in the country?

DELLAWAR: I think Ashraf Ghani is going to bring further change in women’s rights. Women’s rights during President Karzai’s term was one of the significant successes, as well as media–media, women’s rights, and education. And I think on all three of those fronts, President Ghani will also build on that. He’s also had several supporters from women during the campaign, several women’s rights activists supporting him. Ashraf Ghani has promised to appoint one female to the Supreme Court. And in addition, he’s also said that his wife will be a public figure in his administration. So this is a shift, because President Karzai never bought his wife up in public. So this is showing that he’s definitely going to try to make a change there as far as women’s role in Afghanistan and their progress.

DELLAWAR: Right now, most ordinary people are just–they’ve been very frustrated with the long, drawn-out election process. Their trust has been lost, because, obviously, when you go out and you vote and some Afghanistan’s had their fingers chopped by the Taliban, that you expect a clear winner. There was no clear winner in this election. So it’s sort of both parties with the highest votes who were put in power.

That aside, that is the least ugly outcome for Afghanistan. It could have been worse. It could have gone into civil war with a continued contesting of the elections. So Afghans are pragmatic.

But at the same time, the people on the ground, they’re disheartened. Their main thing right now: most Afghans, they want jobs, employment, development, and they want rule of law. So it’s development, peace, and security. This is their concern. And hopefully this administration, with having better relations, both Ghani and Abdullah have better relations with the U.S. and the West than outgoing president Hamid Karzai. So most Afghans just have this streak of hope that the change in leadership will secure Western international support, and hopefully change, transfer the country from this [federal state (?)].

But many, many challenges remain. There’s much corruption to be dealt with. There’s insecurity. There’s the Taliban insurgency. And there’s this international/Western loss of appetite for continuing to work with Afghanistan if the leadership doesn’t step up to the plate. So that’s the expectation in the challenges ahead.

PERIES: Shukria, thank you so much for joining us today.

Shukria Dellawar is a senior fellow at the Center for International Policy. She is an Afghan-born American citizen and has led several fact-finding missions to Afghanistan. She is the former director of the Afghanistan Study Group. She has also served in the defense sector as a political analyst and cultural advisor. Her expertise is focused…