What Role Can Social Media Play in Supporting Protests Against Egypt’s Military Regime? 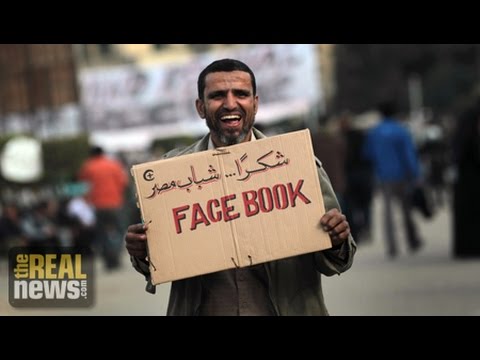 On the week of the anniversary of Tahrir Square–that’s the January 25 Revolution–I’m in conversation with Professor Seif Da’na. He’s professor of sociology and international studies at the University of Wisconsin-Parkside.

Thank you so much for joining me, Seif.

PERIES: So, Seif, the attack on the activist, you know, which has really taken off in social media, one is reminded that the original Tahrir Square January 25 Revolution got its life also through the social media. Do you think there’s any possibility that this might re-spark that movement?

DA’NA: Well, essentially we have currently a situation that is unstable. There is no stability in Egypt at this point, which basically means that it’s not over yet in Egypt. We’ve seen four regimes in the last four years, and that basically signified that we don’t have stability. None of the regimes were able to solve or deal with the major issues that people were demanding.

Currently, the current regime was to some extent very popular at the beginning, given the mistakes that were done by the Muslim Brotherhood. So, from July 2013, when the current regime came to power, essentially in the form of a military coup, and later was elected in and gained legitimacy through elections, the popularity of the regime declined significantly at this point, and some of the activists and some of the forces in Egypt who sided with the military at the beginning are not supporting the military now.

In the future, well, basically, on Monday, next Monday, the opening for the registration and candidacy for the parliamentary election will take place–hopefully, it will take place. And the regime failed to actually to establish a unified list. Sisi called on different political groups in Egypt to form a unified list to support his legitimacy. He failed. We don’t have a unified list.

What we have instead at this point is a case before the court challenging the constitutionality of the election laws, which basically means if the regime doesn’t see, after seeing the performance of the court system, if his regime doesn’t see its interests in an election, a parliamentary election, they might actually use that case before the court as a pretext to delay the elections in the future.

PERIES: Right. And so what is to come of Egypt? What do you think is the next steps in terms of trying to restore the original hopes of the January 25 Revolution?

DA’NA: I don’t think there is–going back in the Arab world, we have a clash on all fronts at this point in the Middle East. Unfortunately, in some cases it’s very violent, like the case of Syria. Also in Egypt sometimes it is very violent. We have the comeback of the Interior Ministry, with its own Mubarak-era tactics of torture and violations of every basic rule. But, essentially, we have also other kinds of clashes. I mean, the idea of democratic transition that I talked about originally is part of the debate in the Arab world, part of the debate between the Arab intellectuals. So these things are in the open, and everybody is discussing these fundamental issues.

The economic system in the Arab world is also a matter of debate, and there is no, really, popularity for whether people can actually characterize this as neoliberal policies or not. They understand and they feel that this system doesn’t serve their interest and actually it’s impoverishing them.

So these things are out there now, and it will be very difficult to imagine that the Arab people would actually submit.

I think what’s happening in Syria and what’s happening in part of Egypt is actually might be pushing some people away from the idea of change and idea of revolution. But I think that will be temporary only. The new generation is different, and the idea of the socioeconomic demands will persist. And as long as they persist, we’ll see a push for that.

Now, are we going to see the same scenes we’ve seen in the Tahrir Square in 2011? I doubt that we’ll see something similar to that very soon. But as long as there is instability, everything is possible in the Arab world,–

PERIES: Professor Da’na, who is actually in control? We’ve seen all these transitions and, you know, different efforts to govern in Egypt. But who’s really in control of what’s happening in Egypt?

DA’NA: Well, that almost–most powerful forces in Egypt at this point–and I don’t think–and I also think part of the dynamics at this point is that there might have been a tension before between them, but their interest is bringing them together. And that is the military and the security forces.

During the Mubarak era, Mubarak’s interest was not really in any external conflict. And therefore he empowered the security forces in the Interior Ministry, and his target and his goal was to maintain order inside Egypt.

The January 25 Revolution actually weakened the security forces and empowered the military to some extent. And that [is] actually what actually enabled the military to go forward with the coup in on July 30, 2013, because people actually did hate the Interior Ministry and the security forces, the police, and the central security forces, as they’re called. And now these are the two most important forces in Egypt that actually have, basically, all the power. The military is busy, though, not only in Sinai, but in other areas in Egypt, fighting ISIS and fighting some terrorist groups and terrorist actions. And it’s also one of the tools that is facing the Muslim Brotherhood.

PERIES: Professor Da’na, let’s talk about what has happened in terms of the counterrevolution in our next segment. Thank you so much for joining me.