Special Report: Scots in Their Own Words on Independence 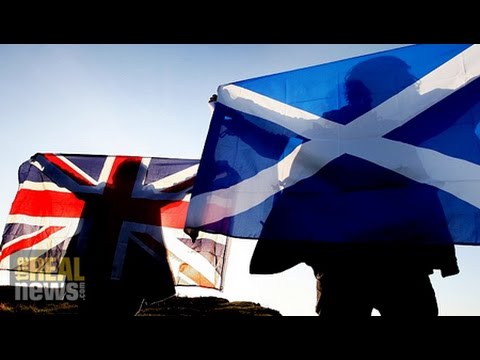 Coproduced by Alan Knight and Tim Mitchell in Scotland

JAISAL NOOR, TRNN PRODUCER: The people of Scotland head to the polls on Thursday to vote on whether to get independence from the United Kingdom. Scotland has been part of the U.K. for the past three centuries but has its own local parliament. Some Scots, who make up about 8 percent of U.K.’s population, want more local governance and freedom from London, who often vote in more right-wing governments than Scotland does. Prime Minister David Cameron, a Tory, is a staunch opponent of independence, and his government has embraced neoliberal policies and austerity at the cost of the social safety net.

DAVID CAMERON, U.K. PRIME MINISTER: And it’s my duty to be clear about the likely consequences of a yes vote. Independence would not be a trial separation; it would be a painful divorce. And as prime minister, I have to tell you what that would mean. It would mean we no longer share the same currency. It would mean the Armed Forces we built up together over centuries being split up forever. It would mean our pension funds being sliced up at some cost. It would mean the borders we have would become international and may no longer be so easily crossed.

NOOR: Some banks and financial institutions have threatened to leave Scotland if it cedes from the U.K., and opponents warn the country could face economic crisis.

UNIDENTIFIED VOTER: And the reason I’m voting no is ’cause I think the Union is better the way it is, because there’s various other companies that are wanting to leave Scotland if Scotland becomes independent, and I don’t think–personally, my own view is I don’t think Scotland will survive as an independent country. And the reason that is is because they’re going to put a 5 percent tax rise on your wages every month. There’s been [statuses (?)] about that, but your wages don’t go up. So that means, like, [incompr.] paying 20 percent, and that’s my insurance and tax every week. So [incompr.] paying twenty-two and a half percent every week, that’s twenty-two and a half percent of your wages gone. And as I said, the wages don’t go up. So there’s no point.

INTERVIEWER: Can you give us your reasons for voting yes?

GRANT SMITH, VOTER: Growing up in Scotland and then living in England for ten years I saw quite a big change, big difference, really, in coming home and getting a chance to be part of it and just a better future for our children, my child.

ALICE MCGENILY, VOTER: I think it’s a golden opportunity for Scotland to be independent. But it’s education I’m concerned about, whether it’s going to be best for rest to stay with the U.K. or to be an independent country.

INTERVIEWER: Could you expand on that a little?

MCGENILY: Yeah. I’m just worried that there’s going to be cuts, more cuts if we become independent, and whether it would be better just to stay with the U.K. for security.

NOOR: But some Scots feel pro-independence voices are being marginalized by the media. About 1,000 people rallied in front of the BBC’s Glasgow offices on Sunday, September 14. Here are some of their voices.

EVE BRADLEY, VOTER: We’re voting yes in the upcoming referendum. I’m a first-time voter. And I’ll be voting yes because I know too many people that have voted for a government and their vote hasn’t counted, and Scotland needs to be run by Scotland and not Westminster.

LAURA MCNEILL, VOTER: I’m going to be voting yes for Scottish independence, because I think that Scottish people have been suppressed for years and years and we don’t really have a voice in the way that our country is run at the moment.

ERIN BRADLEY-SCOTT, VOTER: I’m voting yes because I want Scotland to be run by the people of Scotland. I don’t want our big political decisions to be made in a foreign country–which, hopefully, will soon be a foreign country. And I’m with our Catalan brothers and sisters as well, because I lived in Barcelona for a while, and I know that they’ve got their head up against a brick wall, and the future for Catalonia’s not as bright as the future of Scotland, and I’m just really getting geared up for everything. I’m so energized by the positivity that’s surrounding the referendum. It’s definitely been a positive thing for Scotland. And it’s fantastic to see so many young people getting energized. And I wish we had the /ɪmˈpɛtju/ that the Catalans have got. It’s amazing just to see nearly 2 million people out in the streets. Here we’ve got a couple of thousand out to protest against the blatant bias of the BBC, which I think is atrocious.