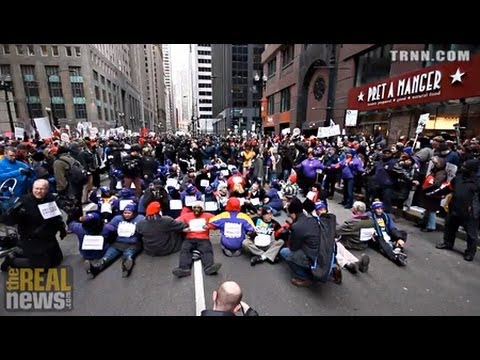 CROWD: Save our schools!

JAISAL NOOR, PRODUCER, TRNN: In Chicago, some 150 people were arrested on Wednesday, March 27, protesting plans to close 61 public schools, the largest such wave of school closures ever.

The city announced the plan last week, saying it was necessary to help bridge a billion-dollar budget deficit and to free resources to be invested in the city’s remaining schools.

At a news conference before the protest, Chicago Mayor Rahm Emmanuel publicly defended the plan. He said despite the plan’s unpopularity, it would improve the city’s schools, saying, quote, “When our educational system has unequal results, you cannot lock in the status quo,”

KAREN LEWIS, PRESIDENT, CHICAGO TEACHERS UNION: The message is this isn’t over. No matter what they think or what they believe, this is not over. There are a variety of ways to deal with this, but one of the most important ways is to motivate people to take responsibility for their own destinies. And that’s what this is about.

NOOR: And why direct action? Why civil disobedience?

NOOR: Thousands attended, and at least 150 sat down in the street, locked arms, and were detained and ticketed when they refused to move.

The Real News interviewed some of those who took part in the civil disobedience just before their arrest. Here are some of their voices.

KEITH BLUM, CHICAGO PUBLIC SCHOOL TEACHER: It’s important for us to fight here, because this is where this whole thing started, this whole reform movement. And if we don’t nip it in the bud here, it’s just going to go across the United States. And it’ll be a horrible, horrible experience for children and teachers and the society in general if this continues to make it across the United States. We have to break this.

EMILIA FORTUNADO, UNITE HERE!: My name’s Emilia Fortunado. I’m with UNITE HERE! We’re the union that represents the cafeteria workers to work in the schools. I’m out here because I don’t want to see the schools get shut down. I think this is a racist attack on our schools and, honestly, on black jobs in Chicago. The public sector is where black workers work, and our cafeteria workers are not going to let that happen. So that’s why we’re out here today.

UNIDENTIFIED: I’m [incompr.] I’m here for once for the kids, the teachers, the lunchroom managers, and us janitors. We all need our jobs. And they’re making it hard for kids to learn, ’cause how can they learn if they’re at a school where the only thing they can think about is getting back home?

NOOR: Reporting for The Real News, this is Jaisal Noor in Chicago.