Teachers, parents and activists to get arrested protesting the closing of 54 Chicago schools

Teachers, parents and activists to get arrested protesting the closing of 54 Chicago schools 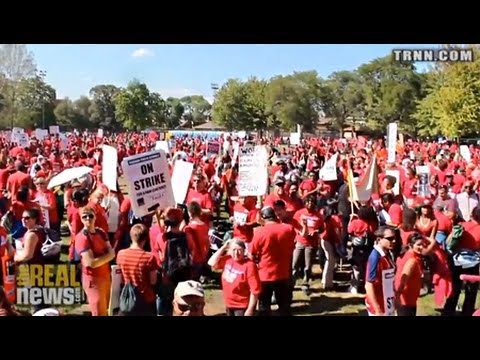 JAISAL NOOR, PRODUCER, TRNN: In Chicago, parents, teachers, and activists are planning a major act of civil disobedience Wednesday in opposition to plans to shutter an unprecedented number of public schools. Sources tell the Real News 150 people are prepared to be arrested at a major demonstration protesting the closings.

On Thursday, March 21, Chicago Public Schools unveiled its plan to shut 54 schools and consolidate another 11, the largest such closure ever in the country. About 30,000 of the city’s 400,000 public school students will be affected.

BARBARA BYRD-BENNETT, CEO, CHICAGO PUBLIC SCHOOLS: What we must do is to ensure that the resources that some kids get that all kids get. And those resources include libraries and access to technology and science labs and art classrooms. Every child in Chicago does not get that now. With our consolidations, we’re able to guarantee that our children will get what they need and what they deserve, and that parents will now walk into their child’s school and see their child engaged in a dance studio, see their child engaged in a science experiment, see their child with access to technology.

NOOR: The proposal will go before the Chicago board of education in May. It’s expected to be approved by the board, whose members are appointed by Chicago Mayor Rahm Emanuel.

On Monday, dozens of students with the group Students Organizing to Save our Schools marched and rallied at City Hall, calling for a moratorium on school closures, an elected school board, and for increased funding for education. Taking part was 14-year-old Harriet Beecher Stowe Elementary student Isis Hernandez. She says she opposes the school closings because it will put her fellow students in harm’s way in a city that had 500 homicides last year, many gang-related.

ISIS HERNANDEZ, STUDENT: Its going to create more violence. And if–I don’t want an iPad, I don’t want all that stuff if they can’t prove that I’m going to be safe while walking to school. And, yeah, I want this to be a safe neighborhood. There’s a lot of places in Chicago that already have violence, and this is just going to increase more violence in there, and we already have kids dying.

TORANCE SHORTER, CHICAGO PUBLIC SCHOOL PARENT: You’re putting these children in harm’s way. You’re potentially giving someone opportunity and aim to shoot these children down in the streets.

NOOR: Also opposing the plan is Torance Shorter, a parent of six public school students who serves on the local school council of Ryerson Elementary. The school serves mostly low-income African-American students and is among the schools slated for closure. Starting in the fall, students from nearby Laura Ward Elementary will start attending Ryerson. Beause they will be forced to cross Franklin Avenue, a gang boundary, many like Shorter fear this will lead to increased violence in the school and community.

SHORTER: You’re having them cross different gang territories without doing any kind of research. And then they get on public TV and say, well, it’s a signed, done deal now. Hey, your parents are going to have to figure that out. You’re not going to provide no bus service, no security service to make sure these kids get back and forth to home.

NOOR: Over 100 Chicago schools have already been closed in the past decade, a policy championed by former Chicago School Head Arne Duncan, who is now President Obama’s education secretary. But Ana Mercado, Director of Youth Organizing at Blocks Together, a group that has fought such closings for years, says she’s hopeful of this year’s city-wide mobilization to stop the school closings.

ANA MERCADO, BLOCKS TOGETHER: I think a big change is that people have started realizing that we have to be a united front on this, that it’s not just something that you get involved in when it’s your school, and that you’re going to have to do something more than just go through the official channels and beg and plead for them to listen to you. We’re going to have to actually do something big in order to make them listen.

NOOR: The Chicago Teachers Union has also come out strongly against the plan. Some see the closing as retaliation for last fall’s historic teacher’s strike. Teachers at closed schools will be fired from their jobs. The union’s members are among the 150 people from parent, community, labor, and religious groups planning on getting arrested at Wednesday’s demonstration.

Jackson Potter, staff coordinator of the Chicago Teachers Union, says such an escalation is necessary to hold the city accountable for its actions.

JACKSON POTTER, STAFF COORDINATOR, CHICAGO TEACHER UNION: If the powers that be won’t listen to the people who elect them and that they’re responsible to, and yet there’s clearly huge levels of opposition, then the only option is for people to make it very known, visibly, with the rights they possess, to express their dissent. And if that means, you know, marching on legislator offices, if that means, you know, occupying school buildings or, you know, other kinds of buildings, if that means getting arrested on the fifth floor of City Hall, then so be it. And if that means going on hunger strikes, [incompr.] long marches, none of those things are off the table.

NOOR: Check back at TheRealNews.com for coverage of Wednesday’s protest. From Chicago, this is Jaisal Noor.