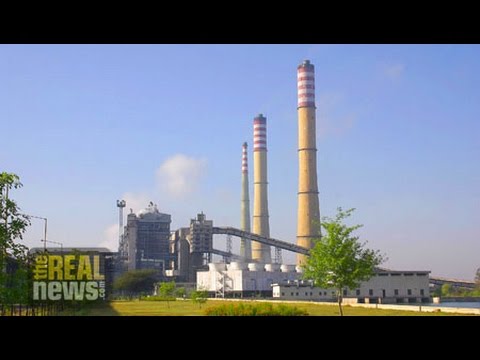 India is currently the world’s third-largest carbon emitter. With the UN climate negotiations in Paris just around the corner, it is one of the last countries to submit its plans to help stop climate change, partly because many developing countries are struggling to balance economic growth to achieving basic living standards for its population while trying to also lower CO2 emissions at the same time. Planning for sustainable growth and the cost of switching to renewable energy are some major factors faced by Indian policymakers. But a new study done by the Political Economy Research Institute at UMass Amherst appears to have some solutions. The study, done by Robert Pollin and Shouvik Chakraborty titled An Egalitarian Green Growth Program for India proposed some tangible solutions by examining the relationship between economic growth and climate stabilization.

Now joining me from Amherst is one of the authors of the study, Shouvik Chakraborty. He is a research fellow at PERI, that’s the Political Economy Research Institute. Shouvik, thank you so much for joining the Real News Network.

SHOUVIK CHAKRABORTY: Thank you for having me.

PERIES: So Shouvik, let’s just start with the basic premise of the study you did, and why you think this is a very good solution for India.

CHAKRABORTY: The main idea behind this study was actually to find out whether we can advance an economic policy framework through which the Indian economy can sustain a healthy trajectory growth [plot] over the next couple of decades so that it can through this [road plot] it can generate more employment, achieve energy security, and also like you said, reduce carbon emissions. Because it’s not only for the global thing, but also–like most of the health situation in India because of pollution is not good. Most of the cities like Delhi, Raipur, now were identified as one of the most polluting cities in the world.

So what we found was quite interesting. Our results show that if the Indian economy is assumed to grow at 6 percent per annum over the next 20 years, and it spends only like 1.5 percent of its gross domestic product on this clean energy program, then it would actually be able to generate jobs, and also along with it reduce emissions. It would act, from the business as usual model after 20 years one finds that it’s emitting almost half what the business as usual scenario would look like. Which is, like, almost–now India is presently emitting like, 1.5 metric tons per capita. And after 20 years also it will be at the same level. So you have an economy which is growing at 6 percent without contributing anything, without adding anything through these carbon reserves.

PERIES: Now, give us a sense of what policy guidelines are coming out of your study that is perhaps immediately implementable.

CHAKRABORTY: To put it very simply we are proposing to the Indian government to spend 1.5 percent additionally of its GDP on this program, out of which, like, 1 percent for creating capacities for renewable energy and 0.5 percent to achieve energy efficiency. So in terms of absolute numbers this comes in total to around $60 billion per year, out of which around $40 billion for generating capacities for renewable energy, and $20 billion for energy efficiency.

Actually, for the Indian case the very interesting scenario is that India can do a lot to achieve in terms of energy efficiency development.

PERIES: And in a recent interview we did with James Boyce in terms of the emissions in Delhi itself, it’s particularly schoolchildren so affected by the level of smog in the air. Obviously it is in the interest of Indian policymakers to ensure that the CO2 emission levels are reduced, and here your plan is proposing some very tangible ways in which it can dramatically reduce it. Give us a sense of the achievements that your recommendations can have on the Indian economy as well as in terms of people’s health.

CHAKRABORTY: The first major finding of the study is that not only in terms of emissions, like I told you earlier, that in terms of emissions, while the business-as-usual scenario is showing, like, up to 20 years, assuming a growth rate of 6 percent, we can, India will have a per capita emission level almost double the level it has today. What we are saying is that following our growth path, like spending 1.5 percent of its GDP, it can actually keep the emission level the same as it is today. So even that growth trajectory won’t have any impact on creating more emissions for the economy.

But secondly there is another very interesting finding. By following this goal trajectory, India can generate a lot of jobs in the economy. This can be a huge solution to its unemployment problem, also. Our study finds that if it does this program, assuming like it is spending 1.5 percent of its GDP, then it can actually create almost close to 7 million jobs in the very first year. And over the 20-year period, assuming a productivity growth rate that the laborers will learn by doing and also that India does not have a developed industry on this front. It might have to import some things from abroad, also. We find that in the 20-year period India can generate almost close to 20 million jobs, additional jobs in the economy.

PERIES: And also, given India’s rural base, this also according to your study has the possibility of very much stimulating jobs and lowering emissions in the rural areas of the country.

CHAKRABORTY: Exactly. And there is another third, very interesting point which is often missed, that in many of the rural areas electricity or energy is not accessible. Indian population, almost 30 percent of the Indian rural population does not have access to electricity, or any form of–most form of energy they have is a light, the [inaud.] and all this which they burn.

Now, one of the interesting findings of this study has been that through upgrade, renewable energy things like small hydro projects, building solar panels and all this, we can take electricity to those villages and to those households which will never have access to electricity, because on-grid electricity is simply cost prohibitive in those places.

PERIES: And in a hot country like India, solar energy seems to make perfect sense.

CHAKRABORTY: Absolutely. And in fact, also in terms of wind, because it has a huge coastal belt, like you said the solar energy especially in the rural areas and desert areas it might help regenerate a lot of electricity and energy. And this might actually help in other ways, and this is another point, that to reduce India’s dependence on energy from abroad. It can develop its own energy security. It can produce the energy on its own land.

PERIES: Shouvik, we’ll be putting a link to the study just below this interview, and I thank you so much for joining us today.

CHAKRABORTY: Thank you so much for having me.

PERIES: That was Shouvik Chakraborty from PERI, Political Economy Research Institute at Amherst, Massachusetts. And thank you for joining us on the Real News Network.