Despite Renewed Attacks, Israel No Closer to Defeating Palestinian Resistance

+972's Samer Badawi reports that Palestinians in the occupied West Bank and Gaza remain steadfast in their resistance of Israeli occupation, and UCLA's Gabriel Piterberg says that despite the escalating levels of violence, Israel is no closer to its goal of defeating Palestinian political and military resistance

+972's Samer Badawi reports that Palestinians in the occupied West Bank and Gaza remain steadfast in their resistance of Israeli occupation, and UCLA's Gabriel Piterberg says that despite the escalating levels of violence, Israel is no closer to its goal of defeating Palestinian political and military resistance 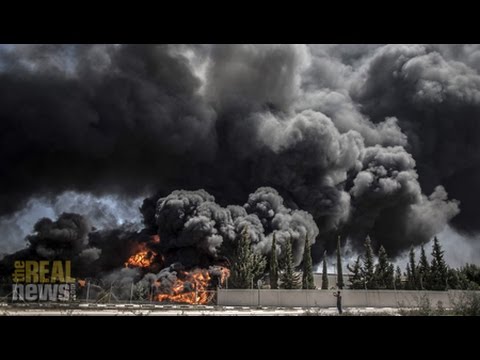 The cycle of violence is continuing in Israel and Palestine. In breaking news from Gaza, Hamas has said that in retaliation for an Israeli attempt to assassinate its military commander, it in turn will begin targeting airliners landing in Israel. According to the Israeli newspaper Haaretz, Hamas officials say an Israeli assassination attempt against Mohammed Deif, its military commander, has failed, instead taking the lives of his wife and infant child.

The latest truce in negotiations broke down Tuesday after both sides traded fire. This latest round of fighting has killed over 2,000 Palestinians, the majority civilians, and over 60 Israelis, the majority military.

Now joining us to discuss this are two guests.

We’re joined by Gabriel Piterberg. He’s a professor of history and director of the Center for Near Eastern Studies at UCLA. He writes and teaches on the Ottoman Empire, on settler colonialism and Zionism. He also writes for the New Left Review and The London Review of Books.

We’re also joined by Samer Badawi. He is a regular contributor to +972, a web magazine that is jointly owned by a group of journalists, bloggers, and photographers whose goal is to provide fresh, original on-the-ground reporting and analysis of events in Israel and Palestine.

PROF. GABRIEL PITERBERG, DIRECTOR, CENTER FOR NEAR EASTERN STUDIES, UCLA: You’re most welcome. It’s a pleasure to be with you.

NOOR: So, Gabriel, let’s start with you. Talk about this, the breakdown of talks on Tuesday, which led to this latest round of violence. What’s your response? And what led to this? Who is to blame, if you can blame one party?

PITERBERG: Well, the clear victimizer is the colonial occupier of the Palestinian territories, which is Israel. The large context is the conflict between a settler colonial movement and an indigenous national movement, and in a formation in which what is wanted from the indigenous population by the settlers is their land but not their labor. To make a big leap, what bothers the Israelis for over 100 years about the Palestinians is not their alleged terrorism or their culture; it’s their mere presence. They covet the land, not the people.

NOOR: And so the Israelis would say, look, we’ve withdrawn from Gaza since 2005. You know, Palestinians have been firing rockets. And therefore they need to eliminate Hamas militarily, and as a political force, really. Can this possibly succeed?

And it has to be made clear for the–I don’t know what, the umpteenth time, the disengagement is a propaganda ruse. Israel is the occupier of the Gaza Strip. It controls it and completely blockades it from the land, from the sea, and from the air. It can even determine how many calories Palestinian children will eat in their diet. So this is an occupation by different means. What they’ve removed is the illegal settlements. But the tight military and colonial occupation still goes on.

NOOR: And, Samer, you’re in Jerusalem right now. Give us your take on why these talks broke down and now Israel taking a play out of its old playbook and trying to assassinate a Hamas commander.

And I’d like to second, of course, the comments that were made earlier and remind your listeners that not only is Israel an occupying power, but it also displaced three-quarters of the Palestinian population, the indigenous population of Palestine, during its creation in 1948. And when you compare that with current refugee crises around the world, including that of Syria and Iraq, it is proportionately really an atrocious figure. In Syria at its worst we were talking about 10 percent of the population being displaced and made refugees. In Palestine, we were talking about quite literally 75 percent of the population. And so, from the get-go, as the professor has said, Israel’s intentions have always been to literally cleanse the land of its indigenous population. And the thing about Gaza that people need to remember is that it represents a microcosm of that attempt, in the sense that 80 percent of the people who lived there are either refugees themselves or descendents of refugees from 1948.

NOOR: And so you were just in Gaza. From what we have heard, the level of destruction is unprecedented is what was witnessed there in this more than month-long Israeli attack. Talk about why the Palestinians still have this heart to resist and to fight and to continue opposing Israeli efforts to, as you’ve described, force them to leave?

BADAWI: Well, I mean, the first and most obvious point to be made here is the Palestinians have nowhere to go. As the professor has pointed out, the land itself has been completely sealed off by land, by air, and by sea. And even if Palestinians were trying to run away from the fighting, they literally can go nowhere.

So what you have in terms of the humanitarian suffering that you mentioned in Gaza are scenes of half a million people who’ve been displaced from all up and down this 25-mile strip of land, from its northern tip to its southern tip, from areas that have been quite literally leveled to the ground, and seeking shelter in an area that is already one of the most densely populated on the planet. So, to put it simply, what the Israelis have done is pushed the Palestinians to the sea–the very same accusation that they have been leveling at the Arab world and at the Palestinians for the past 65 years they have done to the Palestinians in Gaza. So these half a million people, even if they were granted the respite and the calm of an extended ceasefire, have nowhere to go, because the United Nations itself has estimated that upwards of 100,000 homes have been destroyed all along Gaza’s eastern border.

When you add to that the fact that many of these people are already refugees themselves running away from refugee camps, it is quite astonishing. I was talking to somebody at the United Nations when I was still in Gaza, and one of the quite stark sort of debates that they’ve been having lately is: what do you call somebody who has been displaced from a refugee camp? I mean, we have–those of us who work in the international law world and international human rights know that there is such a thing as an IDP, or an internally displaced person. There is also such a thing as a refugee. But what you have in Gaza is this incredible situation where you have refugees who have become IDPs in their own land.

So when you look at the situation in total, it is really utter lunacy, what the Israelis have done in Gaza. And with Netanyahu’s most recent escalation, as you’ve noted, through the targeted assassinations of the very people who stand a chance of resolving this conflict with him, it really makes no sense, what the Israelis hope to accomplish, and I see no endgame here other than continued killing and continued suffering on the part of Palestinians.

NOOR: Professor Piterberg, where would you put this current moment in the Palestinian-Israeli conflict in historical context? Because, as a casual observer might say, they’ve been going back and forth with these ceasefires, these truces and rounds of violence with escalating levels of casualties and destruction. Where can they possibly go from here?

PITERBERG: Well, let me put this, as you asked me to do, in context. For reasons that I won’t go into in this particular interview, the Israelis have not managed to completely ethnically cleanse Palestinians from Palestine. Short of achieving that, what they’re trying to do is what the late Israeli sociologist Baruch Kimmerling called “politicide”. In other words, they are trying to inflict such exhaustion, damage, oppression, and rules and regulations on the Palestinians that they’ll become so fragmented and basically exhausted that they will not constitute a political community, a community that is able to lay claim to sovereignty even on a fraction of Palestine. That’s their basic goal, because that’s the maximum they can achieve. And for the time being, they are achieving it.

Specifically on Gaza, I can quote the chilling euphemism of Israeli generals and officials, who call their by now cyclical operation in Gaza “mowing the lawn”. In other words, from time to time, they go there, cause havoc and destruction and massive killing, and it repeats itself every two or three years. That’s the “mowing the lawn”. But, in generalizing, what they want to achieve is bring the Palestinian society in both the West Bank and the Gaza Strip, and also the Palestinian-Israeli citizens, to such a level of fragmentation and exhaustion that they will not be able to be a collective with any political claim of one sort or the other, of one solution or the other, in historical Palestine. That’s the basic purpose, I think.

NOOR: And, Samer, we’ll give you the last word. You were just in Gaza. You’re in Jerusalem now. Is Israel any closer to achieving its goal of crushing all political opposition?

BADAWI: I mean, I would agree with the professor that that is the goal and has been for some time now. But what I’ve observed among Palestinians in Jerusalem and in the West Bank–I should mention that I was not simply in Ramallah, but also in the northern part of the West Bank. And what I’ve observed and what I’ve heard from people repeatedly is a sense of determination, a sense of solidarity, and a sense of national purpose that, although it lacks the tactical depth right now to accomplish what is needed for a liberation movement, certainly continues to share a common strategic vision. And so I think that once Palestinians are able to get back to the aims of the reconciliation agreement that was forged in April of this year and are able to have elections at the PLO level, that there really is a chance for Palestinians to set down that strategic vision and to work together to be able to confront the Israeli occupation in a meaningful way.

NOOR: Well, I want to thank you both for joining us.

PITERBERG: Thank you very much.

Samer Badawi is a regular contributor to +972, a web magazine that is jointly owned by a group of journalists, bloggers and photographers whose goal is to provide fresh, original, on-the-ground reporting and analysis of events in Israel and Palestine. Previously, he served as Executive Director of United Palestinian Appeal and a director at the…

Gabriel Piterberg is a professor of history and director of G.E. von Grunebaum Center for Near East Studies. He writes and teaches on the Ottoman Empire, and on settler colonialism and Zionism. Piterberg writes for New Left Review and London Review of Books. Piterberg published, among other things, An Ottoman Tragedy (2003) and The Returns…