Paul Jay and host Ben Norton discuss how by destroying legitimate opposition movements, the Saudi royals created a vacuum the was filled by al Qaeda and other extreme Islamist forces

Paul Jay and host Ben Norton discuss how by destroying legitimate opposition movements, the Saudi royals created a vacuum the was filled by al Qaeda and other extreme Islamist forces 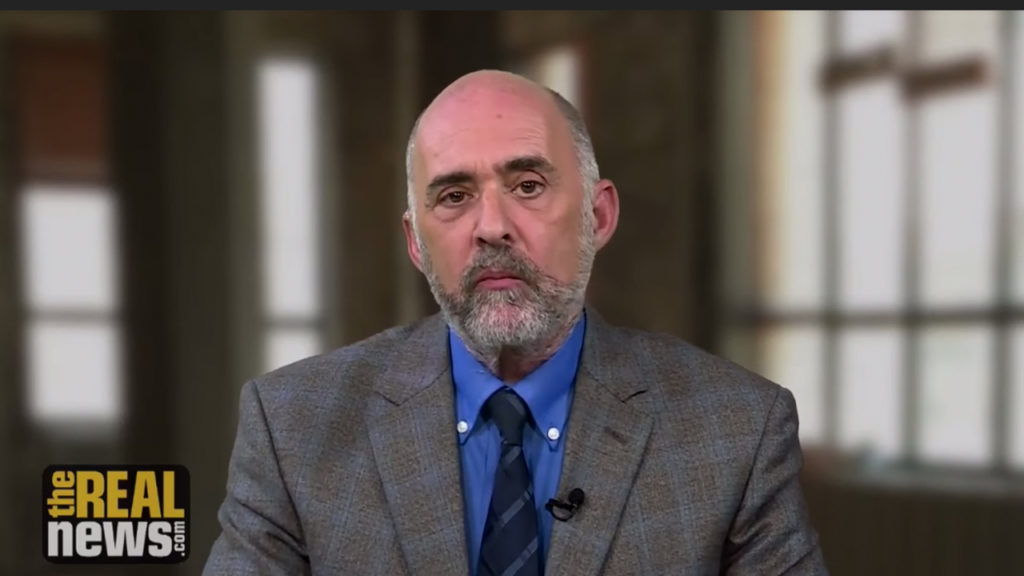 BEN NORTON: So much of the media coverage we do see of Saudi Arabia is contextless. There is no historical understanding of the decades-long role that Saudi Arabia has played in, like you said, bolstering U.S. interests, fighting forms of progressive nationalism and communism in the Middle East. Of course, you mentioned Abdel Nasser in Egypt, who was an avowed enemy. You mention Eisenhower; Eisenhower, in fact, himself, according to White House notes, he also said that the U.S. must stress the holy war aspect, is how he put it. And of course, the Saudis played a key role in that, in supporting right-wing forms of political Islam, of Islamism, throughout the region and against communism, of course. So before we-

PAUL JAY: Ben, let me just add a point to what you’re saying. And this is very critical, because we’re told, you know, you listen to CNN and everybody talking about the ‘special relationship,’ and while the Crown Prince Mohammed bin Salman should be rebuked; even some people calling for him to step down. But the basic strategic relationship of the United States and the Saudis we’re told we can’t live without. And one of the reasons is because it’s said, what’s the alternative to the Saudis? It’s going to be some kind of al Qaeda extremist forces.

Well, of course, this is filled with irony, given how much the Saudi royal family has nurtured al Qaeda extremist forces. But the part- and that does get talked about a little bit in mainstream media. But the part that doesn’t get talked about is that what the Sauds did internally in Saudi Arabia, and their influence throughout the region, is they crushed the secular progressive opposition. The trade union movement, which was very active Saudi Arabia in the ‘50s, into the ‘60s. There were oil worker strikes. There was a real progressive- somewhat religious. It could be secular, but it wasn’t Wahhabist. It wasn’t fanatical.

The reason the choice is between Saudi royal fanaticism, and you could say even worse, except it’s a bastard child of the same people, al Qaeda-type fanaticism, is because they killed so much of the more legitimate, democratic opposition in Saudi Arabia. They crushed the Shiite in Saudi Arabia, the very significant segment of the population, who have aspirations for a more democratic country, because they’re crushed by this Sunni dictatorship.

Again, none of this is in the interests of the American people. This issue of converging, you know, our national security- this isn’t a national security question. The only reason there’s threats to American people’s security is because the United States has done so much damage to the peoples of the region in the Middle East. It’s created such hatred, such resentment. One of the most important things has been the support for the Saudi royal family. It’s one of the things that’s angered people the most. The real threat to ordinary Americans’ national security is a continuation of this crazy support for such murderous dictators.

BEN NORTON: Absolutely. And on the issue of Mohammed bin Salman, what’s interesting is the idea that Mohammed bin Salman, the young 30-something crown prince who is being portrayed by corporate media outlets as the savior of Saudi Arabia, that is not necessarily a new narrative. And I do want to get to that and ask you some questions about that.

But before we move away from the historical context here, I think it’s also important to remember, as you were just stressing, Saudi Arabia has a long history of crushing these movements that continues to today. So still today there is a pro-democracy movement in Saudi Arabia. It has largely been crushed, as you acknowledge. But there are still human rights activists, pro-democracy activists in prison, especially in the eastern part of Saudi Arabia, in what’s called Qatif. And inside the Qatif region, which also happens to be a majority Shia community that has the largest oil reserves in the entire country, in the town of Al-Awamiyah, which is a major town in Qatif that’s a Shia-majority town, large parts of it were razed to the ground by the Saudi regime in the past year using U.S. weapons, Canadian armored vehicles, with support from the UK, as well. And they’re killing and imprisoning pro-democracy activists, many of whom are Shia. But they’re not Shia that are trying to impose a Shia Islamic state. They happen to be Shia and they’re a minority group that is oppressed, and are fighting for equal and democratic rights. And leaders like Sheikh Nimr-Nimr, who was executed in 2016 on January 2, beheaded for this peaceful, pro-democracy activism.