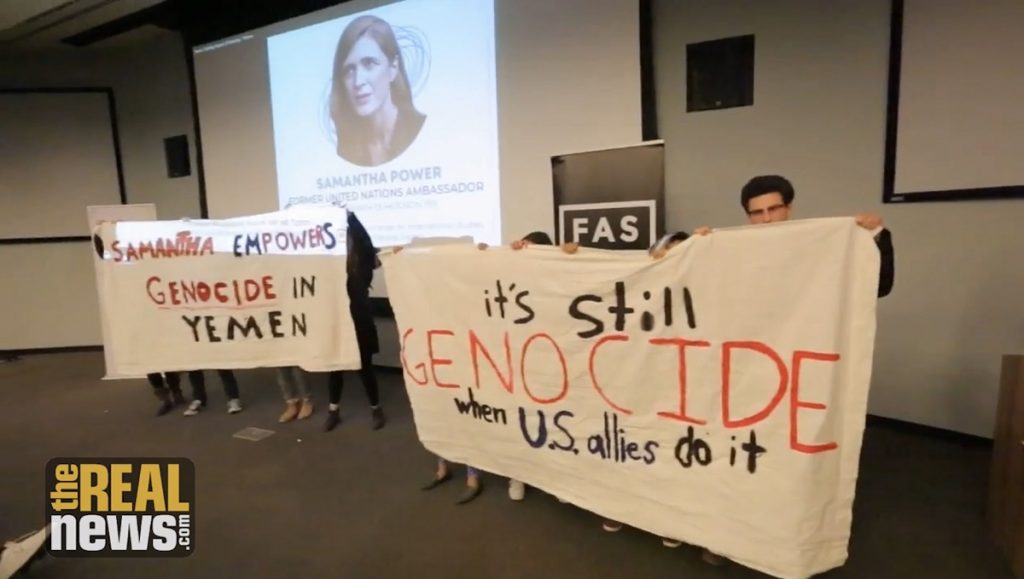 BEN NORTON: As the catastrophic joint U.S.-Saudi war on Yemen escalates under the administration of President Donald Trump, activists around the country are challenging the politicians who have fueled it.

Power is a notorious liberal war hawk who, as a top official in the Barack Obama administration, spent nearly two years defending Saudi Arabia while it was committing war crimes in Yemen, relentlessly bombing civilian areas with weapons, fuel, and intelligence provided by the United States.

Anti-war activists at protested at a speech Power gave on March 13, holding up banners reading “Samantha empowers genocide in Yemen” and “it’s still genocide when U.S. allies do it.”

The action was organized by Students for a Democratic Society, or SDS. The Real News spoke with Emeline Armitage, the co-president of Johns Hopkins SDS.

EMELINE ARMITAGE: To us it is really important to point out that what’s going on in Yemen is ongoing. And a lot of people at the event, even with the huge education opportunity, even students that are educated about the Middle East, have no idea what’s going on in Yemen and what the U.S. is supporting, because mainstream media isn’t reporting on it.

So in that case, that’s the most important takeaway. It’s not about us; it’s not about Hopkins; it’s not even about Samantha Power. It’s about recognizing what the United States is not just doing in Yemen but across the globe, and trying to combat it in whatever small ways we can.

So in the future we would love to do more anti-imperialist work and demilitarization work around Hopkins, around the bombs that we’re building, and also reach out to any coalitions that we can in order to fight what’s going on.

BEN NORTON: Saudi Arabia launched a bombing campaign in Yemen in March 2015, in an attempt to force the rebel Houthi movement out of power. Over three years, the Saudi monarchy has carried out tens of thousands of airstrikes, killing thousands of Yemeni civilians, with direct assistance from the U.S. and Britain.

This war has devastated the health system in Yemen, the poorest country in the Middle East, unleashing the largest humanitarian crisis on Earth, and the biggest cholera epidemic on record.

While Saudi Arabia was committing some of its most egregious crimes, it enjoyed support from the Obama administration and its UN ambassador. Samantha Power quietly backed the war on Yemen, and refused to publicly criticize Saudi Arabia.

Since leaving office, Power has come around and admitted that it is “wrong … to keep supporting [the] Saudi-led coalition as it kills civilians with impunity and blocks medicine, food, [and] fuel supplies in face of looming famine.”

Power’s former top spokesperson, on the other hand, is still lobbying against peace activists.

As a student in the international studies program, which sponsored Samantha Power’s talk, Emeline criticized how U.S. military intervention is normalized in university programs.

EMELINE ARMITAGE: I’m a part of the international studies program, and I think it’s important to critique it, because a lot of the other students in the program have internships with the CIA, have internships with the Department of Defense, kind of want to rise up the ranks of the United States military-industrial complex or intelligence-industrial complex. And therefore they can get very uncomfortable when you kind of point out these moral lapses in what they think that they want to do and what’s actually going on.

And this event was sponsored by the department at Hopkins, in addition to a student group of students across the university, so I think students get really, really uncomfortable you point out like, “Hey, this is, we’re kind of pointing out the flaws in the career that you want to aspire to.”

BEN NORTON: Emeline also spoke of how some academic institutions have merged with the U.S. military-industrial complex, and how student activists are challenging the militarization of higher education.

EMELINE ARMITAGE: Our university has a laboratory called the Applied Physics Lab, where they actually manufacture a lot of drones, manufacture parts for nuclear weapons. So we’ve done some actions around that. Trying to disrupt recruitment events, so when the CIA recruits here, we’ll go and we’ll hand out flyers, or when the Applied Physics Lab, we’ll try to disrupt that in some way and hand out flyers.

BEN NORTON: While they may have been heckled a bit during their protest, the SDS co-president said the student activists have received support from people not just on their campus, but inside Yemen as well.