Many ISIS fighters retreated from Mosul prior to the current military campaign, and therefore the existence of organization is not threatened by the ongoing campaign, says Sabah Alnasseri

Many ISIS fighters retreated from Mosul prior to the current military campaign, and therefore the existence of organization is not threatened by the ongoing campaign, says Sabah Alnasseri 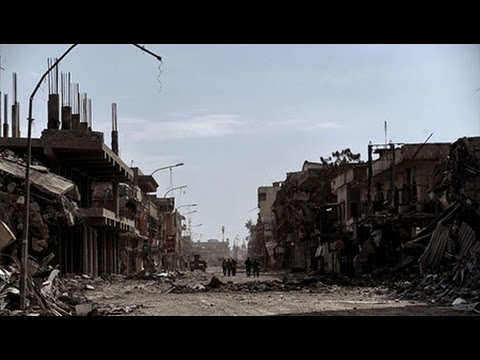 Iraqi troops alongside U.S. logistical support took over the last remaining road leading to western Mosul on Wednesday. The fight against ISIS in Iraq’s second largest city has been particularly intense as the Iraqi military prepares to push ISIS out of western Mosul.

The UN Office for Humanitarian Affairs estimates that about 46,000 residents fled Mosul between February 19th and March 7th. This was the largest number since the fighting began in Mosul last October. Until now, about 250,000 residents have been displaced. It is estimated that another 750,000 remain in the western half of the city, where the humanitarian situation is extremely dire.

Joining us now to assess the latest developments in the effort to retake Mosul is Sabah Alnasseri. Sabah is a professor in political science at York University, in Toronto. His latest publication is Arab Revolutions and Beyond: The Middle East and Reverberations in the Americas.

Thank you so much for joining us, Sabah.

SABAH ALNASSERI: Good to be with you, Sharmini.

SHARMINI PERIES: Sabah, reports indicate that the fight to retake Mosul from ISIS is entering a new phase. Now, ISIS has been pushed out of the eastern part of the city. It is expected that taking over the western half, however, of the city, might be more difficult. Sunnis live there who might support ISIS, and because ISIS fighters are almost completely surrounded here, and they have nowhere to go. People might try to protect them. What is your assessment?

SABAH ALNASSERI: Yeah, that’s true. The Iraqi army with the Kurdish Peshmerga and the anti-terror forces, the tribal forces, Shiite militias and so on, after almost cleansing the eastern part of Mosul, they moved to the western part of the city. Because this is where the majority of ISIL fighters actually are situated, because it’s at the center of the caliphate, the capital of the Caliphate.

One correction here, and the question, not the Sunni population in Mosul would probably support ISIS. This is not true. The population in Mosul are taken hostage by ISIL fighters, and they can barely move because of all the mines and shooting and explosive devices and so on. So, their lives are at risk. They are not supporting ISIS, but to suggest that the population in Mosul, because they are Sunni, and somehow would support ISIS, is wrong. I think this sectarian discourse is one of the problems we have.

SHARMINI PERIES: So, then who might be supporting ISIS? Are there ISIS supporters in the civilian population there?

But the problem is, not so much the civilian population as human shields, as ISIS in the eastern part of Mosul, which is the historical part of the city. A very narrow, tight space and neighborhoods, they have developed over the last almost three years, since 2014, when they occupied Mosul, a complex maneuvering system, tunnel system, throughout the city, where they can maneuver and wage surprise attacks against the Iraqi army and so on. That’s why the battle in the eastern part will be much more difficult and a war of attrition and will take longer than the fight in the eastern part of the city.

SHARMINI PERIES: Right. Sabah, in the last few weeks, there’s been so much of an exodus out of Mosul. Now, what are the current conditions? It must be really dire and unlivable.

SABAH ALNASSERI: Absolutely. As you mentioned, Sharmini, more than 250,000 people fled the city since October last year. The problem is, all aid organizations are overwhelmed by this huge number of displaced population. They cannot accommodate them. So, there’s a bad situation in and outside of Mosul. And the second thing is within the city itself and the western, eastern part of the city, they’re right in the city defeating ISIS would mean, just like in Fallujah and Ramadi, that we will have ghost cities, ruined cities. All the whole infrastructures are destroyed.

So, people are living – I was reading a report the other day – that a lot of families were living on rotten bread for days because they have nothing to eat. And since they cannot feed the city because of the bombing and being caught in between ISIL fighters and the Iraqi army, so we don’t know how many people are injured. We don’t know how many are killed, because there is no civilian body count. Neither the Iraqis nor the U.S. do civilian body counts. They do only body counts for ISIL fighters to suggest how victorious that this battle is, and the cover up all other atrocities.

So, the situation is very difficult to estimate. Only after the fact, when ISIS is driven out of Mosul, we will really see the scope of the destruction and the disaster that people went through all these months.

SHARMINI PERIES: Right. Now, when it comes to a situation like this, it’s hard to talk about “victories”. I mean, there are no victories where people are suffering at this level. But do you think if the U.S. and the Iraqis succeed in pushing ISIS out of western Mosul, which could still take several months I think, would this be the end of ISIS when it comes to the region?

SABAH ALNASSERI: I don’t think so. I don’t think so. I mean, a lot of ISIS fighters left the city already even before the battle started. Their tunnel system enabled them to flee the city and go maybe to Syria or other villages outside of Mosul, to regroup and attack again. You know, just today I was reading that in Kabul ISIL fighter, you know, I think it was a suicide bomber killed 50 people in the Kabul military hospital. But they are dispersing their fight in Egypt and in Afghanistan or in other parts, in Syria, for instance.

SHARMINI PERIES: All right. And then, turning towards the west here, in the United States. President Trump recently reissued a new ban, a new travel ban but, this time around, he has left out Iraq from the list, but Iran, Somalia, Sudan, Yemen, Syria and Libya are still on the list. Now, this was interesting that Iraq was on the list in the first place given the war in Iraq and the Iraqis, and the Americans have been fighting side by side in Iraq. So, this was questionable in the first place. But why do you think this time around it was left out of the list?

And Trump threatening to freeze all these assets to cover some costs of the war. Now, what he realized from his generals, especially Mad Dog and Iraq that, if he keeps Iraq on the list and Iraqis are not allowed to enter the United States and allow them to collaborate with the U.S. Army as translators, et cetera, that means this will complicate the war against ISIL and it will turn the episode in Iraq against the United States and against the U.S. Army. So, that means the U.S. Army generals, advisors, consultants, trainers, et cetera, their lives will be in danger.

So, I think he realized what a huge mistake he committed in the first place and put Iraq on the list. But still the list is still actually a Muslim ban. He can define it as he wishes. It is a Muslim ban.

SHARMINI PERIES: All right, Sabah. I thank you so much for joining us today. There’s much more to talk about, and looking forward to you joining us again very soon. Thank you.

SABAH ALNASSERI: Good to be with you, Sharmini. Thanks for having me.

Sabah Alnasseri was born in Basra, Iraq, and earned his doctorate at the Johann-Wolfgang Goethe University in Frankfurt, Germany. He teaches Middle East politics and economy at the Political Science Department at York University in Toronto, Canada. His publications cover various topics in Marxist political economy, Marxist state theory in the tradition of Gramsci, Poulantzas…

Who’s Behind the Attacks in Sri Lanka?