Iraq events moving out of US control

Sabah al-Nasseri: "They are instrumentalizing the internal resistance within the Iraqi Parliament, within the Iraqi societies, against the United States, against the presence of US troops in Iraq, and so on, to actually negotiate new deals concerning securities agreement, oil agreement, etcetera, by saying, "Look, we cannot signs all of these kind of agreements. Otherwise we'll commit political suicide."

Sabah al-Nasseri: "They are instrumentalizing the internal resistance within the Iraqi Parliament, within the Iraqi societies, against the United States, against the presence of US troops in Iraq, and so on, to actually negotiate new deals concerning securities agreement, oil agreement, etcetera, by saying, "Look, we cannot signs all of these kind of agreements. Otherwise we'll commit political suicide."

Iraq events moving out of US control 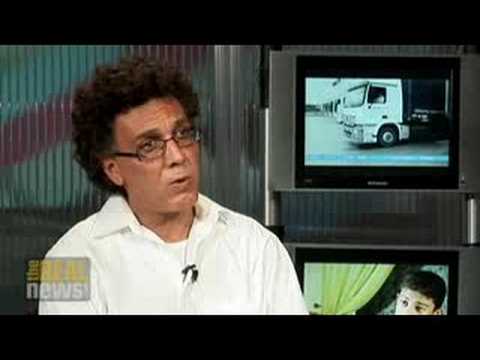 CARLO BASILONE (VOICEOVER): In an interview with the German magazine Der Spiegel published on the weekend, Iraqi Prime Minister Nouri al-Maliki said about moving US troops from Iraq, "Barack Obama talks about sixteen months . . .. That, we think, would be the right timeframe for a withdrawal with the possibility of slight changes." He added, "Those who operate on the premise of short time periods in Iraq today are being more realistic . . .. Artificially prolonging the tenure of US troops in Iraq would cause problems." (July 20, 2008) This reiterated calls for a definite timetable for withdrawal made two weeks ago by al-Maliki and the Iraqi National Security Advisor Mowaffak al-Rubaie. Iraq’s top Shiite cleric, Grand Ayatollah Ali al-Sistani, has also called for a pullout and opposes a long-term security pact with the United States. In a dramatic shift from he previous insistent refusal to talk about any kind of deadline or timetable, President Bush, after a videoconference meeting with the Iraqi prime minister on Thursday, agreed to "a general time horizon" for bringing more US troops home. Democratic presidential hopeful, Senator Barack Obama, has said that he wants most US combat troops out of Iraq by mid-2010, and is not in favor of permanent US military bases there, but says he will leave a residual force in Iraq for an unspecified amount of time. Republican John McCain, who has always favored a long-term presence, restated that any withdrawal must be conditions-based and that the troops would come home with victory and not through a set timetable. But how serious are al-Maliki’s statements about withdrawal of all US forces? What does John McCain really mean when he says "no withdrawal without victory"? And how big is Barack Obama’s residual force, and how ambiguous its mission? The Real News senior editor Paul Jay spoke with Iraqi-born Sabah al-Nasseri, professor of political science, Middle East politics, at York University in Toronto.

PAUL JAY, SENIOR EDITOR: Sabah, the situation in Iraq is perhaps not what we would have expected two years ago, three years ago. The predictions that, if the Americans were to withdraw, there would be a massive civil war and bloodbath appears not to be something that might happen. The oil contracts that look like a locked-in sweetheart deal for American oil companies are maybe not quite so locked in. Now, looks like there will be more of an open bidding process, although we still haven’t seen the oil legislation. The oil minister says there could be $100 billion of revenue flowing through the Iraqi government within a year. This situation is different. Maliki has called for a timetable of American withdrawal. The American administration for some time has been saying Iraqis must stand up. Is this a bit of a situation of be careful what you wish for? Maybe this administration doesn’t quite look at what’s standing up.

PROF. SABAH AL-NASSERI, POLITICAL SCIENCE, YORK UNIVERSITY: Okay. Two things I would say. About the horror scenario—civil war, sectarian war, and etcetera—it was part of this threat scenario. It was constructed last year or the year before to suggest there is a civil war, sectarian war in Iraq. There was never civil war, sectarian war in Iraq. And all the Iraqi knew, if the US troop would withdraw, there will be no civil or sectarian war. You will have violence, of course, internal violence, but they knew they could control this kind of violence. So it was part of this scenario. Now what we are witnessing, actually, what the Iraqis are capable of doing without the US mission or without US troops, without US expertise, and so on. So the thing is, right from the beginning, there was this black scenario, horror scenario that without the US troops in Iraq the whole country will be in chaos and violence, etcetera. This is the first part. The second part is, as you know, the Iraqi government is not a puppet regime of the United States. They have their own agenda. And I was arguing with a class project. So that means they are instrumentalizing the internal resistance within the Iraqi Parliament, within the Iraqi societies, against the United States, against the presence of US troops in Iraq, and so on, to actually negotiate new deals concerning securities agreement, oil agreement, etcetera, by saying, "Look, we cannot signs all of these kind of agreements; otherwise we’ll commit political suicide." So they tried to maneuver, to use the internal resistance within Iraq like a card to achieve more political capital within Iraq, actually—think about the next election in October—to win more credibility and legitimacy within the Iraqi societies vis-à-vis the United States.

JAY: Let me play you a little clip. Patrick Cockburn spoke recently on a panel at Frontline, and here’s what he said.

PATRICK COCKBURN, JOURNALIST: About Obama and McCain is that they both haven’t learned [inaudible]—what seems to me the main thing that comes out of Iraq over the last five years is they both assume that America can decide what’s going to happen in Iraq, that they make the political weather in Iraq. But this simply isn’t true. If, for instance, McCain, whether it’s Senator McCain or President McCain, decides to stay forever, but let’s say somebody goes to a small alleyway near Najaf and goes and consults with the grand ayatollah, Ali al-Sistani, who says, "No. The occupation must end," then the occupation will end. These people don’t have the power to do it anymore.

So is Cockburn right? Is this process really unraveling out of American control?

AL-NASSERI: Exactly. I was arguing years ago that the United States is not capable of controlling the situation in Iraq. The situation is out of their control—years ago, not only today. So it’s basically [inaudible]. They cannot control the situation. So they’re trying to do the best they can to get kind of agreement with the Iraqi government with this government, because they are not sure what kind of a government we will have, probably, next year, etcetera. So they want to make sure that they will have current deal with this government concerning the US military bases and the presence of US troops in Iraq and the oil concession. And they know they cannot push the old agenda they had before, like signing a security agreement on the long run, keeping the US military bases permanently in Iraq, getting hold of the Iraqi oil, etcetera. They can’t do this. And, as I said, the Iraqi government instrumentalizing the resistance within Iraq against the US.

JAY: we’re hearing that the Iraqi government was even talking about something like 2010 as the date they want US troops out. This does not jive, certainly, with John McCain’s plan for Iran, but it really doesn’t jive with Obama’s plan, either, about a residual force. Is the US really willing, capable of giving up this control? And do they have any choice?

AL-NASSERI: Well, my argument is the Iraqi government realized the last few weeks they cannot actually sign a security agreement with the United States. They have enormous resistance even within not only the Parliament, but within the executive itself and outside the Parliament. So they cannot sign an agreement. Sistani declared a few weeks ago he is against signing a security agreement with the United States, etcetera. So the Iraqi government actually can’t sign this kind of agreement. So what they are trying to do now is to construct a so-called memorandum of understanding, a short-term security agreement until 2010, by saying, "We will sign this with the United States if the United States would accept our demands for withdrawals or timetable for withdrawal of the troops, then we’ll sign this memorandum of understanding." But now you have a conflict within the Iraqis. Some of them are saying, well, the UN mandate will end December 2008, and all foreign troops should leave Iraq. Why do we need memorandum of understanding? It means nothing but keeping the US troops beyond the end of the UN mandate. Actually, you’re extending the presence of the US troops in Iraq.

JAY: And there’s another important date coming up. It’s planned in October. Whether it happens, we will see. It’s provincial elections, which will be very influential. And there is the question on the horizon: who will be running the Iraqi government if and when the Americans leave? So in the next part of our interview, let’s talk about who is in power in Iraq and who might be in power after the next elections? Please join us for the next segment of our interview with Sabah al-Nasseri.

Sabah Alnasseri was born in Basra, Iraq, and earned his doctorate at the Johann-Wolfgang Goethe University in Frankfurt, Germany. He teaches Middle East politics and economy at the Political Science Department at York University in Toronto, Canada. His publications cover various topics in Marxist political economy, Marxist state theory in the tradition of Gramsci, Poulantzas…