Is the European Right Exploiting the Refugee Crisis?

Ruth Wodak, co-author of Right-Wing Populism in Europe: Politics and Discourse, says many parties across Europe are appealing to voters through nationalistic, anti-immigrant and anti-Muslim rhetoric

Ruth Wodak, co-author of Right-Wing Populism in Europe: Politics and Discourse, says many parties across Europe are appealing to voters through nationalistic, anti-immigrant and anti-Muslim rhetoric 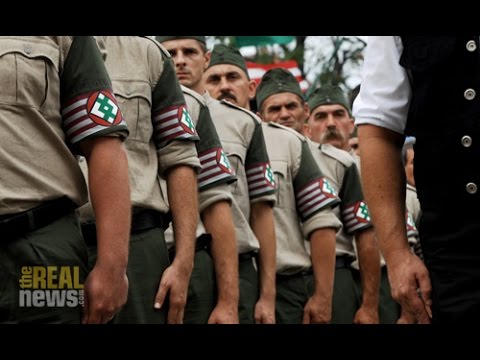 There is nothing like a growing population of refugees on the coast of Europe combined with the economic downturn that can give way to rise of right-wing populism in Europe. Our next guest, Prof. Ruth Wodak, has just co-edited a book on the topic titled Right-Wing Populism Across Europe: Discourse and Politics. Ruth Wodak is a Distinguished Research Professor of discourse studies at Lancaster University. Prof. Wodak, thank you so much for joining us today.

PERIES: Prof. Wodak, with the recent economic downturn in Europe, and particularly in places like Greece where there is a growing national debt and an influx of refugees daily, this–obviously, we were just recently in Greece. We really see the rise of the Golden Dawn party as we see in Hungary the growing popularity with Jobbik party. It seems that these parties have been emboldened by these two crises, and I want to get your initial thoughts on this kind of a climate and what gives way to the rise of the right.

WODAK: Well, certainly the economic crisis actually since 2008, the financial crisis and the eurozone crisis have played a big role in countries where youth unemployment, for example, has risen to 50 or more percent. That’s the case in Spain, in Portugal, in Greece, a bit less in Italy. So the south of Europe has been particularly struck by this economic crisis. But actually it hasn’t triggered such strong right-wing populist movements or extreme right-wing movements everywhere. So I think it’s basically not only the financial crisis which can be blamed for this rise of the right wing.

Actually, in some very rich European countries like Austria where I live, or Switzerland which is neighboring, or even Denmark, the right wing populist parties are even bigger than in Greece or in Hungary, although the crisis, the economic crisis, has never struck these countries in the same way.

PERIES: Why is that?

WODAK: That is the case because there are other important factors to be considered. For example, Austria has, as well as Switzerland and Denmark, quite small countries. They’re very concerned about their national identities, and it’s sort of a turn back from internationalism to some kind of very chauvinistic nationalism. So there is a revival of nationalism in these countries which these parties employ and functionalize to their ends.

Just to give you an example, the biggest right-wing populist party for many years was in Switzerland. Now, they have split, but the Schweizerische Volkspartei had over 40 percent and was part of the government. And the Austrian Freedom Party, which is actually a successor party to the Nazi party, is currently up to 30 percent. And the, as you might know, in Denmark the right-wing populist party also gained a lot of votes.

So it’s not only the economic crisis which is the case that, say, in Greece obviously. But it’s also big issues about insecurity, about anti-EU skeptics, and basically the major issue is immigration. So it’s anti-immigration, specifically anti-Muslim. And that has been the recurring theme, for example, also in the Netherlands where you have the Vrijheid Partij, which only focuses anti-Muslim rhetoric.

PERIES: Prof. Wodak, you must have seen that horrible social media footage of this Hungarian journalist kicking and attacking refugees, particularly attacking children. I was wondering what your thoughts are on that.

WODAK: Well, basically first of all it’s awful. And really, really dismaying, specifically because I think this person was a reporter, so she was a media person. And basically that displays or manifests that in Hungary there is a specific huge xenophobia which is also not new. Hungary has a long tradition of being extraordinarily anti-Roma and also antisemitic. They have a fascist past in the ’30s and also during the World War II. And the Jobbik party, but also Fidesz, the ruling party, sort of linked to these pasts and also to the anti-minority, anti-Roma, antisemitic, anti-migrant sentiments.

One of the Hungarian state secretaries was on Austrian television on Sunday, and basically he, the gist was, we just don’t want them. Then he also claimed that these were not only refugees, only about 30 percent maximum were refugees. The others were illegal migrants. As if–and we all know that’s not the case. Most of the refugees come from Syria, and they come from countries where there are ongoing wars.

PERIES: And it’s not just countries like Hungary. Even, I notice in one of your articles, you cited the fact that the reaction of the home minister in the UK had a similar effect in England.

WODAK: Well, that is one of the worrying aspects. I mean, you can’t compare sort of the rhetoric of the UK with the Hungarian rhetoric directly. But you do see a strong what I call normalization of this exclusionary, discriminatory rhetoric. So mainstream parties like the Tories in England and other mainstream conservative parties jump on the wagon because they’re afraid to lose their voters. And so they accommodate to this sort of nationalistic, we have to protect our country from, quote-unquote, these masses coming in, these tsunamis, and all these metaphors which are being used, because they think they will keep their voters who would otherwise possibly vote, in the UK, vote UKIP.

PERIES: Prof. Wodak, we’ve had some interesting alternative responses from places like Germany, that has decided to accept some 8,000 refugees, and also where the rise of the right, or at least the existence of right-wing popular parties, extreme ones like the Nazi party, is actually prohibited. Tell us more about this particular situation of Germany.

WODAK: Well, Germany is a very interesting case in point. Chancellor Merkel has really displayed extraordinary openness now and courage in embracing the refugees and opening the borders, as has Austria, I would like to emphasize, so that thousands of refugees who have made it to the border of Hungary and Austria were finally welcomed in Austria, and then most of them continued to Germany. But for example, last weekend [again] the central station processed about 10,000 refugees.

PERIES: Does that have anything to do, obviously, with the history of these two countries?

WODAK: Well, certainly. It has to do with sort of knowing about their perpetrator role in, during fascism. But it also really displays a very strong European sentiment. And I think what Merkel, but also the Austrian chancellor, as well as Sweden, we shouldn’t forget Sweden in this context, really emphasized right now is that if the European Union doesn’t cope with those refugees in a humanitarian way according to the Geneva Convention and the human rights charter, et cetera, then basically the core of European values will be lost.

And so this is a lot about Europe, and about what is the European Union. Is it only an economic union, or is it basically more? Do the values, the post-war values, are they still present in this context?

PERIES: And what is the plan for these refugees, that they’re so willingly accept–I know that in places like the U.S., as well as in places like Canada, there’s a very organized process in terms of processing newcomers. Will there be that kind of receptiveness on the part of the government in, say, in Germany and Austria?

WODAK: Yes, of course. I mean, there are very clear, defined procedures. And then it’s important to distinguish very clearly between migrants who come more or less voluntarily. But you know, they are not fleeing death or persecution, are refugees who are sort of [framed] by the Geneva Conventions. So when refugees enter the country they’re registered, of course. They can apply for asylum. And then there are various medical and other bureaucratic procedures. The first thing is basically to give them a roof over their head, be they tents or containers, or many people are now taking refugees into their private homes, their schools, et cetera. Any empty buildings are now being renovated to take in refugees.

And the big challenge now is to integrate these people who obviously are traumatized, and come from a very different country and culture, and who are very frequently very well educated as well, to integrate them into the German or Austrian or Dutch or Swedish societies language-wise, education-wise, and job-wise. Now, up to date, refugees, as long as the asylum wasn’t granted, which has to be processed, weren’t allowed to work. So basically, these people waited around for months and months, and were not permitted to do anything. And now these countries want to change that and finally allow people who are refugees and who are coming from Syria or from sites of war, once they enter, that they could also actually start to work and do some sensible stuff.

Children will be taken into schools, this has already started in Austria. There was a big piece on Austrian television about that. They are integrated into classrooms. They have to learn German, of course. They have special teachers. So there’s a lot of money which has to be set aside for this. And Germany has done this now, and Sweden and Austria have also done this. But this is of course one of the specific issues which not all EU countries are happy about. And right now what we observe is that the more Western countries really want to welcome refugees. Not all of them. Denmark is very hesitant, as is the UK. Whereas the former Eastern Bloc countries absolutely don’t want them. And they are frightened about their jobs, about money, about the Muslims, about different cultures, and so forth.

So there is a big conflict going on right now inside the EU which I think they will have to really manage well, because there is a danger of falling apart.

PERIES: Prof. Ruth Wodak, thank you so much for joining us today and we hope to come back to you as we follow this refugee crisis.

WODAK: Well, I’m happy to have spoken to you, and please call me whenever you want some more information.

PERIES: Thank you very much. And thank you for joining us on the Real News Network.