Running for Congress as a Progressive in a Conservative State

Richard Dien Winfield, a progressive philosophy professor, talks to Paul Jay about his platform and about exploring a run for Congress in Georgia

Richard Dien Winfield, a progressive philosophy professor, talks to Paul Jay about his platform and about exploring a run for Congress in Georgia 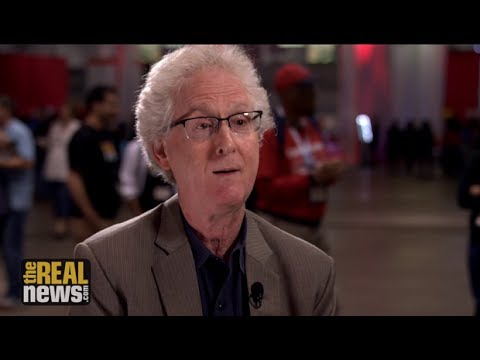 Paul Jay: Welcome to The Real News Network, I’m Paul Jay, we’re back in Chicago at the People’s Summit. One of the things we’re interested here at the Summit and afterwards, a lot of people are running for office, who never even considered running for office before. Certainly something Bernie Sanders has been calling on people to do. A year ago at the People’s Summit, it was a big conclusion of the summit, that lots of people should run for office at all kinds of levels.

Over the next little while, we’re going to be interviewing and talking to people who have made a decision, or are exploring a decision to run for office. Now joining me here in our studio at the Summit is Richard Dien Winfield. He’s a philosophy professor at the University of Georgia, he’s exploring running for congress in Georgia’s 10th congressional district. He’s running on a progressive platform that includes a federal job guarantee, with a $20 an hour minimum wage, something called Legal Care, based on the model of single-payer healthcare, which I guess means everyone actually can afford and get a lawyer. So, thanks for joining us.

Richard Dien W.: Well, I’m attempting to do both.

Richard Dien W.: Yes, yes. Well, my interest in this is to raise issues that I feel that no other candidates have put forward, that have not really yet been discussed at the People’s Summit, that are crucial parts of a new social bill of rights that we need in order to really realize the promise of the American dream, and eliminate the deficits in social freedom, and the dangers to democracy that we face.

A key platform of this new social bill of rights is recognition and enforcement of the true right to work. That is the right of all willing and able adult residents to have a full-time job at a living wage. By a living wage, I mean something that will support them and their dependents, and I think it’s realistic to speak about a $20 minimum wage with full inflation and productivity adjustments.

Paul Jay: You have to do this through public sector hiring.

Richard Dien W.: This would be through public sector hiring, through public works, that would address the kind of public works that serve the public good, such as working for green energy infrastructure, taking care of all the public services, that have in many respects been gutted by recent policies, providing all the kind of robot-proof care that people need, thinking of things like mass transit and thinking about doing all the kind of … Also, cultural activities that would allow free access to people.

Paul Jay: Now to guarantee a job at $20 an hour is like … It’s essentially proposing a dagger into the heart of capitalism, because capitalism depends on a certain level of unemployment. One of the roles of the Fed is to make sure there’s at least a three, four, five percent unemployment rate, and even higher when you look at lack of participation.

Richard Dien W.: Look, I think that that’s … It may be true that private enterprises, owing to the very structure of competition, are continually having to redo their productive process to develop a more efficient means of operations, produce new products and development, but that doesn’t mean that we leave the people who are thrown aside in the lurch with no means of remaining economically independent and secure. This is not something that is going to prevent businesses from being able to expand and draw upon a new labor force. In fact, if you put everyone to work, you’re going to increase consumer demand. I think it’s not-

Richard Dien W.: It’s not something that will be a threat to capitalism-

Paul Jay: Well, if you create a floor of wages, which essentially is $20 an hour, it’s going to create a big push on wages across the board, which is an … At least the way big corporations see it, a big threat to their profitability.

Richard Dien W.: Well, in a sense, that’s not entirely true, because the growing inequality in the United States is not directly tied to economic stagnation and the decline in our overall growth rate of the GNP, which is partly due to the fact that the share of national income that has gone to wages has become smaller than ever before. That means that at the highest reaches of individuals who have the most wealth, they’re sitting on huge amounts of capital that are not being productively invested, whereas if we do raise wages, we would allow much more of the accumulated wealth to be in the hands of those who will have to spend most of it.

We’re talking about a wage level that is actually equivalent to what the minimum wage was in 1960. It was $1.60 an hour. If you adjust that for inflation and productivity gains, it comes to over $21 per hour. Keep in mind that since 1973, wages have no longer risen in conjunction with productivity increases. There’s been a stagnation in wages, whereas from 1945 until ’73, there was a steady in-step march of both, which allowed the standard of living of most people to rise.

Paul Jay: How do you pay for this, is the obvious … You’re going to get asked that over and over.

Richard Dien W.: Well, let’s say we have 10% of the workforce, which is about 160 million people, and we think of them being employed at $20 an hour, and this would be the maximum amount in a great recession. We’re talking about each getting $41,600 per year as their salary. That would come to $660 billion. If you think of the overhead costs that the government projects during the New Deal had … They had about an overhead of about a third of the cost of what the wage expenditures were. We’re talking about something that’s still less than a trillion dollars. Our national income is over $18 trillion. Our national wealth is over $90 trillion. We’re talking about a very small fraction. Remember, we can subtract for the expenditures. All the money is going into unemployment insurance, and all the other social services that the jobless are faced with.

Then you have to think about, we’re going to be building with this expenditure assets for the public good, that will benefit economic activity in general. This is not something that is Utopia, it’s something that’s practical. Remember, during the New Deal, when our population was about 125 million people, when our level of production was something like 6% of what it is today, in the greatest economic crisis in our history, they were able to put over eight million people to work. [crosstalk 00:06:54].

Paul Jay: The other proposal of your platform is Legal Care, what is that?

Richard Dien W.: Yes, yes. Look, none of our rights are really safe unless everyone has equal access to legal representation to uphold their rights. Our constitution does guarantee people representation for criminal cases, but civil cases are just as important, because the wrongs in civil cases are no different from the wrongs in criminal cases, it’s just a matter of them being perpetrated without malicious intent.

If you think about the way in which criminal legal care is afforded people in our society, it’s clearly underfunded by and large, if one thinks about public defenders who have huge caseloads, don’t have the resources for proper investigations, court appointed lawyers may not make their court appointed duty, the real focus of their activities. Why not instead allow individuals not only to have representation in criminal cases, but also in civil cases with any lawyer they want, so that people don’t have to undergo the indignity of being stigmatized by a means test? Instead, we set up a system just like single-payer healthcare.

Paul Jay: [crosstalk 00:08:06] New York Times actually … I guess, or maybe it was in New York Magazine, just did a recent expose on a real estate company, actually owned by Jared Kushner, and in Baltimore where we’re headquartered, just outside, where there’s low-income housing, privately owned by Kushner’s company, and they’re constantly taking people to court over the most minor infractions, even sometimes people have paid their rent, are getting dragged into court and foreclosed, and they can’t afford lawyers. They depend on the fact that people can’t afford lawyers for [crosstalk 00:08:42].

Richard Dien W.: Think of all the people who are stuck in jail, because they’re not able to pay various fees of all sorts. I think this is [crosstalk 00:08:48].

Paul Jay: How do you finance that?

Richard Dien W.: I think all of these measures should be financed by highly graduated wealth taxes, and if they have to be supplemented by highly graduated income taxes. I think the wealth tax cannot suffer the problem of producing a capital fight, by being a tax on worldwide assets of people residing in the United States. I think it’s perfectly feasible to do this. The amount of accumulated wealth is the greatest in human history. It’s five times the level of our national income, and that is where the greatest inequalities reside by far.

Paul Jay: Okay, well if you decide to run, we’ll follow and see how you do. Thanks for joining us.

Paul Jay: Thank you for joining us on The Real News Network.