Russia and Bolivia strengthened their ties this week with Moscow concluding a deal with La Paz to purchase five Russian civil defence helicopters. The deal also forms part of a strategy of Latin American integration, sidelining the United States, as countries like Venezuela, Brazil, and Argentina among others, attempt to re assert control over their own progress. Forrest Hylton states that " there used to be a recognition of spheres of influence. All that is over. "

Russia and Bolivia strengthened their ties this week with Moscow concluding a deal with La Paz to purchase five Russian civil defence helicopters. The deal also forms part of a strategy of Latin American integration, sidelining the United States, as countries like Venezuela, Brazil, and Argentina among others, attempt to re assert control over their own progress. Forrest Hylton states that " there used to be a recognition of spheres of influence. All that is over. " 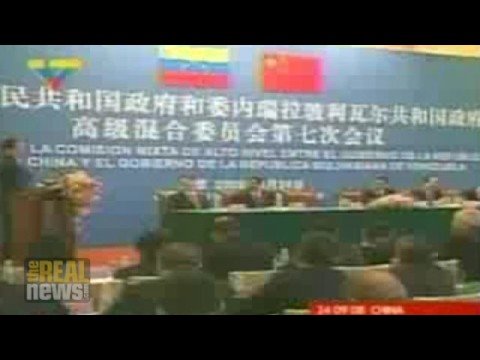 LEONID COLUBEV, RUSSIAN AMBASSADOR TO BOLIVIA (SUBTITLED TRANSLATION): We also want to show the United States that Latin America is not their backyard, and that we are also interested (in collaborating) in various spheres, including military ones. If someone needs to buy our military technologies, or participate in joint military operations, or share our technology, that is not prohibited by the United States.

NKWETA: The deal also forms part of a strategy of Latin American integration, sidelining the United States, as countries like Venezuela, Brazil, and Argentina, among others, attempt to reassert control over their own progress. With us via broadband is Forrest Hylton. Forrest, welcome to The Real News. Is this deal a manifestation of the principles of UNASUR?

FORREST HYLTON, JOURNALIST AND AUTHOR: What’s clear is that Russia now wants to exert a presence, it sees an opening, and it’s going forward rather rapidly in doing so. Of course, the background to this is some $4.5 billion, I believe, since 2005 that Chávez has spent on Russian arms. Russia has now agreed to give Venezuela the capacity to develop nuclear energy for civilian rather than military purposes. And it’s clear that Russia is looking to step up its role in the region to contest US influence, but mainly through investment, of course, in the end, both through investment and commerce rather than strictly military means. So it’s interesting to see that the presence that Russia’s now trying to exert far surpasses any real presence that the Soviet Union exerted in Latin America, because the Soviet Union did essentially respect the Western Hemisphere as the US’s backyard in the same way that the United States, ultimately, for instance, in Hungary and Czechoslovakia, accepted that Western and Central Europe were the Soviet Union’s backyard. So there used to be a recognition of spheres of influence. All that is over.

NKWETA: We’ve been hearing talks about a multi-polar world, a world that does not necessarily focus or emphasize US hemispheric dominance. Is this what we’re seeing right now? Are these the moves that are happening right now between Russia, Bolivia, Venezuela, Argentina?

HYLTON: Well, and there’s also China, of course, right? Because President Hugo Chávez was in China at the time of the UN meeting in New York, kind of symbolically suggesting that they’re now alternative sources of capital investment, because that’s what we’re talking about here, ultimately, is trade and capital investment. In that sense, Russia’s working very quickly to exert its influence in the region in the wake of the systemic meltdown on Wall Street, and also the quagmires in both Iraq and Afghanistan. It’s certainly a good time for Russia to press its own national interests as it understands them, and it’s doing so very quickly. And, furthermore, you could say that it’s high time that Russia make its bid for a piece of Latin America, because the time to get a piece of it is clearly now. The meeting in Manaus, Brazil, in the heart of the Amazon, between Lula, President Chávez, President Correa, and President Morales to talk about mega-projects and infrastructural development that would facilitate trade flows, resource flows, and, of course, transportation and integrate Latin American economies so that they’re not so oriented towards the United States or Europe or even Russia. So I think that’s also part of the background to the play that Russia has made. I think another part of the background is the war on Georgia. Russia came out ahead very clearly and demonstrated to the world that, you know, there is no way that the United States can simply just dictate outcomes, given local forces at play, and Russia clearly had a much better sense of those local forces than the United States did. So we’re seeing that in Latin America. But as the ambassador of Russia to Bolivia stressed, Russia is now taking advantage of what they see as an opportunity generated by the leftward shift in Latin America, and it’s rather odd, because Russia is undergoing no such leftward shift, nor is China. Those are obviously highly sort of authoritarian governments whose capitalism functions in accordance with the type of state that they have. And Bolivia is open to investment from these states. Iran would be another. Venezuela is open to investment. But more importantly, I think, is the strengthening of regional institutions like the Bank of the South, which these four countries who met in Manaus are hoping will help to weather the severe economic crisis that’s going to affect all of them, as President Chávez announced yesterday. Nobody will be untouched by this in Latin America. So it’s interesting to see them trying to look to foreign powers like Russia and China, but also to strengthen their own resources and begin to cooperate on a more and more practical level, because it’s always been announced sort of rhetorically as a goal and a dream and an ideal. But now it really does seem to be being realized in practice. But I think the condition for that is precisely emergence of Russia and China on the world stage.