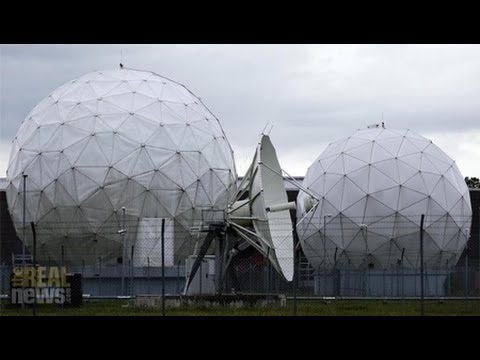 A new revelation by Edward Snowden has found that the National Security Agency has the ability to digitally record the contents of each and every phone call occurring across entire nations. The secret spy program is called MYSTIC. And you can see in this cover slide from a weekly briefing deck it’s represented by this cartoonish wizard, because MYSTIC almost works like a time machine. It allows agents to go back a month and listen to phone conversations.

While the NSA is barred from specifically targeting the conversations of Americans, The Washington Post warned that U.S. persons are most certainly having their cell phone conversations sucked up if they call, seemingly, anyone located in a country where the program is carried out.

Now joining us to discuss all this is our in-studio guest Russ Tice. He is a former NSA intelligence analyst, an operations officer, and he was the first to blow the whistle against the NSA in 2004.

RUSS TICE, FMR. NSA ANALYST AND OPERATIONS OFFICER: Thanks for having me.

DESVARIEUX: So, Russ, just let’s get right to it. What is the significance of this revelation?

TICE: Well, this revelation apparently is saying that we’re doing this against a foreign nation. Now, remember, this wasn’t something the government has volunteered to the press and to the people, but obviously Mr. Snowden’s files were the reason this came out. But what people have to understand is the federal government and NSA has been doing this very thing against the American people for at least the last year and a half. And with the onset or with the opening of the Bluffdale facility, by the way–and that happened in December 2012–NSA now has the capability to store all content from all communications, both phone and computer, at that facility out there. And our own domestic communications are part of that complete package.

DESVARIEUX: So, essentially, MYSTIC could be happening in the U.S., you’re saying.

TICE: MYSTIC has been happening in the U.S.

DESVARIEUX: Okay. And what do you say to those who say, even if it is happening, why should I really care? Because the U.S. government, you know, they can listen in to my phone calls. I don’t have anything to hide. What would you say to those folks?

TICE: Well, I would say, first of all, you know, if you don’t–we have tomes and volumes of laws. And do they know every law out there on the books and know that they haven’t violated one of those laws that someone targeting them at some point couldn’t flip back through in the past so many years to say, oh, look, Mary violated this law four years ago? Second of all, you know, we have a constitution, we have civil liberties, we have the right to privacy as citizens. So it’s okay for that individual to say they don’t care about their own, but I certainly don’t think they have the right to tell me or citizens that care about their liberties that we have no right to ours.

DESVARIEUX: Russ, many argue that you can’t really have this conversation about the NSA and privacy without really dealing with the U.S. military-industrial complex, our foreign policy which aims, really, to keep the U.S. as the world hegemon. So for you, what do you make of that argument? Do we really need to start shifting how we even approach the world and how we interact with other countries?

TICE: Well, that’s the premise that the United States–well, depending what slant you put on it, that the United States either has to take over economically or that we are the world’s policeman and that we are out there and our job is to make sure that, you know, things don’t happen, you know, in one respect or if the one country is at war with some other or some civil war, we have to go out there and make sure none of that happens in the world.

Now, we had Secretary Kerry, with the situation in the Ukraine, in Crimea, come on TV and say that it’s horrific that a state like Russia or a country like Russia would use false pretense to invade another country. I assume that Mr. Kerry has amnesia and he doesn’t remember that we waltzed into Iraq in 2003 and under a completely false pretext. And the world is not blind. The world knows, you know, we’ve done these things. So when Ronald Reagan said that we are the beacon of freedom and democracy on the hill–and, you know, when I was young, I believed that. You know, I was fighting for freedom and, you know, civil or back again to the Cold War. You know, I was all-in.

DESVARIEUX: So you were raised a conservative.

TICE: So, you know, I’m all-in to fight the good war, to fight the good fight and fight against the bad communists and the evildoers in the world, and then I come to find out that my own country and my own agency was woefully violating our own constitutional liberties and our country has been doing some things in the world that are just horrific. You know.

DESVARIEUX: After witnessing all of these horrific events–and I just want to get a sense from you, though. Now, today, how do you feel about the U.S.’s role in the world? Should we be the global leader? And if so, how does that really transpire into protecting civil liberties and protecting ourselves from imminent attacks?

TICE: I don’t think we can afford to be the policeman in the world. You know, we’re at $17 trillion in debt in this country, and we go in the hole ever deeper every day. So, you know, that means every child born in this country this very day owes the government over $55,000. We cannot sustain a country like that. We can’t afford–even if we want to be, even if we’re going to say that we’re benevolent and that we’re going to be the beacon on the hill and the world’s policeman, we can’t afford to be the world’s policeman. And I think we have to lean more towards the United Nations and towards international means to put pressure on countries that need a little policing.

DESVARIEUX: So, Russ, in part two I really want to talk more about why you decided to blow the whistle in 2004. But just hang tight. Thank you so much for joining us in-studio.

TICE: Well, thanks for having me.

DESVARIEUX: And please be sure to check out part two of our segment, where we speak to Russ Tice about why he decided to blow the whistle and what was really his motivation for coming forward.

Thank you for joining us on The Real News Network.