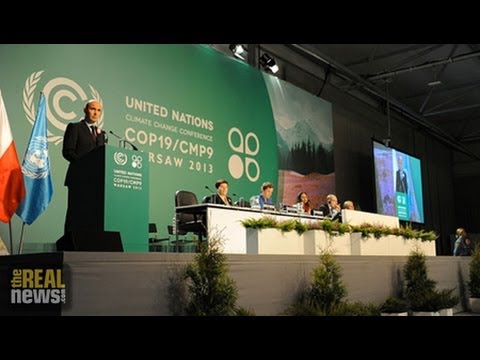 The 19th UN Climate Change Conference is currently underway in Warsaw, Poland. Critics say it has among the highest corporate presence of any climate change summit to date. And with the government-sponsored world coal summit being held next door, some have dubbed this year’s climate negotiations “the coal COP”.

Now joining us to discuss this, the corporate influence at the COP 19, is Rachel Tansey. She’s a writer and researcher on environmental and economic justice issues. She’s the lead researcher and writer on the new piece The Top COP 19 Guide to Corporate Lobbying, published by the Corporate Europe Observatory and Transnational Institute.

Thank you so much for joining us, Rachel.

RACHEL TANSEY, WRITER AND RESEARCHER ON ENVIRONMENTAL AND ECONOMIC JUSTICE: Thank you. Hello.

NOOR: So, Rachel, talk about what you find in your study. And a part of this is the fact that Poland has designated 12 major corporate sponsors to the COP 19.

TANSEY: Yes. Well, we’ve always seen a lot of industry and business lobbying around the climate talks. But what’s unique about this year is that the presidency of the UNCCC–that’s the UN climate negotiating body–which is currently the Polish government, has invited 12–now actually 13 different companies to be partners to the conference. And these partners are corporations which are profiting from contributing to climate change.

We have oil and gas companies like the French conglomerate Alstom, to polish coal and oil companies PGE and Lotos, the world’s biggest steel company ArcelorMittal, not to mention BMW and General Motors, Emirates Airline, basically all corporations which are contributing massively to climate change if you look at the effects of their businesses. But even more importantly, they’re lobbying very, very hard and doing their best to prevent climate action, to prevent the kind of progress we need to see in the climate talks. And yet they’ve been embraced into these climate talks by the presidency, the Polish presidency.

Added to that, we saw business and polluting industries invited to the pre-COP, which is a really important stage of the negotiations before the COP starts and another opportunity for them to influence the agenda in their interests but against effective climate action.

And you’ve already mentioned that with this coal summit that’s going on, sanctioned, again, by the Polish government alongside the COP, we’re really, really seeing the exact opposite of what we need to see in order to get a proper climate agreement that respects the principles of climate justice.

NOOR: So the Polish government, other people that support inviting the corporations, would argue that, you know, because of the urgency which action is needed–people would point to what’s happened in the Philippines with the typhoon, as well as the recent report from the UN-backed Intergovernmental Panel on Climate Change, that because of this urgency, that we need action now and that these corporations, which, as you talk about, emit a lot of these emissions, they need to be on board, they need to be part of these discussions. What’s your response to those arguments?

TANSEY: Well, my first response is that if you are having a conference on how to solve malaria, do you invite the mosquito? Or do you see the World Health Organization inviting big tobacco companies like Philip Morris to its conferences on how to stop the harm that tobacco causes? No, you don’t. And for them that’s for a very good reason. They actually have a treaty which stops, which demands that policymaking for public health is protected from the vested interests of the industry that profits from the harm of its products.

That’s a very strong analogy with what we’re seeing with the fossil fuel industry, which wants to keep burning fossil fuels, fossil fuels that the climate science tells us we need to keep in the ground. But they are doing their very best to ensure that they can continue using those fossil fuels, because they profit enormously from them.

And they are also pushing solutions to climate change which will actually bring them more profits, focusing on things like intellectual property and copyright and market mechanisms from which they could gain more windfall profits to create new markets from which to, you know, gamble on and make more profit once again.

So the idea that these corporations are doing anything other than trying to undermine and subvert the action that we need to do is absolutely false. I mean, you know, there’s an awful lot of evidence that shows that, that shows the lobbying positions, that shows the climate skeptic think tanks funded by corporations like those sponsoring the COP. In fact, General Motors was one of the Heartland Institute’s–U.S. very climate skeptic free market think tank for many years.

We’re seeing basically the reality on the ground is that they’re not trying to make a climate agreement that’s strong and just and effective, and it’s just they’re trying to prevent that and to profit from it in the meantime so that they can continue making these emissions. And that’s why we need to see restriction on the contacts that these kind of the lobbyists for the fossil fuel industry and so on can have with the people who are charged with regulating them. And then, yeah, sure, they can–you know, once the regulations are in place and once the climate agreements are made to ensure that they do make the emissions reductions are in line with the science, then, you know, certainly contacts can continue. But until that time, it’s very important that the kind of corporate capture by polluting industries we’re seeing at COP 19 is stopped.

NOOR: And so you’re actually on the ground in Warsaw right now. Talk about the reaction from UN delegates to the civil society groups that are there, as well as grassroots Polish organizations that oppose the corporate influence.

TANSEY: Yeah. Well, I think what a lot of people are talking about in the conference at the moment is this corporate capture, because the corridors are lined with stalls of groups like the International Gas Union and oil lobbies, people lobbying for so-called clean coal. Lots of corporate events that are trying to push their positions are being seen everywhere.

So people, along with the fact that you have the branding of the corporate partners all over the stadium, people are really starting to see this–you know, especially in the light of what we’ve been seeing in the Philippines, where you’re seeing so much human suffering as a result of the kind of extreme and more frequent weather events that will be happening with climate change and are happening already–like, with that reality in the background, and you’re seeing the kind of–the fossil fuel companies that are pushing, you know, that are really contributing to climate change plastered all over the conference center, that’s created a real kind of feeling amongst delegates, amongst civil society, that this has got to change and that this is actually undermining and subverting the process.

So, for example, there’s lots of Polish youth groups and others in civil society from around the world who been mobilizing and doing actions to highlight this. Today there was an action auctioning off our climate agreement to the highest bidder, which is a tongue-in-cheek attempt to show what’s actually happening.

And, yeah, I think this COP more than ever is really selling to people that when you let the interests that profit from the harm they’re causing actually try to influence the policymakers who are trying to prevent that harm, you have a real problem.

NOOR: Rachel Tansey, we’ll link to your new piece, The COP 19 Guide to Corporate Lobbying, at The Real News. Thank you so much for joining us.

Rachel Tansey is a freelance writer, researcher and campaigner on justice issues – environmental and climate justice as well as corporate, economic and social justice. She has worked for various non-governmental organisations including Corporate Europe Observatory, which challenges corporate influence over EU policy, environmental group Friends of the Earth Europe and faith-based NGO Quaker Council…