Industries Across the U.S. Are Stealing Wages From Their Lowest Paid Workers

Fast food worker Tenesha Green describes how she personally experienced wage theft on the job, while law expert Rebecca Smith explains the significance of the lawsuits against McDonald's after New York forces McD's owner to pay half a million dollars to employees for back pay

Fast food worker Tenesha Green describes how she personally experienced wage theft on the job, while law expert Rebecca Smith explains the significance of the lawsuits against McDonald's after New York forces McD's owner to pay half a million dollars to employees for back pay 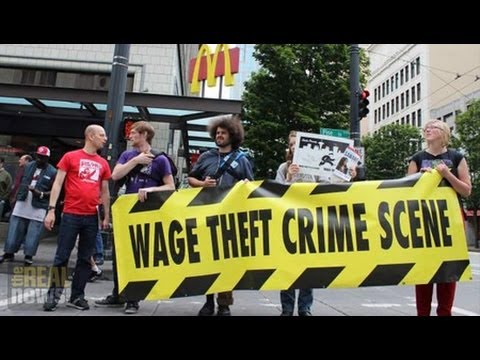 McDonald’s workers recently filed a class-action lawsuit in three states: Michigan, New York, and California. They’re accusing McDonald’s of wage theft. And on March 18, fast food workers protested in 30 cities across the country to raise awareness about the problem of wage theft by employers. The nationwide action comes on the heels of a settlement between New York attorney general and an owner of seven McDonald’s franchises. The owner will have to pay $500,000 to 1,600 current and former employees after making illegal deductions from their paychecks.

Now joining us to discuss all of this is our guest Rebecca Smith. She’s the deputy director for the National Employment Law Project.

And we also have joining us Tenesha Green. She’s 28 years old, and she works at Wendy’s in Richmond, Virginia. She’s currently working at Wendy’s, making $7.25 an hour, and she says that she’s had to work off the clock and pay out of pocket for register shortages while working at Wendy’s.

REBECCA SMITH, DEPUTY DIRECTOR, NATIONAL EMPLOYMENT LAW PROJECT: Thanks very much for having us.

DESVARIEUX: So, Rebecca, I’m going to start off with you, because when I first heard the term wage theft, I thought to myself, what is that exactly? So please explain. What is wage theft?

SMITH: Well, wage theft, that term describes a pretty wide variety of ways in which employers steel money from workers. So some employers may just refuse flat out to give a worker their paycheck at the end of the day. Some might refuse to pay overtime pay, time and a half, that you are entitled to receive under federal law when you work more than 40 hours. Some will pay with bounced checks. And others will do some of the things that you’ve been talking about already: require workers to come in early or stay late and not pay them for those hours, not give them meal breaks or rest breaks, take things out of their pay that are unlawful under federal and sometimes state law.

DESVARIEUX: Sure. You say that you’ve had firsthand experience with wage theft. Can you just give us a specific example of when you experienced wage theft?

TENESHA GREEN, CREW MEMBER, WENDY’S: Okay, a time where I’ve experienced wage theft, what I would say is having additional time taken off of my break. There are times when coworkers may come in off of their break, maybe one or two minutes late, and the managers, whoever would be on shift, would become frustrated that you come in two, three minutes behind the scheduled break, and they’ll take an additional 15 minutes off of what you’ve already taken off while you’re working. So you’ve been working maybe 15, 20 minutes, and you’re not getting paid for it. There are times when they’ll tell us employees that if your drawer comes up short, that it would be coming out of your paycheck. When it comes to working for fast food restaurants, my store in particular, you do have to pay for your own uniform. The only thing that you do not have to pay for is one Wendy’s shirt, an apron, and a hat. So you have to purchase your own slip-resistant shoes, as well as the pants, and any additional equipment that you feel that you may need to perform the job that’s necessary–you have to pay for it out of your own check.

SMITH: Well, usually you can prove things like rest breaks and meal breaks not being given, or people having to come back from them early, just by the volume of workers who will agree that that is in fact what has been happening. You can prove it as well by keeping records of what happens every day, whether you get a break, how long that break is. And with respect to things like uniforms, usually employers will admit that they’re requiring workers to pay for their own uniforms. That’s a violation of federal law if it is indeed a uniform and if it takes you below what is a terribly, terribly low federal minimum wage of $7.25 an hour.

DESVARIEUX: Tenesha, I want to get your perspective on why you decided to come forward and talk about a living wage, ’cause I can imagine there are fast food workers out there who could be watching this and saying that, yes, I’m experiencing the very same things, but I’m afraid to speak out ’cause I’m afraid of retribution. What would you say to those fast food workers?

GREEN: The one thing that I would say to those fast food workers is that you have to start somewhere, and if you cannot really expect a better treatment or a better pay as someone–is not courageous enough to stand up and take charge of the situation. When you know you’re right and you know what you’re capable of, you know what you are worth, you expect to be held up to that standard. So I would say to other fast food workers, ultimately: do not be afraid; if you want better, you have to step out there and try harder to get better.

DESVARIEUX: So, Rebecca, I want to get your thoughts on the prevalence of wage theft, because in 2012, U.S. Labor investigators collected more than $280 million in back wages last year. That’s nearly $100 million more than investigators recovered in 2008 when the recession hit. So give us a sense of how prevalent wage theft is. And what recourse do employees have who believe they are victims of wage theft?

SMITH: In part, the U.S. Department of Labor recovered more back wages in the last couple of years because they have been able to increase their staff. It’s still woefully inadequate. And one expert says that an employer has a risk of being investigated by USDOL that is 0.001 percent. So there’s almost no reason for employers not to commit wage theft.

And it’s hugely, hugely prevalent. There are dozens of surveys and studies in every industry you can name that find wage theft really, really common among low-wage workers. My office collaborated on a study of 4,000 workers across the country a few years ago, and we found that about a quarter of workers had not been paid minimum wage in the week of the survey. Three-quarters of them had not been paid overtime pay even though they had worked overtime hours. And something that Tenesha has alluded to: 43 percent, if they complained, suffered retaliation.

And people aren’t just losing pennies out of their wages. Our study found that low-wage workers were losing 15 percent of their wages, $2,600 and some cents, every year because of wage theft.

DESVARIEUX: I want to pivot to the class action lawsuits that were filed in Michigan, California, as well as New York, and they are basically specifically targeting McDonald’s. I want to get your perspective, Rebecca, because from my understanding the class-action lawsuit is holding McDonald’s corporation responsible along with the franchises themselves. So is this a new legal precedent that we’re seeing?

SMITH: There have been some cases where workers have filed lawsuits against franchisors as well as the people who purchased the brand, the franchisees. But this is perhaps the first very large scale attempt to hold McDonald’s liable. And the legal theory really has to do with how much McDonald’s controls the work and the wages and working conditions. What is its relationship to the workers on the ground?

It’s really interesting. The kinds of allegations that are coming out are that McDonald’s has this very intensive computer software that calculates how many people the franchise has to hire and what their schedules are and how long it’s taking them to fill a customer order, that tracks their labor costs, that in some ways McDonald’s as well acts as a labor broker for all of its stores, so that if you apply for a job at McDonald’s, you apply through McDonald’s, even though you’re ultimately going to be working for a franchisee.

So, you know, we all know that the brands control pretty much everything in a store. That’s the way that McDonald’s and others sell their hamburgers: you know that it’s going to be exactly the same everywhere you go. So they control every detail of how and what and wheres and when in terms of how the franchisees operate. And now the question is how much they control also what the workers do on the job.

GREEN: I hope that it would go far enough, so we can raise the minimum wage all over, because there’s people all over that are suffering. They may have bills and family that they have to take care of. And while the corporations and the big businesses are making the money, the workers are really doing all the work for them to make the money. They’re not living. They don’t have means to live a comfortable life. Nowhere near it. So I would just–I would say that I hope that it would pass through so things can become better all over.

DESVARIEUX: Alright. Rebecca Smith and Tenesha Green, thank you both for joining us.

SMITH: Thanks very much.

Tenesha Green is a 28 years old crew member at Wendy’s in Richmond, Virginia. She’s been working at Wendy’s for over a year, and makes $7.25 an hour. Tenesha has decided to speak out against wage theft because she’s had to work off the clock and pay out of pocket for register shortages while working…

Rebecca Smith is the Deputy Director for the National Employment Law Project. She joined NELP in 2000, after nearly 20 years advocating for migrant farm workers in Washington State. At NELP, she has worked with state advocates to modernize state unemployment insurance programs, promoting reforms to fill the gaps in the program denying benefits to…