Theresa May's dwindling campaign gets the "terror attack" bump considered necessary for a victory on June 8th, while the right attempts to connect Jeremy Corbyn to the memory of the 1996 IRA Manchester bombing, says Richard Seymour of Salvage

Theresa May's dwindling campaign gets the "terror attack" bump considered necessary for a victory on June 8th, while the right attempts to connect Jeremy Corbyn to the memory of the 1996 IRA Manchester bombing, says Richard Seymour of Salvage 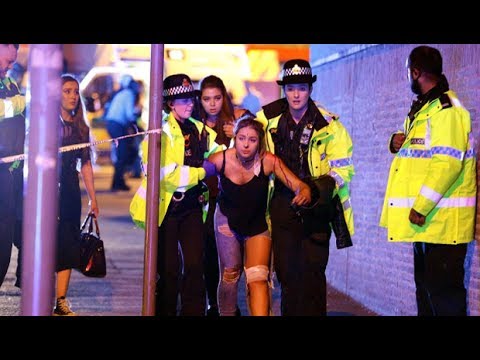 SHARMINI PERIES: It’s the Real News Network, I’m Sharmini Peries coming to you from Baltimore. The death toll has risen to 22 and 64 people are injured in the Northern English city of Manchester as a result of the Monday evening suicide bombing. Young people that were gathered at the Ariana Grande concert in the Manchester Arena are still in shock, some in therapy and the city itself is still in mourning.

The Islamic State issued a press release claiming responsibility for the attack and the U.K. government has increased its terror threat level to its highest level as critical. Five people have been arrested in the U.K. and two in Libya. In relation to the bombing, police say it’s clear that the bomber was linked to a network. The suspected suicide bomber was first named by the U.S. authorities as Solomon Abedi and he is a 22 year old U.K. born student of Libyan descent.

Now joining us from London to discuss this is Richard Seymour. Richard is a writer, broadcaster and activist. He writes for the quarterly Salvage and blogs at Lenin’s Tomb. Richard, I thank you so much for joining us.

RICHARD SEYMOUR: Thank you for having me.

SHARMINI PERIES: I know several vigils were held last night and the mood in Manchester is very somber but what’s the feeling in London about all of this?

RICHARD SEYMOUR: Well I think there are two, broadly two kinds of response. One is the kind of, the collective, solidaristic response that we saw in Manchester and you get a little bit of that in London too, which is a refusal to be divided or a refusal to let racism be the response to this. And that’s a sort of consensual, convivial, multi-cultural response and then there’s quite a, sort of, a lot of tension and stress and there’s a desire for protection and that can feed into quite authoritarian responses and in some cases, downright racism.

SHARMINI PERIES: All right and we know that many people are of course perhaps scared with the threat level being raised to critical. What does this mean on a day to day basis when it comes to living there?

RICHARD SEYMOUR: Well, a critical threat means that a threat is considered quite likely; meaning that because this attack was conducted in the way that it was, is very likely or at least plausible that it was linked to a wider network and therefore, they’ve implemented an operation that has been in place since about 2015. This involves the deployment of armed forces. Armed forces are being sent out to guard certain key potential targets. So, it doesn’t necessarily affect mobility a great deal just for the average punter but it does mean that quite a lot of people are having their bikes searched, they’re being asked for identification, homeless people are being moved on, if you’re a person of color you’re more likely to be searched. It’s a kind of stressed, tense atmosphere to that extent.

SHARMINI PERIES: Right. With the U.K. general election just a few weeks away to be taking place on June 8th, how will this upheaval, this political turmoil affect the parties? I know that parties have temporarily suspended campaigning but before the bombing, Teresa May’s campaign was really suffering. What affect will this bombing have on the upcoming election?

RICHARD SEYMOUR: Well, it’s important to keep in mind a bit of the context here. Despite the fact that Teresa May has a very clear advantage in that because of–her party is drawing in the support of formally right wing voters for the U.K. independent party and therefore creating a huge electoral block. She had one, as you say, a very weak campaign, a plundering campaign, her support was going down, Labour’s support was going up but Labour’s weakness as far as the conservatives were concerned was that they felt that they could depict its leader Jeremy Corbyn as a terrorist sympathizer, soft on terrorism and they went back to old smears linking him to the IRA and a number of tabloids have been preparing smears like this for some time. This attack, this murder, gave them an opportunity and they took it. They ruthlessly exploited it. So you have the front page of the Sun declaring that Corbyn and McDonnell had blood on their hands, even though the story had nothing what-so-ever to do with the attack in Manchester. The clear implication was that they are not to be trusted in dealing with the nation’s security.

Now, it’s not yet clear what kind of effect this campaign of smears will have. Some people have found it to be quite ghoulish and predatory in its effect but given that we’ve got troops on the streets, energy under the election campaign, given that Teresa May has suddenly been made to look very states person-like, which is fairly easy to do if you’re the Prime Minister of a country that’s just been attacked, this could fundamentally alter the dynamic.

SHARMINI PERIES: Richard it’s interesting that while Jeremy Corbyn is being attacked by his past to support for the IRA, we haven’t quite gotten some very direct evidence of that, little coverage seems to be given about Teresa May’s government’s direct and indirect support for violent actors abroad; to what extent is the British population talking about such collusion’s say with Saudi Arabia where a lot of extremist militant groups really evolve from, always funded by the Saudi elite?

RICHARD SEYMOUR: Well, that’s not a major topic certainly in the media. These conversations are going to be going on social media and ordinary people but they’re very sub-altern, they’re very excluded from the dominant discussions in the media, which are mainly about security, they’re mainly about checking bags, they’re mainly about the kind of intelligence that we have, they’re mainly about immigration, there’s a lot of anti-muslim rhetoric coming up from certain quarters. Allison Pearson, Telegraph journalist, called for internment, Katie Hopkins, the all around shop jock, called for a final solution. These conversations, while they will be had among ordinary people in all parts of the country because of course we’re living in the aftermath of the war on terror and it’s filled legacy are not being held at a top level.

SHARMINI PERIES: All right Jeremy, I know what you’ve mentioned a few people in the media that have seized this opportunity of the horrible incident of a terror attack for political advantage, how is that being received in the country?

RICHARD SEYMOUR: Well, it’s hard to say but what I can say is that there has been some shock response. For example, there was a gentlemen who was targeted by the Telegraph and by a number of other newspapers and journalists desperate to get an interview with him, desperate to talk to him because it was believed that one of his relatives was present at the Manchester Arena when the bombing took place. Now, he posted on Twitter about this saying, “I’m outraged. I don’t even know if my brother is alive yet. Why are these people tracking me down?” He subsequently posted a fiercely critical attack on The Sun newspaper for its manipulative exploitation of the tragedy to attack Jeremy Corbyn so there are these kinds of responses. However, it’s very hard to say whether that necessarily reflects a wider view. Generally speaking, security and related issues are a set of issues on which the right of the spectrum tends to dominate.

SHARMINI PERIES: And thank you for joining us on the Real News Network.

Richard Seymour is a writer, broadcaster, and activist. He writes for the quarterly Savage and blogs at Lenin’s Tomb.