Full Employment and the Swedish Model

Bob Pollin Pt3: In the quest for a short term solution to the crisis, there is a lot to learn from Swedish social-democracy

Bob Pollin Pt3: In the quest for a short term solution to the crisis, there is a lot to learn from Swedish social-democracy 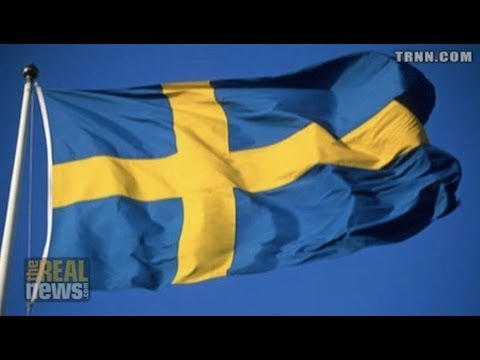 We’re continuing our series of interviews with Bob Pollin about his new book, Back to Full Employment. And he joins us again from Amherst, Massachusetts, where he is codirector and founder of the PERI institute. Thanks for joining us again, Bob.

ROBERT POLLIN, COFOUNDER, POLITICAL ECONOMY RESEARCH INSTITUE: Thank you very much, Paul, for having me again.

JAY: So in terms of modern history, one of the models that’s often pointed to, at a country that kind of tried to marry Keynesianism and that form of capitalism that seemed to have been working to some extent, was in Sweden. And you talk about this in your book. So discuss that model a bit.

POLLIN: Well, I think that’s a very, very rich model with a lot of lessons for countries throughout the world. I myself, in work I did several years ago in Kenya, actually, on employment opportunities in Kenya, was thinking about the Swedish model in writing the book on Kenyaâ€”and still thinking about it in a book about the United States. So it isn’t so much about Sweden, per se.

The idea is that, okay, we have the Keynesian tools that can promote employment. We do know that at a certain point you will create inflationary pressures, and so that how do you maintain a full-employment economy that benefits workers. And the best way to do it is when you have strong unions that are committed to full employment. And they will maintain wage increases that are roughly consonant with productivity growth, so that you do not get upward price pressure, because every time you get a wage increase, that’s roughly in step with the economy’s capacity to produce more goods and services. That’s a productivity increase. And it was really due to the unions themselves that attempted and implemented this policy.

In fact, the innovators here were two outstanding union economists, Rudolf Meidner and [ËŒgÉ‘stÉ™ËˆrÉ¨Éªn]. (I don’t know how to pronounce the names correctly. I’m sure I’m mangling them.) But they were very important economists in thinking about how to achieve and sustain a full-employment economy, precisely by empowering workers. Empowering workers gives workers the sense of responsibility [inaud.] oh, well, we are going to take responsibility for dampening whatever inflationary pressures may result, and yes, we can sustain a little bit higher rate of inflation, but we will make sure that prices and wages do not go up excessively, precisely because we the workers, we the unions have the power to do it.

So I think that is a very rich model. They were able to maintain unemployment for 20 years or more at around 2 percent, and the inflation rate was basically stable, even though you had oil price shocks in Sweden as well.

JAY: But but over time, the neoliberal pressure took over Sweden as well and the power of finance asserted itself, and they started undoing that model.

POLLIN: â€”yeahâ€”and the rest of Europe. So Sweden still stands out as a veryâ€”as a country that’s performing much better, has much lower levels of inequality. But, yes, a lot of the model has been cut back. But we have to have something to grab on to when we think about how to build out and come up with alternatives out of the Great Recession and the disaster that neoliberalism has inflicted both in the United States and the rest of the world, and I think there’s a lot to learn from the Swedish model. I don’t say it’s perfect, but I think if we think about policies of moving from where we are today, not just thinking about a utopian alternative that we can envision, but policies starting with where the world is today, in the neoliberal swamp, I say that the Swedish model has a lot to offer for moving us forward.

JAY: Okay. We’re going to pick up this discussion about the Swedish model and such a little further in the series, ’cause we’re going to come back to, keep revisiting many of these issues. But we’re going toâ€”in the next part of this series of interviews, we’re going to pick up on the next chapter of Bob’s book, which is "Globalization, Immigration, and Trade". And part of one of the ideas Bob raises is this idea of the reserve army of the unemployed actually becomes the whole world, and global workers and low-paid workers and global unemployed workers used as a lever against North American and European workers. So we’ll pick that up in the next part of our series with Bob Pollin on The Real News Network.