Bob Pollin Pt2: There have been periods of unemployment less than 4%, those conditions could be created if there was intent to do so

Bob Pollin Pt2: There have been periods of unemployment less than 4%, those conditions could be created if there was intent to do so 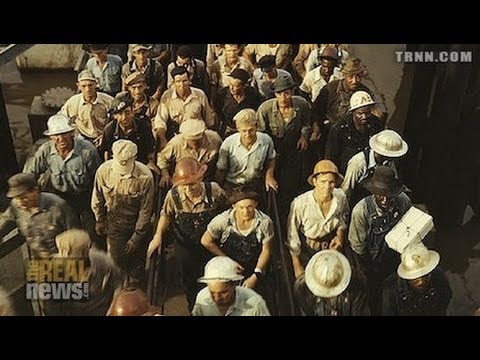 We’re continuing our series of interviews with Bob Pollin about his new book, Back to Full Employment. And he joins us again from Amherst, Massachusetts, where he is codirector and founder of the PERI institute. Thanks for joining us again, Bob.

ROBERT POLLIN, COFOUNDER, POLITICAL ECONOMY RESEARCH INSTITUE: Thank you very much, Paul, for having me again.

JAY: So if you haven’t watched part one, go watch part one. Part two, the question is: is full employment under capitalism possible? So, Bob, some people would suggest the answer to that question is: if full employment under capitalism was possible, they wouldn’t be capitalists. In other words, if they did implement the kind of policies you’re talking about, it would just go against their nature. And so how do you answer that?

POLLIN: We have evidence that full employment has operated under capitalism. It certainly operated, as we talked about in the last segment, briefly in the United States in the late ’60s and late ’90s. It certainly operated in Europe in the early period after World War II. We have a lot of evidence, for example, in the Nordic countries.

Sweden is a really good example ofâ€”because the unions in Sweden had a lot of political power, they were able to do some very interesting experiments to push the economy toward full employment and stay there. The unions had enough power that they could think about macroeconomic policies to push the economy to full employment, while the unions themselves were focused as well on inflation control, restraining inflationary pressures, so that you could actually sustain the full employment that would be good for workers over time. And so we do have experience that this has happened.

It is a different kind of capitalism. It is a capitalism in which workers have more power, unions have more strength, the concern for the well-being of working people is much higher than it is today. And that’s the kind of society I think we need to move toward. Where we go after that, okay, we can talk about where we go after that, but just to get to that point in which public policy is genuinely focused on providing a maximum amount of job opportunities and well-being for people, to get to that point in our policy debates would be a major achievement.

JAY: And we’ll get into that, how you think we get there, a little further in this series of interviews. But let’s kind of go step by step here.

So give usâ€”trace us a little bit about the history of this debate. As you said in part one, Marx says it’s in the interest of capitalists to have a certain level of unemployment because it controls wages, and then Keynes kinds of counters that argument to some extent in terms of the role government could play. So give us a bit of the historical background here.

POLLIN: Alright. Well, I go through what I think are the four major thinkers on the theory of unemployment. The first is Marx, and it was Marx who said that having a reserve army of labor, a lot of unemployed people, is necessary for the functioning of capitalism, because if you had no unemployment, then workers’ bargaining power would go up, workers’ wages would go up, capitalists’ profits would get squeezed. Okay, that’s Marx.

Now, Keynes came in with a different view. Keynes was thinking more as a technician within the framework of capitalism. And he said, if you do not get to full employment through private investment in the economy, then the government should step in and engage in public investment. His term, Keynes’s own term, was "somewhat comprehensive socialization of investment". And if the government did this somewhat comprehensive socialization of investment geared towards creating maximum job opportunities, that would be a better society, a different kind of capitalism. But technically, he said, it could be done.

Moreover, the central Keynes point was that actually this could be good for capitalists as well, because even though workers would have more bargaining power, you would also have the economy expanding more rapidly, the markets would be more buoyant, there’d be more opportunity for new business investment, just because workers would have money in their pockets and they could buy things, just like Henry Ford was famous in recognizing that if you paid workers decent wages, well, then workers might actually be able to afford to buy Ford automobiles.

JAY: Right. And this Keynesian idea’s heavily influenced this act that we talked about earlier, the Humphrey Hawkins Act, ’cause if I understand correctly, in that act it actually says if the private sector can’t create enough jobs to get unemployment at 4 percent, then the government should use public works to do it. I mean, it was in the legislation; I don’t think it was ever really enacted, ’cause five years later, unemployment’s at almost 10 percent. But the ideas were very influential.

POLLIN: Right. So you have Marx and Keynes, and those are also reflective of different notions about how capitalist economy functions. Keynes was much more in the social democratic tradition, operating within the institutions of capitalism.

Now, the third great thinker to mention was a contemporary of Keynes named MichaÅ‚ Kalecki. He was a Polish Socialist who was influenced both by Keynes and Marks and had some ideas, obviously, of his own. And what Kalecki said was, okay, Keynes has now shown us how we can utilize the technical apparatus of economic policy to achieve full employment under capitalism, but what Keynes neglects is the change that it would create in terms of political dynamics, that it would give workers more bargaining power, and that the capitalists don’t want the workers to have so much bargaining power. It would squeeze profits. Kalecki acknowledges all this. And therefore, he says, though we have the technical tools to achieve full employment under capitalism, we don’t have the political force, and it would be a clear challenge to the prerogatives of the rulers of the society, the capitalists, to do this. So he laid out the real tension there.

But within Kalecki there is still the point that if you get a bigger market, then capitalists can benefit from a more buoyant market, even if the wages are higher and the capitalists’ share of the total market, the income coming back to them, is lower because workers have more bargaining power. That’s the tension.

And so the fourth major thinker, most influential thinker, I would say, on the issue of employment is the leading neoliberal economist, Milton Friedman. And Milton Friedman actually said that we have a natural rate of unemployment under capitalism which would be full employmentâ€”that is, anybody who wants a job would get a jobâ€”if we only didn’t have government policies that created barriers to workers and businesses working things out on their own.

Unfortunately, the winner of the debate over the last generation, not just in the U.S., throughout the world, was clearly Milton Friedman, and so that what we have under neoliberalism for essentially the last 40 years is an abandonment of any attempt by government policy to sustain full employment, to use government policy to soak up people that are having a difficulty getting jobs and creating job opportunities for them.

JAY: You can almost say the objective of government policy was the opposite, was to make sure that unemployment never fell below a certain level, because that would, they would say, instigate inflation, their code word for higher wages. So if anything, government policy was the opposite. They wanted whatâ€”quote-unquote, this natural level of unemployment.

POLLIN: Right. Well, that’s certainlyâ€”you know, Milton Friedman was certainly the leading figure in advancing this view in the economics profession, and it spilled into policymaking. And the view was, right, actually, the government is incapable of achieving full employment anywmay; in fact, government is a barrier by, for example, setting up minimum wage laws; but that the government can do one thing, and that is to control the inflation rate, and so that’s what macroeconomic policy should be focused on.

Now, it turns out the way you control the inflation rate is by keeping the unemployment rate higher, because, precisely, if the workers get too much bargaining power, then that enables them to push up their wages. That then means that businesses will try to pass on those wage increases in terms of price increases to consumers. And that’s how you get inflation. So you have this notion of the tradeoff between inflation and unemployment.

POLLIN: Right. And that wasâ€”as we talked about in the last segment, that was due to the oil price shock. So the initial theory of the tradeoff between inflation and unemployment completely ignored the fact that there could be other majors sources of inflation. It was very convenient, by the way, because, okay, you get an oil shock, inflation goes up, you have a recession, and then the Friedmanites of the economics profession say, a-ha, there is no tradeoff; in fact, what we see is government efforts to reduce unemployment are just making inflation worse and aren’t reducing unemployment anyway; so let’s abandon the whole thing; the whole Keynesian thing was wrong. And that’s how we got the macroeconomics that we have now, which brought us to the Great Recession.