Is Waiting for Coal Jobs a Mistake?

President Trump has repeatedly promised to bring back coal jobs, and as a result, some miners are holding off on retraining programs. But is there a future for coal? We speak to economist Bob Pollin of PERI

President Trump has repeatedly promised to bring back coal jobs, and as a result, some miners are holding off on retraining programs. But is there a future for coal? We speak to economist Bob Pollin of PERI 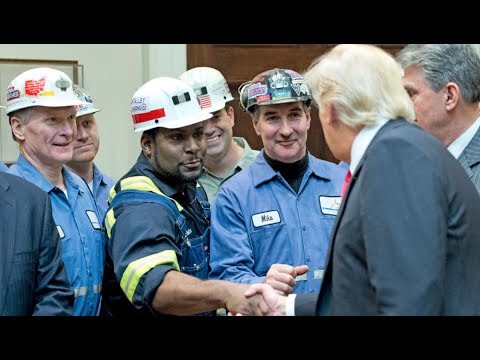 SHARMINI PERIES: It’s the Real News Network. I’m Sharmini Peries coming to you from Baltimore. Hundreds of coal-fired plants have closed across the country in recent years. The Appalachian Regional Commission says the region has lost 33,500 mining jobs since 2011. Coal is the most polluting of fossil fuels. The use of coal has been a key driver of human-caused climate change. Candidate Trump, seeking to win the Appalachian Region in the 2016 Presidential Election promised that he will end the war on coal, as he put it. He promised coal miners that he will restore their jobs. Upon taking office, President Trump has followed through, signing various orders undoing Obama’s Clean Power Plan which included many programs to retrain coal workers, the coal mine workers into clean jobs. Now according to Reuters, the report titled Awaiting Trump’s Coal Comeback, Miners Reject Retraining, at least according to this report, it seems that miners are taking Trump at his word and they’re waiting for those jobs to return.

On to discuss this issue with me, I’m joined by Robert Pollin, who is a distinguished professor of Economics and the co-director of Political Economy Research Institute at University of Massachusetts Amherst. His book, Greening the Global Economy and Back to Full Employment are some of the most relevant for this discussion. Thank you so much for joining us today, Bob.

ROBERT POLLIN: Thank you, Sharmini. I’m very happy to be on.

SHARMINI PERIES: So Bob, let’s take this very serious problem of having lost 33,500 jobs in the Appalachians. What’s your diagnosis of this problem? I know you’ve done the number crunching and you’ve studied this issue of how to make a just transition, so let’s start off by why these mine workers are rejecting the programs that are available for them for just transition?

ROBERT POLLIN: I think that, of course, all of us don’t wanna be forced into doing something, especially that’s so important dealing with your own livelihood, being told that your livelihood is going away and that you need to find some new way to earn a living and maybe your family’s gonna have to move. It’s totally natural and understandable that we would want to resist. I would want to resist, so I completely understand what these coal miners have in mind.

That said, there’s no way we can bring coal back as an industry. As you said at the outset, burning coal is a major cause of climate change. Now I don’t wanna just pick on coal, burning oil and burning natural gas are also major causes of climate change and those industries will also have to contract. Coal is contracting the fastest. It is the dirtiest source of energy, so we can’t bring those jobs back. What we have to do is be very aggressive about providing a just transition for the workers and the communities who are being hurt by the decline of coal.

SHARMINI PERIES: Now Bob, the false hope that Trump created during his campaign and now since he’s been in office, instead of implementing the kind of education, retraining … and here, what I mean by education is also talking about the impact of this industry to their communities, to their livelihood by way of health and to their families and so on. In your considerations, do you factor that in?

ROBERT POLLIN: Absolutely. I mean, here’s what I think. A just transition would include not just retraining because retraining sounds like, “Okay. We’re training for something but we have no idea what it is, and we don’t know where our next job is coming from.” We really need to think about reemployment guarantees, job guarantees. We need the jobs to be at comparable levels of pay so that needs to be guaranteed. It’s also absolutely critical that people’s pensions are protected, absolutely critical. Almost never discussed, but it is absolutely critical because when the firms go under, then they’re going to claim they can’t meet their pension fund obligations. In most cases, they can and must meet their pension fund obligations. In some cases where they really, really, really truly can’t, the government has to guarantee the pensions.

This was part of the original Clean Power Plan that you mentioned, under Obama, that even most Republicans supported before Obama left office. Mitch McConnell opposed it even though workers in his own state of Kentucky would’ve benefited. So the just transition cannot just, retraining, yes, but we need retraining relocation support, we need community reinvestment, and we need job guarantees with decent pay and we need pension guarantees. Put those things together and maybe we can start persuading the affected workers and their communities that we do have an alternative for them in mind and that they shouldn’t just be hoping against hope that the coal community is gonna be coming back.

SHARMINI PERIES: Now Bob, this of course makes sense. In the past, when we’ve spoken about this issue, you said there are some 66,000 coal jobs in the country. The Appalachian Region seems to have lost 33,500. Now, all in all, if we are talking about 66,000 jobs, this isn’t that large really, in the scheme of things. This is something that is rather doable. You’re looking at ways in which this could be done. Give us some hints into how you’re analyzing the problem in terms of going forward.

ROBERT POLLIN: Yeah. Well, I don’t know where that 33,500 jobs numbers comes from. I would have to check it. The numbers of which I can vouch for … we’ve studied them. These are numbers directly from the US Department of Labor, and that’s the number you quoted. At present, there are roughly 66,000 people in the United States employed in the coal industry. That includes everybody. The coal miners are about half, so there’s only about 30,000 coal miners in the whole country. The other is support staff, the office staff and so forth.

Now that’s 66,000 people, and their lives are definitely tied up with the coal industry. But we have to remember that the labor force in the United States is 150 million. So we’re talking about something like 0.001%, not 1%, not 1/10 of a percent, not 1/100 of a, we’re talking about 1/10,000 of a percent of all jobs in the US. We can find alternatives for these people. In a labor force of 150 million, it should not be a challenge, and to make sure that these are decent jobs, that they’re comparable levels of pay, that their communities are supported. We should do it under any circumstances but especially, as you said, this is not a huge challenge given that the numbers, relative to the magnitude of the economy, the numbers are tiny. We can do this without causing major budgetary disruptions of any kind anywhere.

SHARMINI PERIES: When you are talking about a just transition in the way in which you have outlined, it’s really about providing people the security that they need to move forward. It is a transition for a lot of people that, the coal mining jobs are a family tradition. It’s their heritage. It’s what they know, and to move them from that to clean jobs is a transition. You’re talking about building security, are there any other jurisdictions within the United States that is looking at these problems and is making the transition as an example?

ROBERT POLLIN: No, not that I’m aware of. I mean, I’ve been working with groups for the last year and a half in the State of New York and the State of Washington that … Now we have comprehensive programs that we are about to introduce. The New York program will be introduced next week, led by the coalition called New York Renews. And then in the Washington State, the program is led by the State Labor Council, the AFL-CIO, and the United Steelworkers. These are, I think, are very effective, aggressive measures to defend the well-being of the affected workers and their communities, and we show how it can be accomplished. It’s all very reasonable.

We should then start targeting the coal areas that we, as you were talking about, in Appalachia, even there. I mean, if we start talking about, for example, just land reclamation, that’s a decade-long project in Appalachia, reclaiming the land that was used for coal mining for alternative purposes. That’s a big project, and it can create a lot of jobs. Actually, a high number of those jobs are gonna be in areas of work such comparable to what the mining jobs have been. So there is a huge amount of opportunity. This needs to be integrated into the environmental movement and the climate movement as a top priority because until it is, people like Trump are going to keep using this and saying, “Well, the climate people, they don’t give a damn about the workers, the coal miners, and so forth.” But we need to show that we do. We need to show that we do and it can be done. Just transition, the term comes from the late-great labor leader Tony Mazzocchi who was also an environmental visionary. We need to follow through on Mazzocchi’s proposals for creating just transitions for workers affected by the environmental impacts of their jobs.

SHARMINI PERIES: All right, Bob. I thank you so much for joining us today, at least to have some diagnosis of this problem. I’m looking forward to the reports that you are working on, one, I understand, in New York and the other one in Washington. We look forward to having you back to talk about those.

ROBERT POLLIN: Okay. Thanks so much, Sharmini.