Austerity Not a Solution Pt.5 with Robert Pollin

Austerity Not a Solution Pt.5 with Robert Pollin 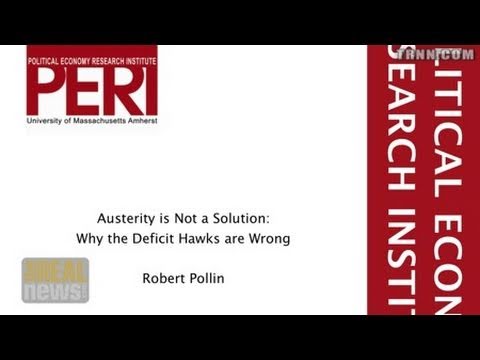 PAUL JAY, SENIOR EDITOR, TRNN: Welcome come back to The Real News Network. I’m Paul Jay in Washington. November elections are coming. Austerity hawks are beating the drums for cuts. So in our last series of interviews with Bob Pollin, being codirector of the PERI instituteï¿½thanks for joining us again.

JAY: So you’ve been making the argument that austerity measures are not a solution. Well, if they’re not, they’ve got to be a solution for somebody, ’cause there’s a lot of people pushing it.

JAY: And my question is, if the banks are sitting on $1 trillion, if a lot of the billionaires who are pushing for austerity are getting increasingly liquid and they’re sitting on mountains of cash, isn’t austerity good for them? I mean, in fact, isn’t it a solution to their problem? In other words, if the economy burns and we get into increased deflation and the cost of everything goes down, at some point don’t they just buy in and wipe out a lot of smaller competition, increase the monopolization in the economy? And in that sense it is a solution for what to do with all the money you’re sitting on if you happen to be a billionaire or an investment bank.

POLLIN: Yeah, I guess that is a possibility. But, again, I think it’s a very high-risk kind of endeavor, because, you know, we went through a depression in the 1930s, and if we’re going to stare down another one, you know, nobody really knows what’s going to happen. I mean, just look at the Republican Party. If we want to say they’re the party of big business, well, they’re getting pushed by some right-wing populists right now, and they can’t even get the people they want elected. I mean, look what happened in Delaware. Karl Rove, the big guru of the Republican establishment, denounced this right-wing Tea Party candidate for Senate, [Christine] O’Donnell, in Delaware, and she swamped the Republican establishment candidate. So that should send a signal to even, you know, our big shots on Wall Street and the mainstream Republican Party that if you really want to impose austerity and you really think you can trample on people that much and then you’re just going to buy up everything on the cheap, it is a very, very high-risk kind of strategy.

JAY: It may be, but the Tea Party politics, most of them are even more deficit hawks, or I should say austerity hawks, than even the mainstream Republicans. If you go through the list ofï¿½they actually want less government, less government spending. The guy in Alaska who won the Republican primary is for the ending of unemployment benefits. I mean, they’re certainly part of the austerity chorus.

POLLIN: Absolutely. And, you know, part of it is they have no idea what they’re talking about. I mean, I think it’sï¿½look, we’re in a very bad situation. Everyone agrees on that. And the right-wing populists, as right-wing populists traditionally have emerged in all economic crises, they turn on the most obvious target. So we’ve had a stimulus program. They say it’s failed; it’s all the government’s fault. They turn on immigrants. They say immigrants are taking our jobs away, so let’s get rid of them, and then there’ll be more jobs for us. None of those things make any sense, but that’s always been traditionally what right-wing populists are about, taking vicious positions against obvious targets, even if they make no sense.

JAY: But what I’m asking is, is there some intent here behindï¿½. Like, the traditional conservative view of what you do at times of crisis, economic crisis like this is you, quote-unquote, let the economy take its natural course, which is let things close down, let there be massive unemployment, you know, destroy all the overcapacity, and then you can rebuild on that destruction. And the thing you should do is get liquid and just wait for the moment to come back in again.

POLLIN: Yeah. Well, that certainly wasï¿½you know, the great economist, Austrian-American economist of the 1930s Joseph Schumpeter held to that position, and he actually celebrated the 1930s depression. And his term was, this is a good cold doucheï¿½he meant it as a shower. He said we need to cool down and let things crash, and his term, which is now this famous term, "creative destruction": let’s destroy all the excesses, and then we’ll come back much stronger. And so he was vehemently opposed to any kind of Keynesian intervention. We saw what happened in the 1930s. You know, fascism in Europe didn’t rise by coincidence during a depression. So I don’t think we want to play with that. Now, there’s the other kind of more establishment Republican view and business view, which has always been hostile to big government programsï¿½not that we necessarily have big government programs, but Social Security and Medicare are big programs, and Republicans and big business has always seen opportunities to get rid of those things and replace them with, you know, private opportunities. Like, if we didn’t have any Social Security, the argument goes, then those trillions of dollars could be spent on hiring, you know, clever Wall Street guys to help people with their 401(k)’s. Take Martin Feldstein, who’s probably the most prominent serious deficit hawk at Harvard University. He’s been against Social Security for his whole career. And there’s always a reason to get rid of Social Security, according to Feldstein, because it would be much better. Let people be responsible on their own, let them save their own money, figure out their own retirement, and that’ll be better than anything the government can come up with. So that’s been his position consistently throughout his career. And there’s others that would take that position. Same thing with Medicare. Why should we have Medicare? Why should we have the government subsidizing health care at all? Let the private market take care of it. Let private insurance companies make a bundle giving people health care. So that argument is certainly prevalent in these austerity debates that, look, what we’re doing is relying increasingly on government. It’s not working. It never works. It costs a lot of money. So let people decide on their own.

JAY: Of course, it’s okay if you’re on Wall Street to get $1 trillion of cash from the Fed, which is all public money, and then you can say, oh, too much government spending, after you’ve put all this in your vaults.

POLLIN: Interesting timing. Naturally, a lot of them would probably say, oh, no, I was never for the bank bailout to begin with. But we probably should check back on what they were saying a couple of years ago.

JAY: Well, if they’re not for it, let’s just thenï¿½I guess they’d be happy to tax it and just give it all back again. I don’t see that happening in a hurry.

JAY: Thanks very much for joining us, Bob.