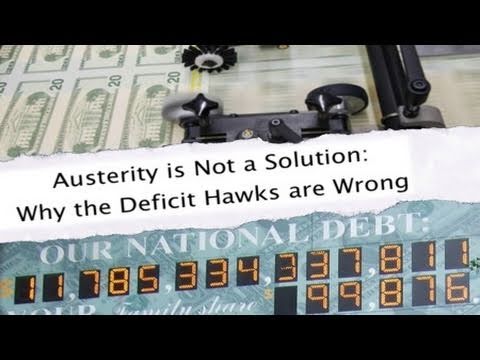 PAUL JAY, SENIOR EDITOR, TRNN: Welcome to The Real News Network. I’m Paul Jay in Washington. As the November elections close in on us, the biggest debate, of course, is about the economy. And we’re told the following. Number one, a higher deficit and more stimulus will cause inflation. It will cause business confidence to decline. Fiscal stimulus policies never work anyway. And the most important, at least we’re told so: a big fiscal train wreck is on the way. So does all this bear out under study and investigation? What are the facts? Well, Bob Pollin, who’s the codirector of the PERI institute in Amherst, Massachusetts, says more or less none of these are true, and we’re going to work our way through these main arguments with Bob. And Bob now joins us from Amherst and the PERI institute. Thanks, Bob.

ROBERT POLLIN, CODIRECTOR, POLITICAL ECONOMY RESEARCH INSTITUTE: Thank you very much for having me, Paul.

JAY: Okay. So we’re going to doï¿½for the audience’s sake, knowing where we’re headed here, we’re going to do four segments here, where we’re going to take on the four main arguments about what’s wrong with higher deficits and why increased stimulus is the wrong thing to do. So argument number one: large fiscal deficits will cause high interest rates, large government debts, and inflation. So, Bob, that sounds like almost a truismï¿½we’re told, at least. What do you say?

JAY: So why aren’t the interest rates bonds on going up? I mean, if I understand it correctly, the debt-to-GDP ratio now in the US is about 10 percent, which is at historic levels. The last time time it was anything close to this was during World War II. Why isn’t this happening?

POLLIN: Right. The fiscal deficit as a share of the GDP, the amount the government is borrowing as a share of the whole-economy GDP (and you’re right), is at around 10 percent, and it hadn’t been that high since World War II. Now, so, yeah, it’s an interesting question, because, yeah, read 95 textbooks, they will all tell us that the interest rates have to go up when the government borrows so much money. Well, the real reason it’s happened is precisely, ironically, because of the crisis itself. Because of the crisis itself, all the world’s bondholders, the people that actually play seriously in the global financial markets, are very risk-adverse. They don’t want to take big risks anyplace, and they see the US government securities, US government bonds, as the safest asset. So, contrary to what one would expect, what has happened is, even though the US is where the crisis originated (the crisis originated on Wall Street), as a result of that, the US gets this bargain where we get to put out government bonds, and all the world’s big money players are saying, let’s lap those up because they’re safeï¿½they’re a lot safer than, for example, government bonds in Europe. Now, government bonds in Europe might have been considered, well, the next safest place, until Europe had its own crisis, which in financial market terms is more severe now than the US crisis. So that’s the main reason why the US really is almost getting a free ride as regards this big government borrowing.

JAY: The traditional argument is that when the Fed and the federal government start pushing money into the economy, quote-unquote, by "printing it", even though I suppose they don’t have to actually print paper money anymore to do this, that these big debts and this kind of push of moneyï¿½they call it quantitative easing, I think, which is another one of these wonderful terms to kind of hide what’s going onï¿½it necessarily has to lead to inflation. And part of the argument here is that sooner or later this inflation has to kick in. Is that true or not?

POLLIN: Well, again, it hasn’t kicked in. And, again, the real problem today is not inflation. It’s deflation. The real problem today is that prices are going to keep going down. And when that happens, actual debt burdens go up, because if you owe $100 that you have to pay off next year and prices go down, that means the value of $100 has gone up. That means the value of your debt, the $100 of your debt has gone up. So deflation is a huge danger, because we already have an unstable financial market, and it will become still more unstable if deflation occurs. Inflation isn’t happening. Now, why isn’t it happening? Some of the deficit hawks actually acknowledge that there was never an argument for this. And, for example, Martin Feldstein at Harvard acknowledges that this has never been a legitimate argument. In order for there to be inflation, there needs to be some pressure in the real side of the economy. That is, there needs to be either labor is able to push up their wages or businesses have the power to push up prices. But if the markets are soft, people are lucky to sell things at even lower prices. So there is no inflationary pressure on the economy, and there actually never was a legitimate argument as to why you would get inflationary pressures during a recession. Now, we did have inflationary pressures in a recession in the 1970s, but that was because of oil prices shooting up. If oil prices shoot up again, okay, we may get inflation, but that will be because oil prices have shot up, not because of the fiscal deficit.

JAY: You wrote a paper recently called Austerity is Not a Solution. If what you’re sayingï¿½and it seems, you know, rather obviousï¿½there’s no inflation, then deflation seems to be the order of the dayï¿½then why the push for austerity?

POLLIN: Well, the push for austerity starts with the simple fact where you began, you know, the interview, which is that the fiscal deficit is large. There’s no debate about whether the fiscal deficit is large. It’s 10 percent of GDP. Again, it hasn’t been this high since 1942, and that was when we were fighting World War II. So the fiscal deficit is large. So it’s fair for people to be concerned about fiscal deficits of that order of magnitude. But they forget the next step. The reason the fiscal deficit is so large is because the crisis is so large. The crisis caused by Wall Street, by the Wall Street hyperspeculation and collapse of financial markets, meant that the economy was spinning into what would have been another Great Depression. The fiscal deficit stimulated the economy to keep us out of a 1930s-level depression. Now we’re still in a very severe recession, with unemployment officially at 10 percentï¿½and a better measure would be close to 20 percent. Another argument is, okay, well, you tried the deficit spending, and it didn’t work, so let’s go backwards and let’s go back to, you know, fiscal stability, let’s go back to a balanced budget, because obviously the deficit spending didn’t cure the recession. I also think that argument is wrong. The fiscal deficit has worked to some degree, but the fiscal deficit had a lot to fight with given the severity of the recession. So if we go back and say, well, let’s impose austerityï¿½and let’s be specific about what austerity means. I mean, sitting at a public institution right now, the University of Massachusetts, it would mean hundreds of people at my institution will get laid off. And when they get laid off, then they lose their homes, then they stop spending money in the community. That means more jobs are lost. That’s what austerity means in real life, and that’s no solution. That’s why the title of my article is Austerity is Not a Solution.