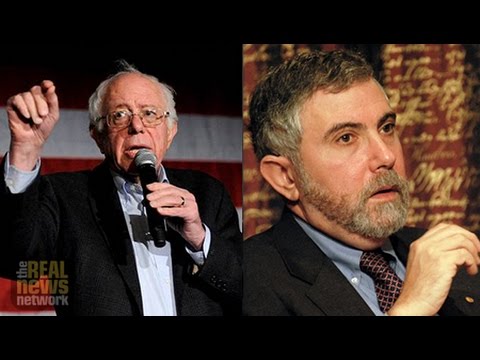 Democratic presidential candidate Bernie Sanders is making economic issues central to his campaign. What’s at the top of his agenda? Universal healthcare, free college tuition, and a $15 minimum wage. But while [inaud] liberal economists like Joseph Stiglitz and Robert Reich, are applauding Sanders, others like Paul Krugman are taking a different stance. In a recent New York Times column, Krugman calls Sanders’ proposals unrealistic and outlandish. And he accused the senator of embracing voodoo economics. But what are we to make of this criticism? Are Sanders’ economic proposals realistic?

Here to take on Krugman’s assertions is our guest Bob Pollin. Bob is a professor of economics at the University of Massachusetts, Amherst, and he’s also the co-director of the Political Economy Research Institute at the university. And his recent article in The Nation is titled “Bernie Sanders Will Make the Economy Great Again.” Thanks so much for joining us Bob.

ROBERT POLLIN: Thanks very much for having me, Jessica.

DESVARIEUX: So Bob, in your piece you note that Sanders critics like Krugman have supported many of the same economic proposals that he’s now running on like single payer. But we have Krugman now saying that they’re unrealistic. What do you make of his argument?

POLLIN: Well first of all, Paul Krugman and many other liberal democratic party associated economists, I think they’re making- the first big mistake is that they are mixing together what is realistic politically versus realistic economically. And there is important distinctions between the two. So, you can say it’s unrealistic politically because the Republicans control the Congress. Uh, Obviously nothing is going to pass as long as the Republicans control the Congress so if that’s our criteria, than why bother discussing economic policy at all until the Democrats take over the Congress. So, uh, obviously if Bernie Sanders wins the election and is the next President of the United States, by definition, the political dynamic of the country will have been entirely transformed. And at that point, Bernie Sanders needs to have an agenda, a program that is yes, inspiring, transformative and realistic. So on this specific question, the distinct question, are his proposals economically realistic, assuming he has the political power to enact many of them, my answer is yes. They are economically realistic.

DESVARIEUX: But folks are going to say that he might have the political power in the Executive branch, but of course the legislature, what we know of and the reality today is that the House and the Senate are controlled by the Republicans, and we know of their history. They’re extremely obstructionist. Um, so why would Sanders proposals even see the light of day and, and how could we not take into consideration the very reality that folks like Trump are doing so well with a lot of folks.

POLLIN: Well, you know, bizarrely I think the kind of Trump agenda in some ways is addressing a lot of the same concerns that Bernie Sanders is, and in a completely malign way, and Bernie Sanders is doing it in a benign way. I mean Trump’s, you know, insistence that the trade deals that the US has made have been harmful to workers–that’s true. That doesn’t mean we want to kick immigrants out of the country, it means we want to build a more egalitarian economy with full employment and decent wages and Sanders has much better proposals for getting us there.

But uh, you know, if we take it as a given that the republicans control the Congress, the Republicans will never vote for anything Hilary proposed, anything Obama proposes, much less anything Sanders, if that’s a given, then why are we bothering to do politics at all. Obviously we need to transform the political environment to make the kinds of proposals that Sanders is advocating realistic. And if he gets elected president, that would be obviously a gigantic first step on behalf of a transformative economic agenda.

DESVARIEUX: Alright Bob, at the end of your piece, you point out that the discussion over economic growth should be secondary to the issue of living standards for much of the population. Why is growth sort of always at the forefront of economic discussions in the United States? And why do you find it to be so problematic?

POLLIN: Well you know, growth means that the pie is getting bigger. So if the pie is getting bigger that makes it easier to give out more shares to everybody. So growth makes it easy to raise living standards. Now what we’ve experienced though, for over a generation, is the pie has been getting bigger at a slow rate so you now have a very high growth rate, but on top of that, the shares of the pie have been distributed increasingly unequally. So we have inequality. So to just have growth uh, unless you change our political environment and change economic policies, and make economic policies more egalitarian, that means all the growth is going to go into the pockets of the rich. And more or less as has happened certainly since the end of the recession. So growth is bad if it’s more unequal. On top of that if the economy’s going to grow, and we don’t change our energy system, then growth is going to be bad for climate change. It will be more emissions. So we need a more egalitarian growth and we need a growth that is consistent with reducing emission- brining emissions down to zero. So that’s why growth per-say, is not the answer.

DESVARIEUX: Bob, let’s turn and talk about some of the fighting going on within the Republican Party as well as the Democratic Party. We all know and have heard about what’s happening on the Republican side. But you point out in your piece that there’s a divide between the neo-liberal wing of the Democratic Party and the more progressive element within the party. Looking past this election cycle, how do you think this fight is going to continue to play out and if so, could it lead to a split even in the party- sort of rumblings that we’re hearing on the right. But should that be something that we could potentially see on the left as well?

POLLIN: It’s possible. I mean, I think people need to recognize that since Ronald Regan, both the Democratic Party and the Republican Party have been framed by the policy agenda set by Regan, which is government is bad business is good. The debate has been over, okay, how much do we all agree that government is bad? Uh, so Regan and George W. Bush and so forth, they all say government is awful but are perfectly happy to use government on behalf of business. Um, under Bill Clinton, it was okay, you know, the Regan agenda is pretty much right but we’re going to move it a little bit in the direction of workers. But very, very you know, minimally. Very mild. At the same time the Clinton administration favored the deregulation of Wall Street, favored all the free trade agreements and so forth. I would say that under Obama is different circumstances, but Obama did some major positive things, getting us out of the recession, uh, reducing unemployment.

But at the same time, we still see rising inequality, we still see massive, 43 million people that are with out health insurance. Emissions, carbon emission that are causing climate change, have not fallen significantly. So that’s where we are. So we need a transformative Democratic Party agenda. If we don’t get one, if we get a so-called neoliberal agenda which is essentially a pro-business Democratic agenda, I am very uh, discouraged about the future because we will not reverse inequality, we won’t raise the living standards for all married people, we won’t have more access to higher education. Wall Street will still dominate the economy and we won’t control emissions. So that’s why we do need a transformative Democratic Party agenda

DESVARIEUX: Alright, Bob Pollin. Always a pleasure having you on the program. Thanks so much for being with us.

POLLIN: Ok, thanks for having me Jessica.