Robert Parry: Obama's historic move to sign a nuclear deal with Iran sends a stern message to the new Saudi-Israeli alliance, which sought to thwart the deal and maneuver the U.S. into another military confrontation

Robert Parry: Obama's historic move to sign a nuclear deal with Iran sends a stern message to the new Saudi-Israeli alliance, which sought to thwart the deal and maneuver the U.S. into another military confrontation 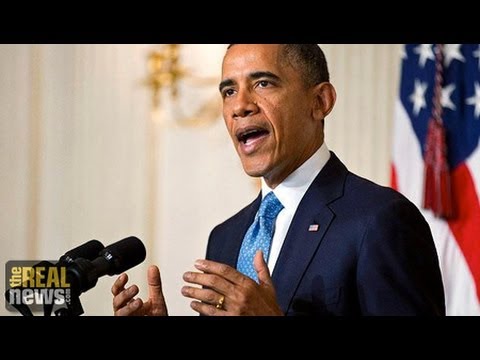 Now that Iran, the U.S., and five other world powers reached an agreement on Iran’s nuclear program, both the U.S. and Iranian governments have turned their attention to winning over domestic and international critics of this historic agreement. Israeli Prime Minister Benjamin Netanyahu has denounced the deal, calling it “a historic mistake,” and reasserted Israel’s right to attack Iran unilaterally.

Now joining us to discuss all of this is Robert Parry. He’s a renowned investigative journalist and founder and editor of ConsortiumNews.com, where he published his new piece, titled “A Saudi-Israeli Defeat on Iran Deal”.

Thank you for joining us, Robert.

ROBERT PARRY, INVESTIGATIVE JOURNALIST AND AUTHOR: Thanks for having me.

DESVARIEUX: So, Robert, you reported how the Saudi-Israeli alliance was previously successful in thwarting an agreement on Iran’s nuclear program back a couple weeks ago. What was different about this round of negotiations?

PARRY: Well, this time President Obama was much more directly involved in terms of setting down the orders to his diplomats, particularly Secretary of State Kerry, that this was not going to be–this deal was not going to wander off in some dispute with the French over some language.

And, of course, the Russians played a big role. President Putin is very much supportive of this deal and helped smooth the way to overcome some of the resistance and obstacles put in its way by the Saudis, the Israelis, and, sort of acting on the Saudi behalf, the French.

DESVARIEUX: Let’s talk a little bit about what the critics are saying about the deal. They’re arguing that despite the deal, Iran still is a threat to peace and stability in the Middle East. As we mentioned, the prime minister of Israel, Netanyahu, has publicly attacked the deal, saying that it’s a historic mistake. And conservatives, like in The Washington Post blogger Jennifer Rubin, she’s called for Israel to attack Iran. She Tweeted that the Obama administration, quote, “needs to reaffirm final deal will comply fully with UN resolutions. If not Israel should act”. Robert, what’s your response to that?

PARRY: Well, the neoconservatives continue to want to see more wars in the Middle East. That’s what they’ve been pushing for now for 20-some years, going back to the ’90s, when they began to lay out this idea that the only way for Israel to maintain its security is through having regime change in a variety of countries–Iraq first, Syria, and Iran being a third. So that idea from the neocons hasn’t really shifted. And they remain a very influential force in Washington, particularly at places like The Washington Post. And so they’re continuing to push this idea that the way you get security in the Middle East is by going to war with and ultimately overthrowing governments that have difficult or hostile relations with Israel.

DESVARIEUX: I want to talk about Israel and also the geopolitics and how this deal has shaped or changed the geopolitics in the Middle East. You have people saying that President Obama taking this stance is kind of playing the good cop, and where you have Benjamin Netanyahu being the bad cop in this situation, all both playing on the same side to force Iran to come to some sort of an agreement. What do you make of that type of argument?

But the problem becomes that the Israelis want to use a much more aggressive approach. Probably nothing would make them particularly satisfied that Iran would not present some threat, except having a different government that was friendly with Israel, which would be very difficult to achieve.

So I think you have in this case President Obama, and President Putin in Russia, and others, some other world leaders, deciding that the best thing is to have more secure oversight of the Iranian nuclear program and move forward and have some kind of normal relations with Iran that allows the world to better function economically and geopolitically.

But you do have these opponents, particularly Saudi Arabia, which despises Iran because it represents a different part of the Islamic world, the Saudis being the leaders of the Sunni sect and the Iranians the most powerful of the Shia. So you have that historical rivalry.

And the Israelis are joined into that on the side of the Sunni Saudis and share many of the Saudis’ geopolitical interests in the region. So what you’re really getting is kind of a change in the geopolitical landscape, where you have the Saudis and the Israelis, and odd couple relationship, no question, but working on the same side, and then you have the U.S., Russia, and some other world powers trying to make things function, I think, more effectively for the world economy and for them geopolitically. And the Iranians have increasingly come on board with that approach.

DESVARIEUX: And, Robert, in your piece you really lay out who the opponents are. You write that “Surely, Saudi Arabia and Israel will not abandon their efforts to torpedo a fuller agreement–and one can expect more sabotage by members of Congress, elements of the Western news media, and countries, such as France (a disgruntled P5+1 member), angling for lucrative business deals with Saudi Arabia.”

Can you just elaborate on what we should expect from opponents of the deal? And is the Obama administration and its supporters of this deal capable of warding off this sort of aggressive campaign?

PARRY: Well, the last part’s a good question, because it will require the Obama administration to have a discipline and a toughness that they have often lacked. But clearly President Obama wants this, partly because he realizes that the economic growth in the world will not come if there’s a further disruption of oil supplies in the Middle East that would come from the kind of conflict that the Israelis and the Saudis have in mind.

As far as what to expect from them, a lot of it’s going to be pretty obvious. There will continue to be op-eds by the neocons denouncing this agreement as some sort of sellout, some sort of Neville Chamberlain style appeasement, etc., etc. There’ll be–and there also probably will be more attacks on President Putin of Russia that will be somewhat motivated by this desire to split off this–split this new relationship that’s evolved between Obama and Putin. So you’ll see a number of attempts to make it difficult for the United States to press forward.

You’ll probably also see within the Obama administration and among the Democrats in Congress some of the more hardline elements try to undercut the move to a final deal within six months. But that deal within six months will probably look an awful lot like the interim deal, except with some more safeguards. The tough part may be whether or not Congress will agree to roll back the sanctions even if the Iranians make the agreement to go forward with a solid commitment on international safeguards.

DESVARIEUX: I want to sort of keep his line of predictions. And let’s talk a little bit about more of what we’ll be seeing. Do you think this deal is representing sort of us witnessing the beginning of the U.S. making a significant shift in the Middle East in terms of not–we hear President Obama always talking about this Asia pivot. Are we going to be seeing a sort of U.S. that is withdrawing from the Middle East a bit and focusing more on China’s influence and power?

PARRY: Well, I think, yes, you’ll see more of the Obama administration trying to look at the world in a different way than we’ve seen it, especially over the last decade or so since 9/11–the Iraq War, the Afghan War, and the other spinoffs of those conflicts. You’re seeing Obama try to do what he’s basically said he wants to do, which is to gradually pull back from those conflicts, get out of Iraq, as he has, reduce dramatically the U.S. role in Afghanistan, try to see if he can figure out ways to resolve these other problems, like the Syria conflict, like the Iranian dispute more through diplomacy than through military threats and war. That’s been [incompr.] entirely consistent pattern with him, but that’s where he’s generally moved.

And he does see, I think, the geopolitics as requiring or being more profitable for the United States if it refocuses in a much broader way, not just for Asia, but for the world generally. He’s been concerned about this overfocus on the Middle East and its intractable problems, and I think he’d like to see that be handled in a more multilateral way. And he’s not opposed to seeing the Russians play more of a role, as they can. He’s interested in putting together some of these coalitions that will advance the cause of a more peaceful situation there.

But, as I say, he has to still deal with some very powerful forces. And the Saudis, with their money and oil, and the Israelis, with their tremendous influence on propaganda and lobbying, can cause him a lot of trouble.

DESVARIEUX: Alright. Robert Parry, very interesting analysis. Thank you so much for joining us.