Evidence for Russian Involvement in East Ukraine Based on Shoddy Journalism

Robert Parry: The Obama administration and Kiev government claimed that Russian soldiers were present at the building occupations, yet it turns out that this assertion was based on photos the U.S. government provided to NYTimes and that the newspaper since has had to retract

Robert Parry: The Obama administration and Kiev government claimed that Russian soldiers were present at the building occupations, yet it turns out that this assertion was based on photos the U.S. government provided to NYTimes and that the newspaper since has had to retract 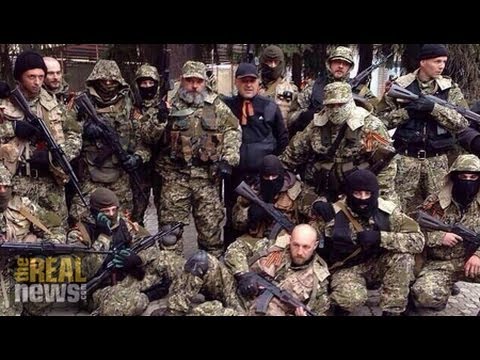 In recent weeks, as armed protesters took over government buildings in the eastern regions of Ukraine, we were repeatedly told by U.S. officials that Russia has been behind all this. But there has been little offered behind their repeated assertions.

Our next guest says the recent evidence trying to prove that Russian soldiers were among the armed protesters is bogus and is part of a propaganda stampede by media outlets who are concerned with promoting an anti-Russian bias.

Now with us to discuss this is Robert Parry. Robert is a renowned investigative journalist and founder and editor of ConsortiumNews.com. And his recent piece is titled “NYT Retracts Russian-Photo Scoop.

Thanks for joining us, Robert.

ROBERT PARRY, INVESTIGATIVE JOURNALIST AND AUTHOR: Thanks for having me.

WORONCZUK: So, Robert, The New York Times reported that the Ukrainian government had proof that Russian soldiers were behind the takeover of government buildings in Eastern Ukraine. They released these photos to prove that Russia was behind these takeovers despite Russia’s denial of involvement. Now The Times is backpedaling and saying that the photographs they printed were coming under scrutiny. What do you think is the significance of their retraction?

PARRY: Well, it’s always interesting when The New York Times goes with a front page story, a lead piece on Monday citing these photographs as evidence, the sort of slam dunk evidence that Russian troops had gone into Ukraine and were essentially instigating this uprising in these ten cities in Eastern Ukraine. The New York Times presented these photographs but apparently never really checked them out.

The photographs themselves really didn’t prove much. They basically–even if you were to accept them at face value, there are other explanations for why people might be in one place or another beyond the fact that they were sent there by the Kremlin.

WORONCZUK: Well, you’ve worked at newspapers before, and you’ve see that often they have to run corrections because they don’t always get the story right. Couldn’t some argue that this is just one of those instances?

PARRY: Well, it’s certainly an instance of getting something screwed up. But it’s–here we’re talking about a possible confrontation involving the United States and Russia. This is not a joke. This is not some minor story where a journalist can be sloppy–not that a journalist should ever be sloppy, but this is one where real lives are at stake. And The Times should have taken much more care in checking this material out. They were simply handed the material, apparently by the U.S. government, although the interim of government in Kiev was also peddling the same photographs, and The Times ran with them. They should have shown much more care and scrutiny before this, because this story, once it runs on the front page of The New York Times, is picked up by American news organizations across the media spectrum. Everyone runs with it as if it’s true. And that creates an opinion amongst the American people that is not based on fact but is based on this serious error. Now, it may be that there are Russians operating in the Eastern Ukraine. We don’t really know. But this evidence doesn’t support that, and in fact it turned out in a key place to be wrong.

WORONCZUK: Now, it seems that if the U.S. really didn’t want to go after Russia, that what they could do is point out some of the problems that maybe had–the problems of the Crimea referendum. And I just read a McClatchy piece from a couple of weeks ago that said that we haven’t seen any sort of sophisticated or detailed voting analysis of the referendum and that the amount of support that had been given to the referendum couldn’t really have come with the boycotts of the Tatars and Ukrainians within the region. So why would they go after the Russians this way, with this kind of flimsy evidence, instead of [crosstalk]

PARRY: Well, the U.S. is going after the Russians in a whole variety of ways. This is not the only one. And, frankly, the way the U.S. government has behaved has been somewhat reckless, in that it has been presenting a very one-sided narrative, ignoring some of the wrongdoing on the side of the coup makers who overthrew the elected government in Ukraine, the Yanukovych government. That’s what set off a series of events which Putin has been largely reacting to.

After that, there was a strong popular movement in Crimea, which has been historically part of Russia, to escape what was increasingly a failed state in Ukraine. Now, the vote–the referendum was done rather hastily, and there’s legitimate criticism that it wasn’t done with all the safeguards you’d like to see in an election, but I don’t know anybody involved in this that doesn’t believe that a majority of Crimeans favored getting out of Ukraine and joining Russia. There may not have been the high percentages that the vote showed, but most people I’ve talked to–pretty much everybody I’ve talked to agrees that that represented a popular feeling in Crimea, just because they had been always part of Russia, going back to the 1700s, and that they had real reason to be concerned about the chaos that was enveloping Ukraine. And there are practical things that–like, their pensions went up by joining Russia.

So I don’t think–I think the U.S. has been trying to create a case to make the Russians look as bad as possible, but it’s not been an objective or honest one. And I think what happened with The New York Times going with this very sloppy story about these photographs is just another example of how that’s worked.

WORONCZUK: Okay. Robert Parry, Thank you so much for joining us.