Pink Floyd co-founder and activist Roger Waters speaks to the Real News at the People's Mobilization Against the U.S. War Machine in New York City.

Pink Floyd co-founder and activist Roger Waters speaks to the Real News at the People's Mobilization Against the U.S. War Machine in New York City. 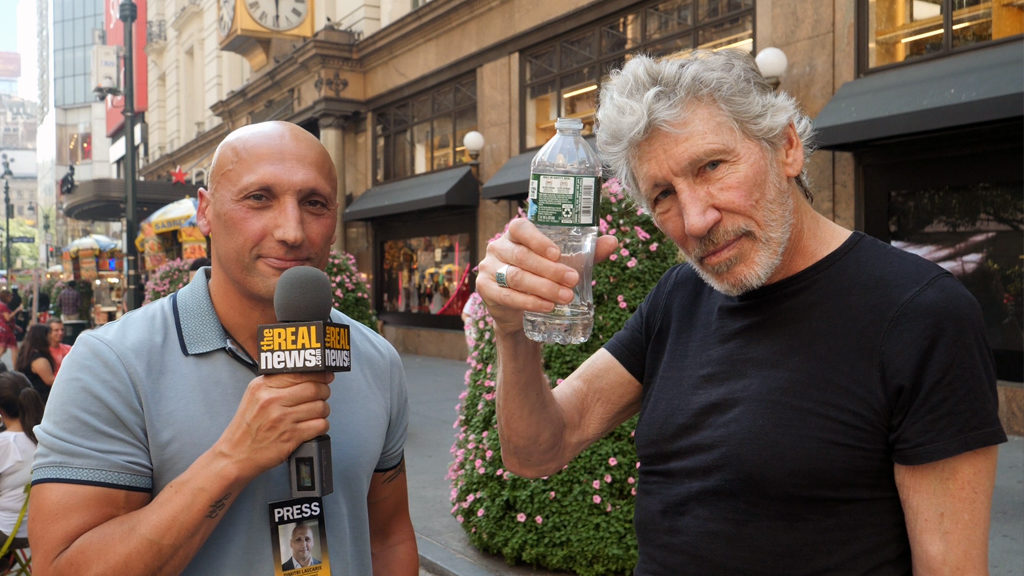 DIMITRI LASCARIS: This is Dimitri Lascaris reporting for The Real News Network from Harold Square in Manhattan.

I’m here today with legendary musician Roger Waters, also known widely around the world for his peace activism and his activism for human rights. We are here for the People’s Mobilization Against the U.S. War Machine and Save The Planet. Thank you very much for joining us, Roger.

ROGER WATERS: Not at all.

DIMITRI LASCARIS: Talk to us about how militarism is exacerbating the climate crisis.

ROGER WATERS: Well, one thing that the military does really, really efficiently is pump carbon dioxide into the atmosphere. I believe the U.S. military is responsible for some enormous percentage of the emissions all over the world. So that’s one thing where the two things are connected. What’s cool about today, I think, is that there are people who are specifically devoted to the idea of convincing their fellow citizens that climate change is real and that it is going to destroy the planet if we all don’t act collectively to do something about it.

Ignoring climate change and encouraging militarism are disastrous, except for the people who are making money logging in the Amazon or the people who make money at Raytheon and the other armaments industries, which are legend and legion. And huge amounts of money are made. Good thing about weapons is they go bang and then you have to replace them with another one. A few people get killed; so what? So long as you make a profit out of it, they don’t care. But I care, and you care, and all the people here care. That lady shouting cares, which is good.

DIMITRI LASCARIS: So let’s talk about a brewing conflict which is really capturing the attention of the world at this particular moment. And that is the conflict between the United States and its allies on the one hand, and Iran and its allies on the other. We hear a lot about how Iran is the world’s worst state sponsor of terrorism. We hear a lot about how it’s a human rights abuser. Are you okay?

ROGER WATERS: I nearly spat out my water there.

ROGER WATERS: Well, it’s nonsense, obviously. No, Iran isn’t. This is just a story that’s being made up by the Israelis and the Americans in order to create more confusion and conflict in the Middle East. And also, if possible, at the behest of the Israeli government, to get America to wage war upon Iran in order to blunt Iran’s influence in the Middle East. Because it’s a big country. Lots of people. It’s a very old ancient civilization, the Persian civilization, and the Israelis don’t want it there. They would prefer it was rubble. And so that’s why they’re encouraging the idea that it’s an enemy.

DIMITRI LASCARIS: And what are your thoughts about how we in the West should engage with the country of Iran in order to avoid a war? What do you think the best path forward is to avoid bloodshed in the Middle East in a conflict with Iran?

ROGER WATERS: Talk, obviously. Reintroduce and re-ratify the nuclear agreement that Obama came to when he was still president of the United States. Encourage those groupings of governments who still believe that that was a good thing and a step in the right direction. Encourage the young people in Iran in their resistance to the official kind of dogma of the ruling clerics. I think that would be a good thing. I mean, we really… Whenever one talks about Iran, you sort of have to go back to 1953 when they had a progressive socialist government who wanted some of the profit that was coming from the oil.

DIMITRI LASCARIS: That was Mohammad Mosaddegh.

ROGER WATERS: Exactly. And he said, “Listen, can we have some of the profit?” And BP–it was I believe–it went, “Are you insane? No, of course you can’t. What are you talking about? It’s ours.” And he went, “Well, no, I’m nationalizing it.” So they had him removed and imposed the Shah. And however many years, ’53 to ’79… And 20-whatever-5 years later, there was a revolution and now we have this. I kind of slightly deplore any country that’s run by what I call “religious extremists.” And they’re not more extreme than evangelical Christians in this country. Rouhani, or whoever is now in charge, is no more extreme than Mike Pence. You can’t get any more extreme than that.

So there are two sides to this thing. But Iranians are ordinary human beings. And they are vilified by propaganda in the West, unfortunately. And it may be that, between them, the evangelicals here and Netanyahu and his crew may persuade somebody. You’d need to find somebody crazy to push the button and actually go to war with Iran, because it will not be in-out.

DIMITRI LASCARIS: So the last thing I’d like to ask you, Roger, is you travel around the world; you’ve been doing so much activism; you interact with so many people who are concerned about what’s happening to this planet. What seems to be different about this week, here in New York City and around the world, is the level of engagement from young people.

DIMITRI LASCARIS: And in your interactions with people around the world, and particularly young people, do you sense that there has been a sea change, a dramatic change in the level of consciousness of young people about what’s happening in this world, and the level of their engagement?

ROGER WATERS: Well, that’s sort of why I’m here today, is to find the answer to that question. I sense that what you say is true. Actually, at my concerts, the audience are predominantly young these days. And they care about what I have to say in my songs and what I have to say, period. And I care about what they have to say. But I will be very interested to see how many of us turn out this afternoon. I know when I was asked to come here today… I don’t do this. You say, “Yeah, you’re a peace activist.” I don’t go to meetings. I’m really not a good meeting kind of a guy. But I think, “No, you can’t sit at home and pontificate about these things. You’ve got to turn up on the street and be part of it,” because that’s the only thing that’s going to push us forward.

We saw what happened with Occupy Wall Street back in 2011-12, or whatever. It was very quickly sidelined, crushed, vilified by the mainstream media, and sort of quelled quickly. But it hasn’t gone away. Neither have the protests that happened on February the 14, 2003; 30 days, approximately, before the invasion of Iraq. That, worldwide, was 20 million people in the streets saying, “No, we don’t want to do…” Saying this [people chanting “no war”]. And they haven’t gone away. But maybe they’ve been waiting to find meeting grounds between climate and anti-war movements, so this is important. Also because it comes on the back of a global massing of the unions and a strike about the denial of climate change. Workers of the world literally uniting, such as there are unions left anywhere in the world because the capitalist system has obviously tried to destroy them.

I wrote a new song recently, actually, which is about Standing Rock, because I had friends there. I didn’t go to Standing Rock, I’m slightly ashamed to say, but I had friends who were. And I mentioned the Pinkerton men. I then looked it up and saw that the Pinkerton agency survives to this day, and it does security and blah, blah, blah, blah, blah. But the word “Pinkerton men” has become generic to mean armed thugs who crush unions and crush protests like this, and who were there. So I think it’s perfectly legitimate to refer to them as mercenaries, Erik Prince and his chaps who were the ones who crushed the protest at Standing Rock for protesting the pipeline.

DIMITRI LASCARIS: Right. After doing his dirty work in Iraq.

DIMITRI LASCARIS: Well, it’s always a pleasure to speak to you, Roger. Thank you for coming back. And this is Dimitri Lascaris reporting from Herald Square in Manhattan, with Roger Waters.