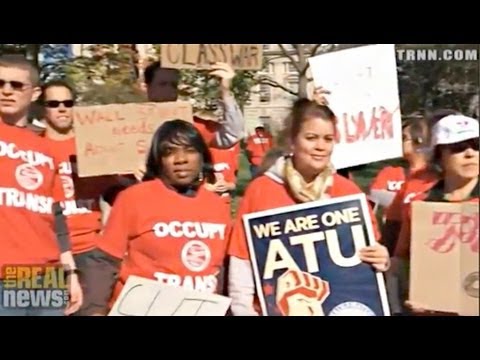 SUPPORTERS OF THE ROBIN HOOD TAX ARE FINALLY BEING HEARD. MINNESOTA CONGRESSMAN KEITH ELLISON INTRODUCED A BILL LAST MONTH THAT WOULD CHARGE HALF A PERCENT ON FINANCIAL TRANSACTIONS.

IF PASSED, THE BILL WOULD GENERATE 350 BILLION DOLLARS IN REVENUE EACH YEAR.

The money is in the hands of the most privileged group of Americans. Many of whom churn, and I donâ€™t say trade, I mean churn stocks bonds and derivatives on Wall Street. So one of the ways as Americans to recoup the money is to tax them when they do the churning of these financial assets.

ONE OF THE BIGGEST SUPPORTERS OF THE TAX HAS BEEN THE UNION NATIONAL NURSES UNITED. KEN ZINN IS THE POLITICAL DIRECTOR FOR THE GROUP.

HE SAYS THE ROBIN HOOD TAX WOULD GO TO FUND SOCIAL PROGRAMS IN EDUCATION AND HEALTH CARE WHICH SUFFERED SEVERE CUTS DUE TO THE RECESSION.

Ken Zinn, Political Director – National Nurses United: ): The fact of the matter is what we really need is this money to meet human needs. The deficit is not something for what this intended but it’s really intended to take care of the communities that are suffering so badly. About four years ago, Congress bailed out Wall Street to the tune of hundreds of billion of dollars and that money has not found its way to Main Street. We think it’s time that Main Street got bailed out.

THE ROBIN HOOD TAX HAS GAINED CELEBRTIY ENDORSEMENTS FROM THE LIKES OF CHRIS MARTIN OF COLDPLAY, BILLIONAIRE PHILANTHROPIST BILL GATES AND ECONOMIST JEFFREY SACHS. IN THIS PROMOTIONAL VIDEO YOU CAN SEE ACTOR MARK RUFFULO DRAWING ON A DOLLAR BILL A ROBIN HOOD GUISE â€¦..ONTHE FIRST PRESIDENT OF THE US – GEORGE WASHINGTON – THIS HAS BECOME A SIGNATURE OF THE MOVEMENT.

EVEN FISCAL CONSERVATIVES LIKE GERMAN CHANCELLOR ANGELA MERKEL AGREE ON A INSTITUITING A FINANCIAL TRANSACTION TAX.

AND ON OCTOBER 7TH AT A MEETING BETWEEN EUROPEAN UNION FINANCE MINISTERS, ELEVEN EU COUNTRIES VOTED IN FAVOR OF COORDINATING THE IMPLEMENTATION OF A FINANCIAL TAX. THE LIST INCLUDES: AUSTRIA, BELGIUM, ESTONIA, FRANCE, GERMANY, ITALY, PORTUGAL, SLOVAKIA, SLOVENIA AND SPAIN.

OTHER COUNTRIES COULD OPT IN TO JOIN AS WELL.

BUT THERE ARE CRITICS WHO SEE THE ROBIN HOOD TAX AS POTENTIALLY HURTING THE U-S ECONOMY FURTHER ESPECIALLY PENSION HOLDERS.

GEORGETOWN UNIVERSITY ECONOMICS PROFESSOR JAMES ANGEL SAYS FINANCIAL FIRMS WOULD PASS OFF THE COST OF THE TAX TO CONSUMERS.

James Angel, Georgetown University Professor: If you look at where a financial tax ends up it basically ends up

boomeranging back to investors at the end of day. Your mutual fund, your retirement plan thatâ€™s whatâ€™s going to end up paying the tax. And if you look at how its going to drive up costs for investors and the impact on the economy then you have to say is this a tax thatâ€™s going to cost more than it raises.

BUT FOR CO-DIRECTOR OF THE UMASS AMHERST POLITICAL AND ECONOMIC RESEARCH INSTITUTE, BOB POLLIN — ITâ€™S CLEAR WHO WILL BE TAXED UNDER THIS LAW.

The people who pay the tax are just like you and my buying a stick of chewing gum, itâ€™s the people on Wall Street who are are trading, they pay the tax. Now is it possible that they will attempt to pass on the tax by raising their fees to their clients or by seeing the price of stocks go up because to the transaction cost. Yes, thatâ€™s possible. How much will it occur we donâ€™t know. Professor Angel doesnâ€™t know this and there isnâ€™t research which tells us the extent to which the passthrough would take place. Of course, as Professor Angel knows fully well there’s competition in the financial markets. Are the people doing the transactions, are they going to automatically pass on their cost to the final consumer, to say the pensioners. They would like to but that means that the rate of return that the pensioners get is going to have to go down. In a competitive situation, a pension fund that is forced to pay these taxes is going to try to make it up some other way. In the end, we know the impact will be on directly to the people doing the trading.

POLLIN ARGUES THAT THERE ISNâ€™T RESEARCH TO QUANTIFY THE ACTUAL IMPACT OF THE TAX ON THE US FINANCIAL MARKETS. BUT WHEN YOU LOOK OVERSEAS, FINANCIAL MARKETS IN SOUTH KOREA AND THE UNITED KINGDOM WHERE THE HALF PERCENT FINANCIAL TRANSACTION TAX EXIST, MARKETS ARE STILL

IN THE UK, THE HALF PERCENT FINANCIAL TAX RAISES 4 BILLION DOLLARS IN ADDITIONAL REVENUE AND THE LONDON STOCK EXCHANGE STILL REMAINS THE TRADING CAPTITAL OF EUROPE. BUT PROFESSOR ANGEL SAYS THAT BASED ON A REPORT BY THE EUROPEAN COMMISSION, ECONOMISTS FOUND THAT THE IMPACT IN

GROSS DOMESTIC PRODUCT WAS COMPARABLE IN SIZE TO THE AMOUNT OF REVENUE BEING COLLECTED.

HYPER-SPECULATIVE TRADING, THE HUNDREDS OF BILLIONS OF DOLLARS RAISED

WILL BE POSITIVE FOR THE ECONOMY NOT NEGATIVE.

Assume that trading goes down by 50 percent. So part of the point of the tax is actually to discourage excessive hyper speculative trading. So I’m assuming that the market adjusts. There will be less trading because people don’t want to pay the tax. So I’m assuming the tax discourages excessive trading and even with discouraging excessive trading, the markets contract, we still can show how you can raise somewhere in the range of 300 billion dollars per year which would be extremely important for meeting social needs into the country and long-term deficit reduction.

LONG-TERM DEFICIT REDUCTION AND RAISING REVENUE FOR MAIN STREET ARE THE OBJECTIVES.

BUT PROFESSOR ANGEL SAYS IF THE DRIVING FACTOR IN ISSUING THE TAX IS TO ACT AS SOME SORT OF RETRIBUTION FOR WALL STREETâ€™S WAYWARDNESS IN CAUSING THE RECESSION, THE TAX SHOULD HIT PROFITS DIRECTLY.

James Angel, Economics Professor, Georgetown University: If the goal is to stick it to Wall Street and the fat cats, you should tax profits directly. That would be a much simpler way to do it.

Bob Pollin â€“ Co-Director of PERI, UMass Amherst: We want to tax trading whether or not there is a profit. Itâ€™s the trading itself. As a consequence itâ€™s a much simpler tax. Itâ€™s a tax strictly in the trade. Do we know when thereâ€™s a profit? How do we measure the profit? All of these get into complicated accounting that isnâ€™t going to get settled until the end of the year. In this case, weâ€™re taxing the point of a simple activity of a trade. We have a tax rate. It doesnâ€™t matter whether or not you profit. You pay the tax.

THE UNITED STATES IS NOT NEW TO THE IDEA OF A FINANCIAL TRANSACTION TAX. IT CAME INTO EFFECT UNDER WOODROW WILSONâ€™S ADMINISTRATION IN 1914 AND THEN EVOLVEDâ€¦AND BEGAN TO TAX THE MARKET VALUE OF EACH STOCK.

BUT IN 1965, CONGRESS VOTED IT OUT WITH THE GENERAL VIEW THAT IT COMPLICATED SECURITIES TRANSACTIONS. PROFESSOR ANGEL ARGUES THAT TAX HISTORY WOULD REPEAT ITSELF.

SOT (James Angel, Georgetown University Professor â€“ 1:30-1:55): It was a stupid tax. Thatâ€™s why they decided to get rid of it. Even when they needed revenue for the Vietnam War, they realized that this tax was doing more harm than good.

PROFESSOR POLLIN SAYS THAT THIS VERSION OF THE TAX IS NOT COMPLICATED AT ALL BUT SIMPLE.

The basic concept is could not be more simple. Th basic concept is not more complicated if I go to buy a pack of chewing gum and pay a 6 percent sales tax. In this case, if I got buy a share of a stock I pay a one half a percent tax. The basic concept could not be more simple. What makes it complicated is the effort by the of Wall Street lawyers and the like to add all kinds of exemptions and you what happens is that you get hundreds of pages of legal documents and then you get hundreds of lawyers figuring why their client should be exempt. saying they should be exempt. . The simplest way to apply the tax is to do it without exceptions. Just do it across the board. Just get used to it. If you want to trade on Wall Street, you’re going to have to pay the tax.

THE ROBIN HOOD TAX BILL BROUGHT FORTH BY REPRESENTATIVE ELLISON IS NOT THE FIRST OF ITS KIND. LAST NOVEMBER, DEMOCRATIC REPRESENTATIVES PETER DEFAZIO OF OREGON AND SENATOR TOM HARKIN, AN IOWA DEMOCRAT, PROPOSED A TAX THAT ONLY CALLED FOR A .03% FINANCIAL TAX.

THAT WOULD MEAN THAT FOR EVERY ONE THOUSAND DOLLARS IN TRANSACTIONS, THEY WOULD COLLECT 30 CENTS.

BY CONTRAST, IN ELLISONSâ€™ BILL FOR EVERY ONE THOUSAND DOLLARS IN TRANSACTIONS THE GOVERNMENT WOULD COLLECT 5 DOLLARS.

THE DEFAZIO MEASURE STILL REMAINS IN THE SENATE COMMITTEE ON FINANCE.

A SIMILAR FATE COULD AWAIT CONGRESSMANâ€™S ELLISONâ€™S BILL IF IT FAILS TO MUSTER UP ENOUGH SUPPORT. CURRENTLY THE BILL HAS TEN CO-SPONSORS.

THE REPUBLICAN CONTROLLED HOUSE DOES NOT LOOK LIKE IT WILL BE CHANGING HANDS IN NOVEMBER WITH DEMOCRATS TRAILING BY 25 SEATS. AND BEING IN THE MAJORITY MEANS REPUBLICANS WILL CONTROL WHAT IS PUT TO A VOTE ON THE HOUSE FLOOR.

BUT ORGANIZATIONS LIKE NATIONAL NURSES UNITED PLAN TO CONTINUE THEIR FIGHT BY HOLDING RALLIES OR SIT INS IN CONGRESSMANâ€™S OFFICES â€“ WHATEVER IT TAKES TO SPREAD THE WORD.

POLLIN EMPHASIZES THAT PEOPLE MUST EXERCISE THEIR VOICE TO SEE THIS BILL BECOME A REALITY.

Its’ up to the political process, policy makers to set the rules by which anyone can operate. I will assume that each and every trader is going to do things to make as much money for him or herself within the rules of the game. Most people will try to make as much money within the rules of that are set down. The problem is that the politicians deregulated the financial market and allowed this irresponsible and unsocial behavior, socially destructive behavior to consume Wall Street and in turn by consuming Wall Street, consume the entire global financial market. But it is up us, but it’s up to an engaged public to set the terms under which trading takes place that is socially beneficial and not harmful.

A STRONG MESSAGE FOR THOSE ON MAIN STREET LOOKING FOR WALL STREET TO TAKE SOME ECONOMIC RESPONSIBILITY.